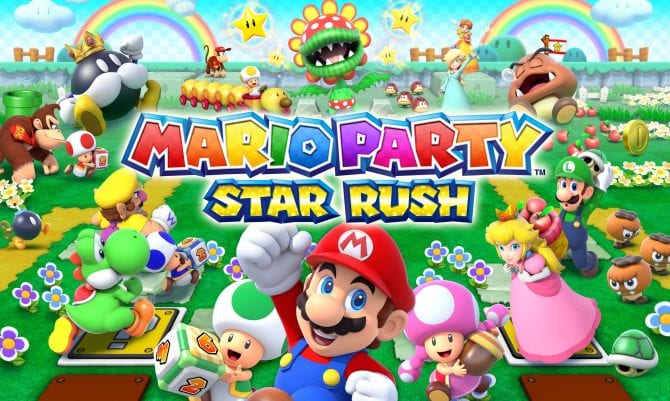 In the main mode Toad Scramble, players move about freely on tile-based maps. The goal is to collect as many stars as possible, and every level has a certain number of boss battles where all four players work to try and defeat the boss, and win a number of stars. Coins can also be converted to stars at a 10-1 ratio.

All of this is done with the new feature of simultaneous play, where all four players roll their dice at the same time and move about the board at once. This is a noticeable improvement from previous Mario Party games, as having to sit around and wait for your turn was always the least enjoyable part of the experience.

You can also recruit the rest of the Mario gang to your party in the form of allies. Collecting them takes up time at the beginning of each game, but it can determine the winner in the long run. Equipping an ally uses their special dice, but all other members of your party also throw their own dice with a possible 1 or 2 roll. This means that those with a lot of allies have insane mobility around the board, often rolling in the double-digits every time. Allies can also help in boss battles, and overall, they were a worthwhile and fun addition in Star Rush.

However, a great deal of Toad Scramble is unbalanced and even unfair. For example, the game rewards players for playing poorly by dishing out “coin bonuses” at the end of each match. Although a couple rewards have to do with playing well, the majority of them give out coins for players who just played badly. These include coins for whoever moved the least spaces, had the least allies, landed on a boss square the least number of time, etc. Even if you played well, there could still be a chance a player who played poorly all-around could take top spot due to the coin to star conversion. A poorer player coming close to, or even winning, over someone who played better doesn’t make a whole lot of sense.

Although the majority of the mini-games felt fresh and played well, some of them just relied on chance. Winning a mini-game can turn the tide in a close match, and having to hinge that win on guessing which door has the most apples behind isn’t very fun or fair. There is also a “finisher bonus” rewarded to whoever delivers the last punch in a boss battle. If all players are doing well and dealing equal damage during the fight, it really just comes down to who hits them last.

As well, at the end of each game there is a “lucky ally” bonus where the game chooses one ally at random to give that team an additional five coins. In one game, I had acquired the maximum number of allies I could, but ending up losing the entire game as another player with one ally received the five coins necessary to acquire one more star and beat me. Even if you play as well as you can, luck can rob you of a victory.

The most frustrating thing about Mario Party: Star Rush though is that it still lacks online multiplayer. Mario Party games often get exponentially more fun depending on the number of real-people you play with. This is easier for consoles, as it is much more likely (and affordable) that a player could have multiple controllers for their home console where a group could gather for couch co-op, as opposed to a group of friends who all happen to own their own 3DS devices. Nintendo tries to compensate for this by offering guest software, where one game-owner could host for three others who downloaded the guest software from the Nintendo eShop. Still, everyone needs their own 3DS.

Star Rush’s AI difficulty settings are decent for offering up a casual or challenging experience for all players, but playing against AI can never compare to the feeling of playing with actual people, even if they aren’t in the room.

Overall, Mario Party: Star Rush has some fun and original mini-games, and looks great. Toad Scramble’s new fast-paced simultaneous is enjoyable enough, but it’s too bad it can’t be played online. What is also unfortunate is that luck plays way too much into who wins and loses and will inevitable frustrate players. Some minor tweaking along with the inclusion of online play could have made this one of the best entries in the series in a long time, but instead, it’s another disappointment.