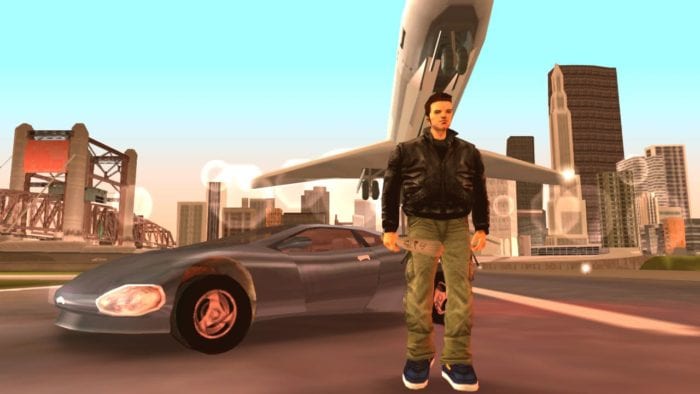 Truly, the Liberty City we found ourselves scrabbling around in during GTA III couldn’t be more aptly named. It was gaming’s first true dystopia. Running your finger across one of the city’s streets you would come away with grime under your fingernails, yet the streets were alive in their filth – they bustled and lived and breathed, and murdered, and stole, and, most importantly, they ignored you. They came alive with possibility but never rubbed your face in it, never concealed the corrupt foundation it all swayed on, celebrated it in fact. Though there’s been little tweaks here and there – new cities, new protagonists, and hell even new hardware – the core principals remain.

What’s urban is what’s intimate – it’s what we know and how we feel. The Liberty City of GTA III was an instant cipher for where we were: the blank cheque of a new millennium with all the stiff cynicism and fear necessary to gaze forward with any real purpose. Its billboards and in-car advertisements pointed to the ugly beneath the facade; it brought the mirror up to your face.

Some places live on in your mind, given life by a few signature images, a smell, a color; you won’t remember every single detail and crucially you won’t remember everything right, but you’ll have a vivid lie in your mind and this is far more important. It’s in this way that Liberty City excelled: it didn’t give you everything, and it wasn’t the biggest map you’d come to call home – not by a long shot – but it had character, richness, and the right combination of colors and details to deliver just the right emotional spike to the vein. Everything about it had the illusion of vastness, and of complication; when in fact what was there was simple and uncluttered. The best modern comparison is Arkham City – what it lacks in size it makes up for in teased layers of depth and character. It feels like Gotham and that’s the point. It’s the silent understanding that runs underneath it all like a current.

It was the same in Rockstar’s analogue of New York City. The yellow cab flew by you at just the right time; you swerved by an assortment of Chinese banners and signs; the rain came down in buckets; and the Callahan Bridge, and Staunton Island beyond it, winked at you in the distance with silent promise. If you go back now you’ll swear it was bigger. It was. It still is where it counts the most: in your head.

One of Grand Theft Auto III’s biggest complaints was that its missions were very simplistic; they could get a little repetitive; and the protagonist had zero input or influence on the narrative. Fifteen years later, and with some missteps here and there, it’s fair to say that these complaints are in fact the game’s greatest strengths. Having a likable villain is fine; the water gets muddy when trying to push a villain out of villainy altogether. The problem with GTA V, and to a lesser extent GTA IV is this: it is very difficult to engage with characters who find themselves spun into the center of a moral dilemma with families and legitimate ambitions, when in between cutscenes they’re killing folks, stealing cars, and ensuring new police recruits hit the ground running.

Claude was the ideal goon. Voiceless, nameless (at the time), and with no clear connection to anyone, he was a go-between for us into the underworld – the boatman on the river Styx. His silence was also incredibly cool: he infiltrated and rose up through the ranks of Liberty’s underbelly with not a word spoken – his actions commanded the respect of his peers. As El Burro says to him by way of an introduction: “You are new in Liberty, but already you are gaining a reputation on the streets.”

Simplicity was everything. The attraction was that its missions threw out the bombast of its peers: they were simple affairs of driving, following, murdering, stealing – all the things a criminal henchman would do. It was their execution that breathed life into the game. Something as simple as driving to a location and killing someone was jolted awake by the wealth of options afforded to the player. Killing a mob boss before he reaches his house: do you drive up alongside his car and spray it with Uzi fire? Perhaps wait up the road with a handful of grenades at the traffic light? Or my own personal favorite – drive to his house before he does and block up his drive way with cars, and then spray his bottle-necked car with M16 fire until it explodes. Emergent styles of play like this were a rare thing; they still are now.

Games like Saints Row and Just Cause amp it up to eleven for the tutorial in an effort to spice things up, but you only end up losing your sense of scale, and progression. The wackier things are, the less intimate they are. GTA III understood the compelling nature of simple, grisly tasks carried out with complete freedom of approach. The heists in GTA V are its piece de resistance, but it’s difficult not to feel as if you’re playing a gigantic set-piece – because you are. They are fun, and they are compelling in the same way the Uncharted games can be, but they aren’t Grand Theft Auto.

It was the man. It was the city. These things have been constants, and the variables have produced varying degrees of success. For every stoic and thoughtful Niko Bellic there’s a whining, moaning Michael; for every no-nonsense, fun-loving Luis, there’s an insane and ridiculous Trevor. The one constant success has been the environment, and Rockstar’s understanding of its power over us. Every time I walk through a paint-by-numbers open-world effort, devoid of character and texture, beautiful and vacuous, I am haunted. I think of the very first mission in GTA III, and how appropriately named it was even then: Give Me Liberty.