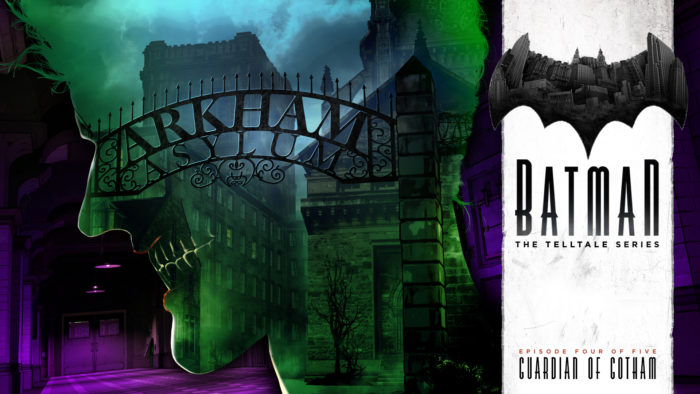 Episode four of Telltale’s Batman series, titled Guardian of Gotham, for the most part, provides the necessary preparations for the series to really go out with a bang with episode five. As we continue the story of Bats and Bruce following the pretty climactic events of episode three’s final minutes, we’re introduced to a familiar face, see Bruce left with almost nobody to turn to, and are left with an incredibly tough and significant decision which looks to have a direct impact on how episode five plays out. These were ultimately the highs of a pretty short episode that didn’t quite deliver the immense moments of those that came before it.

If you’ve seen the trailer for episode four, you would have seen that Bruce finds himself inside Arkham Asylum with the most iconic villain in the Batman universe – The Joker. Both the psychotic villain and the asylum we found ourselves in definitely had me intrigued during my time playing, with Joker’s friend or foe status impossible to pin down. I was sure the asylum would hold some intense moments for Bruce, but both the setting and Joker himself played a far less central role in this episode than I had envisioned leading up to playing it. Though it was a brief cameo for now, I’m pretty confident it’s not the last time we’ll see Joker. At least I hope not, as Telltale’s version has plenty of unexplored potential. This meeting merely scratched the surface of this mentally unstable character.

Making your way through episode four, it’s difficult to see how Bruce is going to come out on top. He’s lost his business, there’s a huge terrorist threat, the people of Gotham are against him, and his best friend and mayor of the city has turned their back on him. The story is no longer just one about the Wayne family name’s legacy, and the downfall of the millionaire playboy. This is now about the battle for Gotham from a number of big players.

As the episode takes a look at the hostilities between Dent’s forces and the Children of Arkham, we get another look into the conflicted psyche of Harvey. While there was a definite deterioration of Dent’s mental stability in episode three, he’s gone full-blown Two-Face from the get go in episode four. This, along with a few other moments in Guardian of Gotham had me looking back and deeply regretting decisions I had previously made. It’s a show of Telltale’s storytelling prowess that all decisions feel viable, and those consequences feel just. As we come toward the end of the series, the multiple layers of decisions I’ve made in the series so far finally feel like they’re coming into play in substantial ways, and I can only imagine how things will wrap up in the finale.

Sadly, in its haste to move the story forward, one plot point in particular felt a little under-baked and didn’t feel like it made sense in relation to the choices I had made thus far. Having spent three episodes establishing a relationship with a particular character, the seemingly unchageable event felt disconnected from my story. It may not affect everyone, depending on the choices you’ve made, but some players may find it equally confusing.

Though the episode as a whole felt good, albeit not on the same level as those that came before it, the detective mode section was grating and underwhelming. Linking clues together in previous episodes had felt a little more challenging and provided logic-based breaks from the QTE-action scenes. Instead, episode four’s was painstakingly obvious and none of Batman’s findings after he’d pieced everything together felt groundbreaking. In a series that’s done well to keep these detective sections feeling fresh and more interesting than simply linking lines between obvious clues, it was disappointing that the mechanic felt shoehorned in. The story could have continued had the chapter gone in a different direction, and the episode as a whole would have felt better off as a result.

In stark contrast to this, however, was arguably the biggest decision the series has posed to players so far. No decision prior to this has felt like making the wrong choice could single-handedly screw up your chances at coming out on top. What’s more, this one delivers a choice you’ll have to make not from an emotional perspective, but from a tactical point of view. As the episode drew to a close and I faced the immediate repercussions, it’s clear that this will have a major impact on each player’s individual experiences in episode five, and overall conclusion to the series’ story.

For the first time in the series, too, I ran into a few technical hiccups that, while not breaking the game, do become jarring in a story-driven title. Lip-syncing seemed to be hit and miss throughout, and there was a moment where Harvey’s mask simply appeared way earlier than it should have done. This is nowhere near on the scale of the significant crashes that players suffered from with the release of episode one, but something I hope Telltale squashes in episode five to deliver the high-quality finale the series deserves.

Episode four is difficult to judge as a standalone game. On its own, it offers a fairly standard run through the latest events of Bruce and Batman, with nothing groundbreaking until the very end. When looking at it as part of the bigger picture of the series, however, it does a great job of setting the stage for one hell of an ending.

Clocking in at about an hour and a half, episode four did what it had to do to drive the story along without overstaying its welcome. While I would have liked a little more explanation from one of the plot points that was skimmed over way too quickly, Guardian of Gotham was otherwise a prime example of Telltale’s character development and relationship expertise. What felt like an episode that would be focused on the Joker and Arkham Asylum, turned out to be a general overview of how relationships and decisions had impacted the story so far, and how these will affect the events of the finale. My hope now is episode five neatly ties all of these plot points and relationships together in a neat little bow, and doesn’t leave me wishing that some of the action had spilled into Guardian of Gotham, instead.