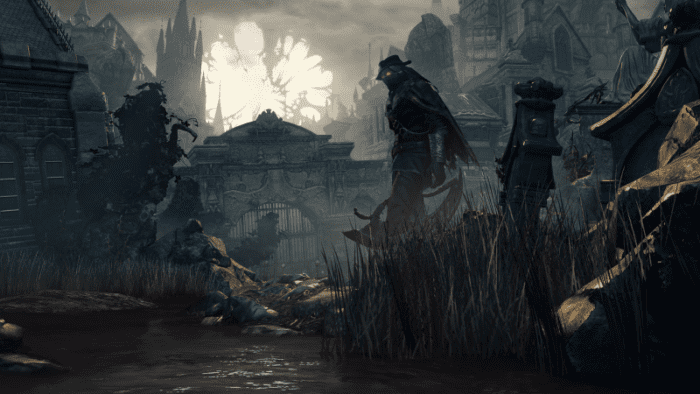 Horror is a very finicky genre that has always shifted in both tones and themes since its inception. This is especially true for gaming as advancements in better graphics, sound, and storytelling have allowed developers to move players from simple haunted mansions to entire cities of monsters. While there have been dozens upon dozens of different horror games released over the years, one has truly embodied everything that makes horror games so terrifying and it wasn’t even billed as one.

From Software’s Bloodborne is essentially what happens when you give a shot of adrenaline to a Dark Souls game. The combat is faster, enemies are more aggressive, and everything is at least 100 times bloodier than any From Software game before it. Set in the city of Yharnam during one of its nightly hunts, you take the role of a hunter who is tasked with exterminating the plague of beasts that have run rampant through the world.

From the beginning, Bloodborne reinforces the concept of paranoia and dread that lingers over this fallen city as the townspeople attack anything unfamiliar. You, in theory, are here to help them, but their distrust is instantly felt, and it’s intensified by the ramblings of NPCs you can interact with behind various doors. While you are there to look for a cure to the sickness plaguing this town, your interactions with the various side characters already make this task feel like a lost cause. This helps build the concept of the player being unable to trust anyone around, making you feel utterly alone in this adventure. By isolating the player and instilling a sense of mistrust in the other characters, this naturally gives us an uneasy feeling during interactions with others.

Now what distinguishes it from the other fantastic horror games that have released is that Bloodborne isn’t afraid to break the typical horror conventions we know. It takes extreme risks with its storytelling, design, and setting that we typically don’t see in modern games. While it does borrow heavily from the Dark Souls series, it still offers up a unique experience that no game has been able to replicate yet.

Most horror games offer some semblance of hope or an ally that we can rely on for some sort of help. BioShock gave us Atlas as a sort of Vergil to our Dante, Resident Evil offers up a partner to help you in dire situations, and even in the Amnesia games there were notes to help relieve the isolation and loneliness. Bloodborne has a few instances where it seems like you have possibly made an ally, only to have those hopes dashed away before the player. You don’t win in the world of Bloodborne, you just make it to the next day. Once you leave the Hunter’s Dream (Bloodborne’s hub world), you are alone and there is no one holding your hand, telling you where to go.

It’s this organic exploration that helps develop some of the most frightening scenarios in Bloodborne, due to you never knowing what horrors could be lurking around the corner. While there are some monsters that appear frequently, there are many creatures in Bloodborne that only appear in one area and are then never seen again. By doing this, it constantly keeps players guessing and makes them incredibly cautious every time they enter a new location.

From Software also doesn’t give many of their monsters big, dramatic reveals like other horror games. There are no cutscenes or big set piece introductions, instead the developers just make these beasts part of the world itself. Enemies lumber in the distance, reminding players that they’re always there waiting to make you their next meal. It’s a smart way to design encounters and gives users a chance to let their own fear grow as they wonder what powerful moves these creatures could unleash.

There is also a chance for you to stumble into areas you shouldn’t have, ones where the beasts are far tougher than you – yet you will never know until you actually muster the courage to fight them. This allows Bloodborne to break a lot of the linear designs that most horror titles face and in essence become the closest thing yet to a true open world survival horror game.

In typical From Software fashion, most of the true details are hidden away behind item descriptions, dialogue, and visual cues, yet several general themes are easily understandable. Usually in horror games, developers, authors, or directors try to make the antagonist personal in some way to the hero/heroine in order to help establish a connection with the reader, yet Bloodborne skips this idea entirely.

The massive cosmic horrors known as “The Great Ones” have no tangible connections to your lone Hunter and the developers double down on this by having everyone around see them as gods of a new age. (Which has caused almost all of the Yharnamites to go insane and perform an insane amount of rituals, sacrifices, and experiments to understand them) You are just another human to these beings and just the smallest blip on the radar in this world. There is nothing special about your character and it’s clear that most of “The Great Ones” don’t even see you as a threat since only two fight you in the actual story

Yet, Insight is probably Bloodborne’s most brilliant mechanic as it not only slowly scales up the difficulty with the player but begins to unravel the world around you. The concept is the more Insight you consume the more dangerous enemies will become (usually with a few new moves), but it’s more than that. You are tapping into forces beyond your comprehension and there is a threshold point where the cosmic horrors that have been watching you fully appear. Enemies now are more twisted and their visual designs reflect the true madness that has plagued this town.

It’s a brilliant mix of Victorian and Lovecraftian themes that help reinforce to the player just how bad this city has gotten and that you are dealing with things you couldn’t possibly fully understand. These ideas are typical of Lovecraft’s work but are only enforced further by the classical Victorian concepts such as dread, falling from grace, and hubris. This allows From Software to create some truly horrific enemies that have essences of both these horror genres.

However, all horror is subjective, so what might scare one person could be laughable for the next. Yet, that doesn’t mean Bloodborne is a bad horror game or make it any less of a masterpiece in video game scares. It’s the macabre storytelling, world, and design choices that make it a frightful experience. Yet, what makes it the best horror game of the modern era is its willingness to make players not only feel insignificant but downright useless. You’re not a hero or the one person who can save the day like many horror games place you as, just another nameless hunter out at night. It’s up to you to muster up the courage and not end up as just another corpse for the Yharnamites fire. Bloodborne makes its struggle grand, yet deeply personal at the same time.

Everyone’s mad in the world of Bloodborne and it’s up to you to try and put this puzzle back together. There is no saving the day in Bloodborne, only surviving long enough to see the light.