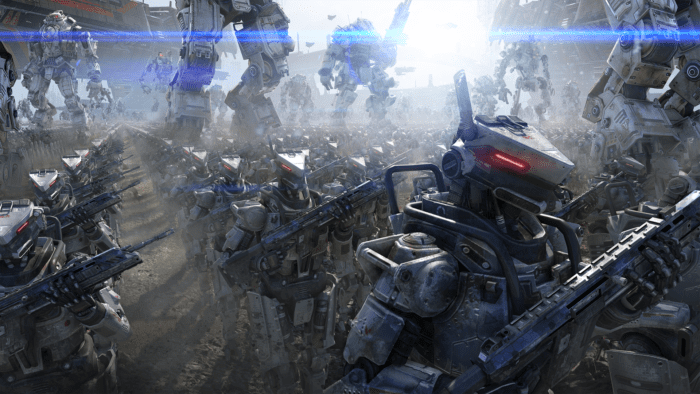 For the longest time, zombies have been the go-to enemy for developers who can’t think of anything else for you to kill. This problem got so bad that developers would put in enemies that were very clearly zombies and then call them something completely different to try and trick us for a second. The Mass Effect series threw a reanimated corpse at us and called it the Husk. But it didn’t matter that its skin was white and its eyes a deep blue. They shambled towards Sheppard, swiping blindly at him and his crew. The name was different, but we all knew what we were re-killing. But a new threat is starting to make a name for itself as the overused fodder enemy: humanoid robots.

It seems like every modern shooter these days has heaps of metal for you to pour entire clips into. I’m already feeling the fatigue. They endlessly pour onto the battlefield, droning on about conformity. Shoot off a leg and they just keep crawling towards you, desperately trying to bring you down with them. But there still isn’t any satisfaction.

Many of the games that feature mechanical menaces give similar story reasons for their presence. An overbearing government has created AI controlled sentinels to keep the peace and your character needs to fight through waves of them to take down the dictator at the top of the food chain. Or a previously friendly AI has been corrupted, turning what were supposed to be man’s subservient slaves into walking harbingers of death. They’ve made their way into Call of Duty, run amok in Titanfall, served as the main enemy for the first Mass Effect and, most recently, took over the first several hours of Gears of War 4.

Gears of War 4 introduced robotic baddies called deebees. Small carts rush into the area carrying a dozen of these bulky metal tin cans, unload them, and then leave as they unfold and start firing at anything in sight. But no matter how many of them the game threw at me, they still weren’t fun to fight. And this has nothing to do with them not gushing fountains of blood when you sink a chainsaw into them, I swear.

After the events of Gears of War 3, the COG had become obsessed with maintaining the peace. And the best way to do this was with an army of heavily armed robots. Not only do they stomp tirelessly towards you, if you damage them enough their bodies course with energy and they rush you, trying to close the distance as much as they can before exploding in your face. They aren’t fun to gun down and this wrinkle just serves to frustrate.

As soon as the game gave me some more unpredictable, hostile enemies in the form of the Swarm the game picked up a great deal. But the intro to the game had been seriously soured for me. I was excited to hop into a new Gears of War game, see what a new team could do with the IP. And what they do is add robots to a game that already has zombie-like enemies.

When it comes down to it – to me, at least – robots seem like a lazy addition by the developers. We’ve spent four games snuggling up to cover and poking out to face the scaley, subterranean monstrosities that are the Locust. We also got to gun down the likes of the Brumak – a dinosaur with chainguns and rockets mounted on its back. The Locust horde may have just sent out the same foot soldiers for almost three games straight, but there was a sense of doom whenever they peeked up from behind cover. What’s more, once the Locust do come back into the picture, the deebees pretty much fade into obscurity. It’s clear that the developers know that there are more interesting enemies to go head-to-head with and more interesting antagonists than angry governments.

We’re still at the point where robots haven’t overstayed their welcome just yet. People are starting to get bored with them. When Call of Duty Black Ops III first game us the opportunity to take on robotic forces, fans were immediately disappointed. Not only did it not fit the pre-established tone of the series, but they weren’t excited to fight enemies that looked human but just had a couple of gears sitting where a heart would be. But as they begin to reach the point of being overused and we no longer like fighting metal with metal, then what?

Players eventually tired of hacking apart zombies in every game under the sun, and the same thing is bound to happen with robots sooner or later. They’re an easy enemy to simply fit into a story in order to give proceedings a sense of scale, but there are more inventive enemies that we would much rather go up against. So please developers, give us something fun to fight. The mindless piles of wires you keep throwing at us aren’t doing the trick.