Oh…Sir! The Insult Simulator on PC

Sometimes, I come across games that I just can’t even really classify. Oh…Sir! The Insult Simulator is one such game. Falling somewhere in the realm of fighting games, this title pits players against AI or human opponents in a battle of wits. The goal is to take down your foe with sharp barbs formed by stringing together words and phrases from a list. It’s a simple mechanic, but one that works out pretty well – for the most part.

With a brief tutorial, Oh…Sir! runs players through the basics of forming the perfect insult. Beyond the simple construction of grammatically-sound quips, players can deal bonus damage by hitting the opposition’s weak point, putting together combos that pick repeatedly at the same spot, and using character-specific pieces to round out their repertoire. 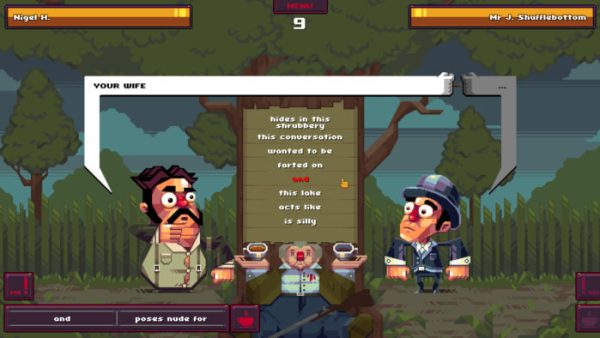 Most of the meat of Oh…Sir!’s insults come from a shared board that refreshes after each player constructs a complete insult. Each player also has a hidden “hand,” two words or phrases they can pull from that are off the board. A sip of tea, usable twice per round, will refresh or swap out the options in your hand, so players will generally have plenty of material to pull from in the crafting of their attacks.

Perhaps the weakest part of Oh…Sir! is that there are times when the insults available simply aren’t very good. While a careful selection can create a pretty solid burns, sometimes the best you’ll get is something to the effect of “Your math teacher was born in your sense of style!” Of course, the game recognizes that these paltry pickings aren’t up to snuff, and you’ll deal much less damage using the poorer constructs than if you can find something that truly works. 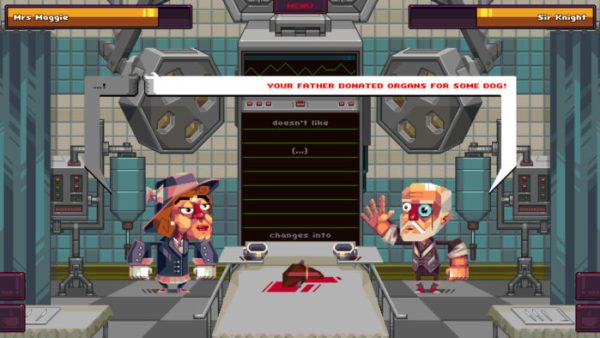 Oh…Sir!’s cast of characters is varied, but mostly plays to a variety of stereotypical British gentlefolk. These are used to form the unique “hand” phrases for each, as well as to denote their weakness. A chubbier chap, for instance, is more sensitive to insults on his weight or appearance, while a dapper gent takes umbrage at those which pick at his sense of style. Learning each character’s weakness is a key to succeeding, and is even greater when you can string up a combo that hits the nail on the head repeatedly.

In addition to the roster of proper English insulters, Oh…Sir! brings in a few special guests. Lo Wang, the crude-quipping star of the Shadow Warrior series, features here, with the source material’s Jason Liebrecht voicing. Tournaments against AI opponents end with an afterlife round against a pretty convincing Morgan Freeman impersonator in the role of “Father,” whose ‘Family Issues’ weakness is pretty entertaining when played against well. 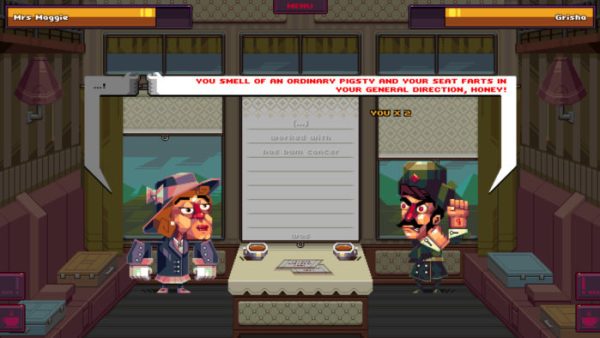 While Oh…Sir! isn’t a particularly extensive or detailed game, it’s a blast to play if only to see how ridiculous and over-the-top your insults can become. A colorful cast with full voice-acting support, a small yet varied selection of stages, and the unique humor come together to create something that’s a fun time-killer and easy to get the hang of. For all of this, the game’s $1.99 price on Steam (or 10% off through 11/1) is a solid deal, and you’ll easily get your money’s worth.