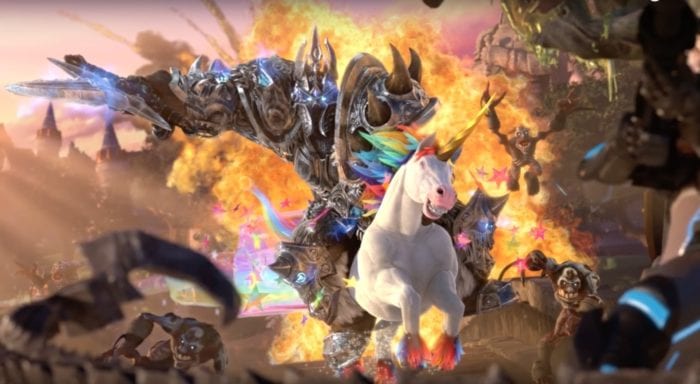 Heroes Brawl is a new game mode headed to the Heroes of the Storm, complete with new maps, modifiers, weekly rewards, and what looks to be plenty of crazy action. What Blizzard describes as “delightful madness,” Heroes Brawl hits the game the week of Oct. 17.

“Play on unique maps with surreal twists and with custom rulesets that turn everything you thought you knew about the game on its head,” the developer teases in a post on the game’s website.

There will be three types of new activities, or Heroes Brawl Battlegrounds. First, players can take to existing maps with new modifiers. Though Blizzard isn’t revealing any of them just yet, “expect these gameplay modifiers to add completely new and unexpected quirks to drastically change how you play Heroes of the Storm.”

Next, the game will see new, single-lane battlegrounds and even the addition of arenas. Each inspired by existing maps, the three arenas Blizzard has detailed include the Punisher Arena, the Garden Arena, and the Sky Temple Arena. While the Punisher and Garden arenas call for players to get kills or collect seeds to score points, with the first team to 100 winning, the Sky Temple Arena sees the two teams compete over the temples in order to control lasers and destroy the enemy core.

And if all that wasn’t enough, Blizzard is even changing up hero selection for the new mode. “For each brawl, you may either have preset heroes, you may shuffle (pick your hero from a custom lineup), or pure random.”

Then, on top of everything, the developer is offering “unique rewards and large sums of gold,” for anyone willing to dive into three brawls a week.

While the week of Oct. 17 release window is listed in the description of the trailer, it’s worth noting it is suspiciously absent from the Heroes of the Storm website itself. As we learn more about Heroes Brawls, you’ll find it all right here on Twinfinite.