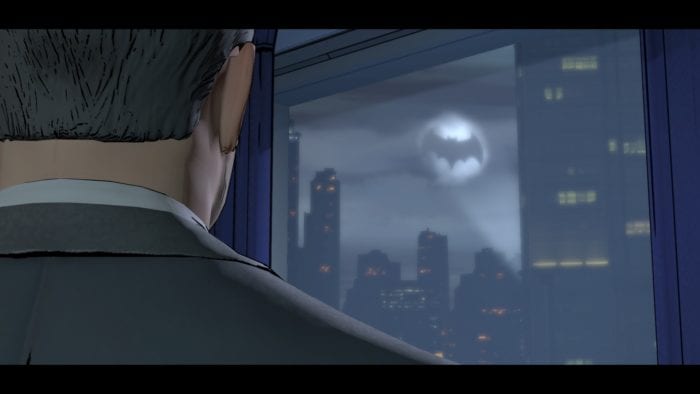 Batman and Bruce haven’t had the most enjoyable of rides so far in Telltale’s series. Episode one threw his family name under the bus and episode two only further compounded those problems with the rise of the Children of Arkham. Surely then, episode three would be the time that things would begin to go right for the millionaire playboy and his alter-ego, right?

Episode three, titled, New World Order almost played out for the most part as a response to the closing events of episode two. Having seen the rise of the Children of Arkham and his good friend Dent suffer some serious injuries, Bruce and Batman set out to uncover the truth behind this new group of criminals. Bruce’s relationship with Harvey is front and center at the very beginning, and as Harvey recovers and attempts to come to terms with his injuries, there’s a notable shift about him throughout the episode. Harvey Dent is a changed man, and it doesn’t take long for New World Order to make this evidently clear. An inner conflict storms inside him, and it’s down to you as Bruce to help him through it. This almost summarizes the overarching theme of the episode – uncertainty and shift.

As the episode proceeds, you’ll find yourself taking control of both Bats and Bruce as they follow the fresh scent of the Children of Arkham and whatever it is they’re up to. However, things have changed since we left off. The Wayne name has been disgraced and all eyes are staring rather angrily at Bruce. There’s a number of times throughout the episode where things won’t necessarily turn out as they perhaps may have done in previous episodes thanks to this new negative atmosphere surrounding the Wayne name and the Batman persona. This means you’ll have to think on your feet. You don’t automatically have the popularity to be the Batman (or Bruce) you necessarily want to be, or perform the action that you think is going to best guarantee you the information or results you want. You’ll need to think about each and every action and response you take. Even more so now than you may have done in the past. Allies are a valuable thing in Gotham, especially when you’re falling so quickly from grace.

New World Order is the first time, however, that we see some significant aftermath from the Wayne family scandals. Yes, Wayne Manor had been swept for evidence and details in episode one, but episode three brings an event that severely impacts both the stature of Bruce, and the productivity of Batman. It’s just another instance of the turmoil in the Bruce/Bats dynamic. While you’ll be reluctant to further compromise Bruce in the eye of the public and his potential supporters, you risk dealing fatal blows to your investigation as Batman if you just go along with it. Unsurprisingly, Telltale has made episode three just as difficult to read and gauge exactly what the best answer is for each situation. And you’re never safe from a curveball to screw up all your hard work a little further down the line.

For the first time in the series so far, there were a number of dialog options that I truly struggled to answer. While there’s been one or two that had me a little troubled in previous episodes, only now does it feel like every word you utter, be it as Bats or Bruce, could have some horrible consequence in the next chapter. In fact, Telltale has done such a wonderful job of creating an air of uncertainty around everything that I even began to question the slightest looks and glances from those I know I should be trusting… or, at least, I think I should.

Gameplay, for the most part, focused very much on making conversational decisions and discovering what you can about the Children of Arkham. For the most part, combat is relatively light, but its absence wasn’t missed. In fact, episode three took a much slower approach, but it’s a welcome one. We got to delve even further into these unique adaptations of the popular characters of this world. Episode three is just as much about character development and relationships as it is about uncovering the evil plans of Children of Arkham. Episode two examined the dynamic relationships between Bruce and other characters, and episode three only further taps into that. There’s definitely some excitement and major revelations in the latter half of this episode, both in the business and personal senses, but they wouldn’t have felt quite as powerful had the former half not done the groundwork.

Unfortunately, there were events and decisions that had to be made in the opening chapters that didn’t feel like they had any consequence. Picking one of two instances to help out at first didn’t appear to be quite as influential on the overall story as I first anticipated, and certain conversations that I thought would later result in fruitful payouts have yet to yield any returns. Though the pacing was necessary to make the major points of this episode shine, these earlier moments lacked all fell a little short by the end.

During the two-hour episode, the game played and looked as expected. While we have yet to run into any of the technical issues that other players have faced on the PC platform, nothing seems to have changed here. Things were still running smooth and the game kept up during those moments of action.

New World order was an enlightening episode with one hell of a latter half. The highs were huge and while a few of the quieter moments lacked quite the impact players may expect, were certainly providing a platform for the finale to spring from. As the credits rolled and we officially cross the halfway mark in the series, Telltale’s Batman looks set to be full of plenty more twists and turns. Episode three messes with your emotions and thought trails and has you seeking comfort and support in any place and character you can possibly think of. Unfortunately, Bruce and Bats’ options are beginning to look a little scarce.