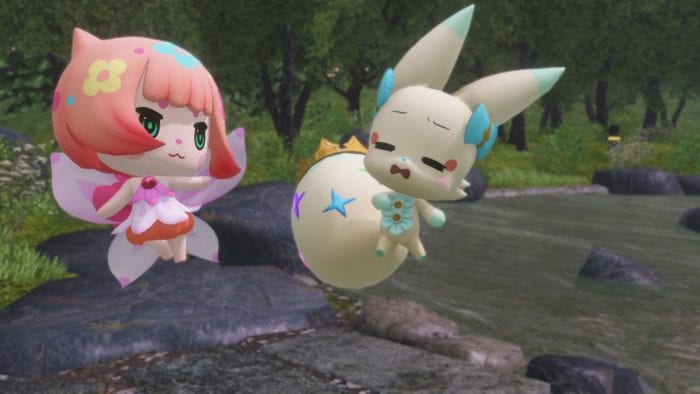 Ed is at Tokyo Game Show 2016 by himself. He does not speak Japanese. Sometimes he’ll be able to figure stuff out to write you a proper preview. Other times, he won’t have any idea what is going on. This is one of those times. This is his attempt to put into words what he experienced. Full disclaimer: He could be very, very wrong about anything and everything here. Enjoy at your own risk.

OK, so in my 10-15 minutes with World of Final Fantasy I didn’t learn much – if I’m being honest – other than it’s the true current-gen successor to Team Fortress 2’s hat-based gameplay, but more on that later.

The demo kicked off with a cutscene that I did not understand a single word of. I met Reynn and Lann, the game’s main characters. They are bored of their normal life I think, and see some big portal which leads them to what I can only assume is THE World of Final Fantasy. They jump in because why not.

On the other side of the portal is a very pretty, grassy, mountainous area. I was actually surprised with how nice looking everything in World of Final Fantasy is, because when I hear a game is using chibi visuals, I automatically interpret that as code for this game will have downgraded graphics. This is not the case in World of Final Fantasy. It’s no hyper-realistic Final Fantasy XV, but it definitely takes advantage of current generation power.

Just chilling in this area are some of the heroes of the major Final Fantasy games, such as the Warrior of Light and Lightning. They said something to me, and then gave me an item that I didn’t know how to use. Eventually they play a part in gameplay, otherwise what is this game even supposed to be, but I didn’t get a taste of that in the demo.

There’s a short tutorial explaining everything in the game that I couldn’t read BUT one thing I did figure out is that you can switch back and forth from your chibi and non-chibi form both while exploring and in battle. I have no idea what this does. I think what happens is that the controllable characters each have a monster companion that they wear on their head, and when they are in chibi form (aka small and cute) instead of being on their head, they can attack themselves too. I didn’t really notice a difference in damage though, so I really can’t tell you what the point of this is, but I’m intrigued that being chibi or not chibi is actually a gameplay element and not just a visual design choice.

Right, so monster hats are officially known as Mirages (but they’re totally hats). An important thing to know about this game is that anyone who is anyone in World of Final Fantasy wears some kind of hat, preferably an actual monster. Our protagonists pick up on that right away luckily and don’t embarrass themselves in front of the locals. Even monsters get in on the action. I got into a random battle with a dapper Tonberry that was sporting the latest in Mandragora headwear. Again, I really don’t fully understand what the point of this is, but it does something, I can assure you of that.

There’s also some kind of Pokemon-like mechanic for obtaining new hats and evolving them into better hats. After a battle with a cute little Chocobo chick, I was able to capture it rather than outright defeat it and recruit it as a new wearable hat (I think anyway, I couldn’t figure out how to switch it, but it looked like it was there as an option). I also noticed something that looked like an evolutionary path where the little choco-chick with the egg-shell on his head could become a Chocobo sans egg shell on head, which I assume is a higher ranking Chocobo hat.

Aside from the chibi form switching and hats, battle in World of Final Fantasy uses the traditional ATB system which should be familiar to anyone that has played a Final Fantasy game within the last two decades.

I respect World of Final Fantasy for properly taking Team Fortress 2’s gotta wear em’ all hat mechanic, and expanding it for the current generation. Not only will hats play an actual role in combat somehow, but they may even be able to evolve into bigger and better hats. I’m very excited for just how far Square Enix decides to take this fresh new mechanic and you should be too.