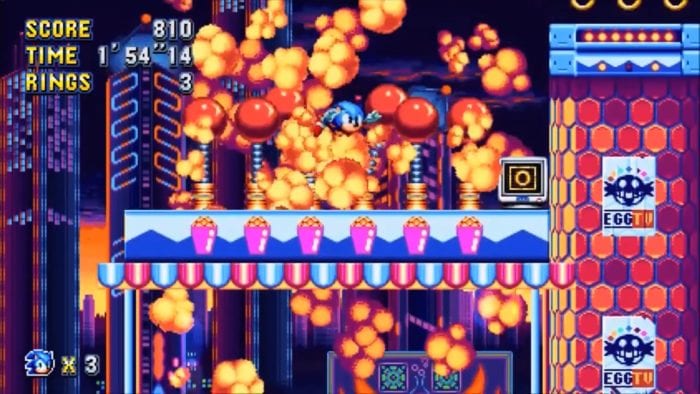 In order to remedy this downward trend, Sega announced back in July it would return Sonic to his roots with next year’s Sonic Mania. It was also confirmed that the game would feature remixed levels from the 90’s trilogy of games (as well as Sonic and Knuckles and Sonic CD), which will feature new bosses, levels and moves. It seemed that Sega had a formula for a game that would be great fan service for those who were there from the start, with some fresh content to keep things interesting. Heading down to this year’s EGX, I managed to get some hands-on time with the game. Checking out the screens while in the queue, it was clear that my time with the Sonic Mania would be short. Players had a choice between a remixed version of the classic Green Hill Zone from Sonic 1, or a brand new level entitled Studiopolis. I opted for the latter.

Playing through the neon-soaked Studiopolis Zone would bring back a lot of fond memories, but also a sense of excitement of what was to come when the game eventually releases. If you’ve played a classic Sonic game before, you’ll feel immediately at home with how it handles. Simplistic controls are once again the order of the day, with the A button (or X on PS4) to jump and tapping it with the down direction to pull off the spin dash. It has stripped away a lot of the jargon that has plagued later Sonic entries and brought it back to the core principles of where it all started, mainly collecting rings at high speeds from left to right. It felt like playing one of the games of old, so much so I felt the urge to switch to the D-Pad from the stick on the Xbox controller just for the nostalgic feels.

The overall play time was only a few minutes, as it was with the original games. It was your typical first act of a Sonic level in terms of difficulty, though it required more than going in the right direction for a short period of time to complete the level. It felt like Sonic 2’s Chemical Plant Zone, with intertwining ramps than benefited from rolling over running, and the classic spin dash was often required to progress. Enemies were of a similar variety, mainly consisting of pesky spikes and mechanized insects to knock you off rotating platforms and spill your rings at your earliest inconvenience. (My one regret was not collecting enough rings to unlock the bonus stage.) The graphics were of a familiar old school and overly colorful state, and the funky, upbeat soundtrack was there as to be expected, with the level leaning towards the visual stylings of Sonic CD.

What was most impressive was the attention to detail, particularly if you also grew up playing Sega consoles. The level featured not just the same sense of gameplay that was offered up all those years ago, but the odd Easter Egg here and there. These features helped give the experience a vintage feel. (For example, a neon sign flashing the words “Pink Bot” was a clear reference to the Pine Pot sign above the café in the background of the first boss fight in the legendary beat-em-up game Streets of Rage.) Daytona USA fans will also recognize a “High Class Hornet” van as you speed your way towards the end of the level, referencing the trademark Hornet car found in the game.  There were a few other neat features, with TV screens of a retro-style Eggman dancing with a cane, and having to fly up through a popcorn machine to complete the level. Fans who remember the mecha-crab infested Spring Yard Zone from Sonic 1 will also notice the words “Cope” and “CPU” in the background and some junctures.

Overall, it was a positive (albeit short) preview of what’s to come in Spring 2017. There was quite a lot to process in the few minutes I managed to spend playing Sonic Mania, but what I did take away from it was that the series could see a return to form in the near future.

Minecraft Dungeons Is Refreshingly Lightweight for a Looter Game