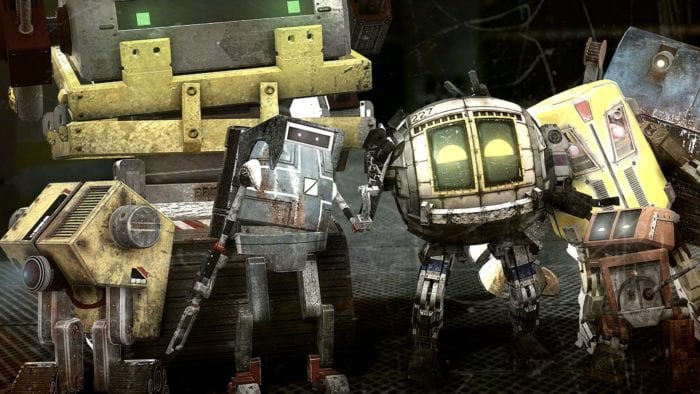 Shiny is a violence-free 2.5D platformer that tells the tale of a robot named Kramer 227, who finds himself stranded on a doomed planet the human race hastily abandoned. This planet, named Aurora, is on course to crash into its sun, encouraging Kramer 227 to find the remaining robots that are still about inside the planet’s facilities and rescue them before they’re all reduced to mere stardust. While there is plenty of classic influence to be found here, this odd adventure lacks the proper polish, dragging its experience down to one that is frustrating and largely tiring despite some clever and competent ideas.

There is a fairly emotional story here that is charmingly brought to life thanks to Shiny’s phenomenal soundtrack. Knowing this planet and all the robots on it are heading towards certain death brings a sense of desperation with it, which the soundtrack illustrates in a very powerful way. Whether you’re navigating hollow caves or making your way through what remains of an abandoned factory, you constantly feel what the sentient Kramer 227 must be feeling, ranging from sheer panic to brief moments of awe and wonder. This lends the character and the general game a sense of heart-wrenching hopelessness despite there never being a spoken word reflecting concrete emotion. 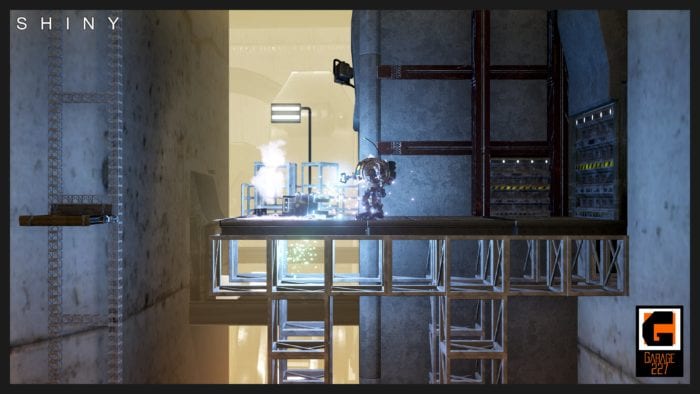 While its soundtrack is absolutely on point, in terms of graphical fidelity this game is sadly far less impressive. Shiny plays with a couple of visual styles, mostly reminiscent of The Swapper’s more gritty, realistic appearance. However, textures look dreadful even on the highest settings and the general level layouts feel as if they were made with a simple and repetitive level creation tool. For a game that brings so much potential emotion to the table, seeing its bland overall design will undoubtedly take some of that charm away from your experience. I expected lots of personality from Shiny after its heartfelt opening sequence, yet once you are let loose on the more difficult levels, it’s hard to keep your hopes up when everything more or less looks monotonously identical.

In terms of its gameplay, Shiny relies on a rather simple premise with some unique and captivating ideas spread throughout. You will mostly jump your way through levels, timing everything just right whilst attempting to revive all the deactivated robots scattered throughout, as well as collecting little battery coils along the way. This is pretty straightforward most of the time, yet its clever battery draining mechanic adds some much-needed tension to the overall gameplay.

Every time you activate a checkpoint, your battery gets recharged. Walking around, taking damage, restoring other robots, and jumping about are the most prominent actions that will drain your battery, and if your battery dies for any reason, you will respawn at the latest checkpoint. You can also choose to travel back to a specific checkpoint in order to recharge your battery manually, but each time a checkpoint is used, it loses one of its charges.

Each checkpoint contains between four to eight charges, sometimes going a bit above or below that number, and these available charges largely depend on how difficult a certain part of a level is. Tougher sections may provide you with eight charges whereas a relatively straightforward part that requires little more than some jumping will only provide you with four. Running out of charges may require you to restart at an earlier checkpoint, or in the worst possible case it will wave you goodbye with a game over screen that’ll have you replaying the entire level. This mechanic kept me on edge and constantly thinking ahead, planning out my every move to ensure the best possible route when Kramer 227 was practically running on fumes. 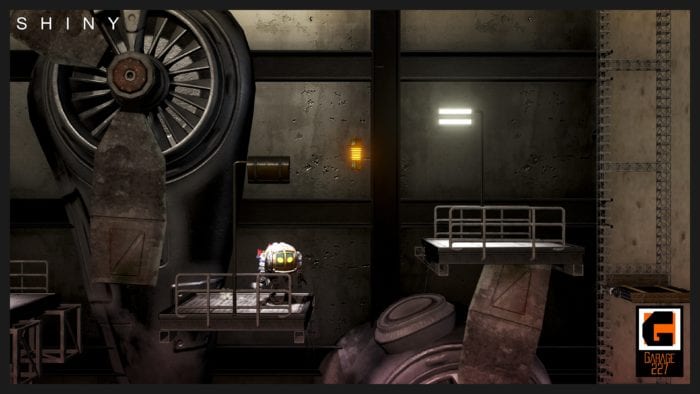 Sadly, Shiny largely relies on extremely fine timing and precision, which is something its clunky controls don’t really lend themselves to. It feels as if you are pulling Kramer 227 along with an elastic string, resulting in a very small yet noticeable delay regarding player movement when using a controller. When accurate movement is such a big part of its core gameplay element, one would expect Shiny to feature snappy and responsive controls, but that simply isn’t the case. Adding some weight to a character is a logical decision to make, but when that interferes with the player’s experience, it needs to be adjusted. The aforementioned battery mechanic is incredibly reliant on careful planning and not mindlessly jumping around the place, but when you’re feverishly bouncing up and down in an attempt to balance and coordinate yourself because the controls frequently refuse to cooperate, the line between difficulty and unfairness blurs.

I feel as though movement is an issue that can be easily fixed with future updates, but seeing how Shiny lacks general polish, I remain doubtful whether those changes will be made. Everything about the game feels like its one or two points below being genuinely good, ranging from its visuals to its controls. Though an exception has to be made for its atmospheric soundtrack. The overall premise is there and it sounds truly magnificent on paper, but once you see it all in practice, it just doesn’t seem to click as well as it could have. Calling Shiny a terrible game isn’t quite the truth, but with so much about it feeling off, it’s hard to give it dire praise.

In the end, I can’t help but feel as if Shiny could have been so much better than it ended up being. While its soundtrack does a very solid job of engrossing you in its established world, the aesthetically unpleasing presentation takes away from this emotional adventure. Some sluggish controls can usually be forgiven as well, but when a game relies this much on perfect planning and careful thinking, the gameplay has to be impeccable for it to work accordingly. Even its more innovative and intense battery mechanic suffers from the general lack of polish that plagues Shiny, especially regarding how unresponsive the controls feel. It pains me to say that just like its main protagonist, there is something sweet and lovable lurking underneath a heap of rusty metal.