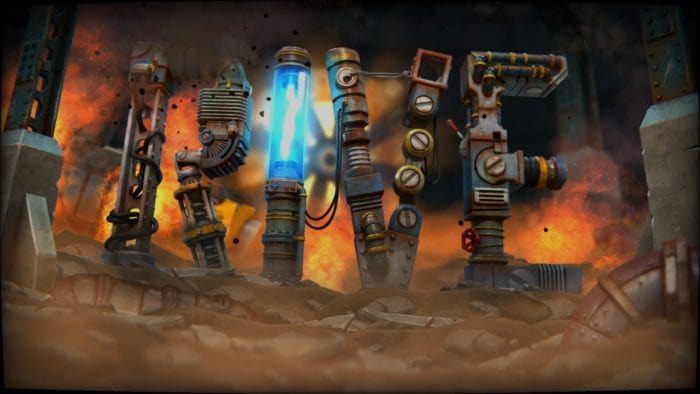 It has been said that games have become easier over the years, with checkpoints and hint systems making the joy of overcoming a particularly difficult challenge a rare thing. RIVE, Two Tribes’ 360 degree shooter/platformer, hearkens back to the days of challenging combat and tough platforming, but oversteps the line between fair and annoying too often.

RIVE puts you in the shoes of of Roughshot, a space scavenger, who gets trapped onboard a mysterious starship. Forming an unexpected alliance, he must fight his way out from inside his tank. The starship setting is wonderfully designed – the dark, smoky atmosphere lit beautifully by raging fires. The aesthetic is almost comic book-like in the hectic foreground, but is reminiscent of decades old platformers in the background. As the action ramps up, the screen is filled with plumes of lava and flying bullets and RIVE looks fantastic. If only you ever had more than a nano-second to admire it.

RIVE is difficult and not always in a fair way. There is only one mode when you start the game up, hard mode, which makes the developer’s intention clear immediately. Admittedly, I’m not a world-beater when it comes to fast-paced platformers, but beating moments of the game is often met with a feeling of relief rather than accomplishment. Combat sections often require you to keep track of the movements of three or more types of enemy, while avoiding environmental dangers, and some platforming sections require an insane level of precision. Tactics inevitably resort to repetition or trial and error, leading to death after death until somehow you prevail. RIVE makes it abundantly clear what is required, but doesn’t always give you the requisite tools to do it.

That isn’t helped by the fact that the ‘upgrades’ you can purchase do not make much difference to your strength. The weapon you are given at the start, a machine gun, is the same one you’ll finish the game with. Also, you spend your loot on armor that is useless against the insta-death obstacles, or on special weapons for which one-time-use ammo is dropped by enemies at random times. Not every moment is frustrating, however, as some sections, while challenging, are paced well enough to give you a chance to pass and enjoy the well-designed levels. I have a feeling, though, that many players will give up before getting to the fun moments. The fact that my score on mission three is 80th in the global leaderboard, yet only in the top 16 percent, suggests that many people gave up quite early on. Of course, if you are looking for a challenge, RIVE may be just for you. Just be aware that it demands perfection from almost every jump and decision.

What RIVE does well is in its design of levels and enemies. The frequently seen cluster-bots are quick, unpredictable and deadly; the bats are hard to see and persistent, yet easy to defeat, and the turrets are strong and act as a distraction from the platforming. When faced by each type individually, overcoming them tactically is fun but when faced by more than one, you can’t help but be overwhelmed. Hacking is also a huge part of the slower sections of RIVE. You will hack sentry bots, nurse drones, and smash bots, all of which help you in combat. RIVE is at its best when the hacking is integrated into the platforming. Having to leap between anti-gravity areas, reacting quickly to hack terminals in mid-air makes for suitably challenging and enjoyable platforming. The sound design in these sections is also excellent. The music matches the pace of the gameplay and every action has a particular sound and vibrates the controller. Aside from the cheesy, meme referencing humor that attempts to counteract your frustration, the slower parts of RIVE are very good.

Difficulty is a good thing when managed correctly. Most players want to beat an area and be overcome by a feeling of pride and accomplishment, not be glad it is over. RIVE often prompts the latter emotion and while the levels, art, and hacking are fun and well-designed, the main take away from Two Tribes’ game is a feeling of frustration.