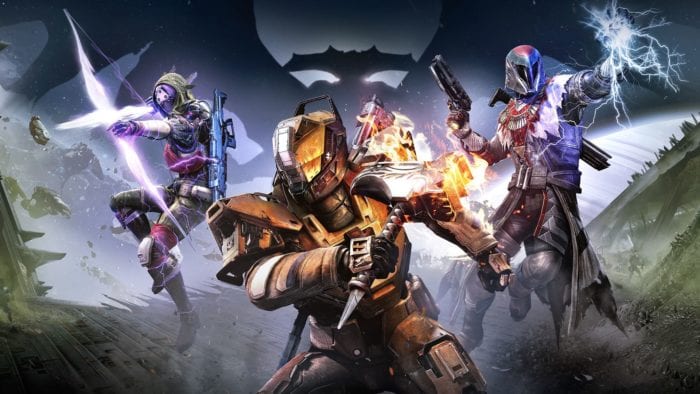 Destiny is a game about evolution, in more ways than one. It’s not just about you evolving into the ultimate space warrior fighting constantly evolving enemies of the Darkness. Bungie has been evolving the game from its original, fractured state into a complete and near perfect product for the last two years. The gameplay mechanics have basically stayed the same as they were since the original release, give or take some new materials for you to use, but the biggest change of all came to the story.

Leading up to the initial release, Bungie sold players on the idea of becoming a badass space warrior basically on par with a Jedi. Every commercial and trailer ended with the promising tagline “Become Legend,” and that their adventures would be tales that fathers would tell to their children late at night. And yet, when the game came out, it turned out that players wouldn’t be feeling that way. In fact, the story was simultaneously impossible to shake off, yet barely there. The veteran voice actors that were hired to help with the base story couldn’t save the frankly subpar writing–I could tell you about the overly flowery dialogue, and I could tell you about how I don’t have time to explain why I don’t have time to explain. What should’ve been a major feather in the game’s cap with netting Peter Dinklage as your trusty Ghost ended up being one of the most divisive parts of the game. The pieces of lore that weren’t given to you during mission briefings were instead relegated to Grimoire Cards that required you to stop playing and read about it all on the game’s website. A game where you can’t really pause this may be, but there had to have been a better way to address that, for sure.

Story may not be the most important part of every game, but when that’s a big part of your marketing campaign, it’ll be heavily scrutinized, and that’s what happened with Destiny. Even to this day, no matter the stance people take on the base game, it’s a common agreement that the story was incredibly lacking. The biggest shock about all this was just how weird it felt for Bungie of all people to skimp out on the story. Say what you will about the Halo franchise, the story for each game at least felt like the writers were on the same page with the rest of the development team. Not so with Destiny, which already had evidence of stuff being cut from the product.

Never let it be said that Bungie doesn’t listen to their community. They clearly knew that they didn’t release Destiny at the best it could be and set about fixing it with updates and DLC. Dark Below didn’t do much on the storytelling front, and neither did House of Wolves–though credit to Wolves for telling an outlaw story. It was last year’s Taken King that signaled an evolution for the game’s storytelling, most importantly by giving the player something that was sorely lacking from the base game – a proper villain in the form of Oryx. The rotating horde of enemy factions from the first game couldn’t hold a candle to a giant, three-eyed bat god who kicks off the plot by making a giant hole in the ring of Saturn.

What also helps is how this expansion connects story and gameplay better than the base game. Oryx’s presence is felt all throughout Taken King and Destiny as a whole, from the moment you select the game on your system and see his glowing eyes to roaming a planet and having a small group of Taken pop up in the area. Even when you’re not doing the story missions, you feel like you’re growing in power for when you eventually have to go up against the titular big bad. The new subclasses don’t hurt either, to their credit. When you start the mission to acquire new powers, the music swells and the narration sets the stage; there’s history in the Vanguards talking about the power behind your new abilities. Flowery dialogue it may be, but damn if it doesn’t fit.

Taken King provided a complete beginning, middle, and end (much better than the base game), and for many, that was assumed to be the end of Destiny’s first story. Surprisingly, that turned out not to be the case, as last week’s Rise of Iron has shown us. The new (and presumably final for reals) expansion deals with Guardians helping Lord Saladin put an end to the SIVA virus his fellow Iron Lords died locking away years prior. It’s a more straightforward story than Taken, to be sure, but there’s a sense that you’re a part of something bigger as you walk up the mountain reclaim Felwinter Peak from the Fallen. Wielding Saldin’s flaming axe has weight behind it, almost as much as zapping baddies like your Emperor Palpatine or shooting energy arrows.

If House of Wolves was an outlaw story and Taken King was a revenge story, Rise of Iron is a legacy story. It’s a smart move on Bungie’s part, getting players to become more invested in the lore by showing the history behind the guns they use in battle, and certainly a preferable approach to than Grimoire Cards. For some players it won’t matter, but others may decide to play through the story missions of the expansion with the guns named after those Lords, just for the symbolic experience.

Vanilla Destiny was sparse on cutscenes, and so was Taken, but that’s not the case with Rise; it’s the most cutscene heavy expansion of them all. It’s easy to see why, since Bungie wants you to feel like you’re stepping into the shoes of literal legends in this new expansion. Saladin’s Iron Banner has turned out to be training of sorts for when the SIVA virus would come back. While you can go into the expansion relatively blind and still feel like a student walking through a history museum, you’ll definitely get the most out of it if you’ve been participating in the Banner and have gotten the guns named after the dead Iron Lords. Even completing the campaign in its entirety, raid included, gives you a sense of accomplishment and makes you feel like an Iron Lord.

There’s still a good amount of mystery surrounding the upcoming Destiny 2. All we know about it is the recent reports of it coming to PC and possibly jettisoning everything from the first game to become something completely new. It’ll definitely be a shame if our Guardian doesn’t stick around for the next big story, but if this also provides an even better story for the base game–and going off this possible art of the Last City in flames, that may be the case–that’ll at least be some consolation.