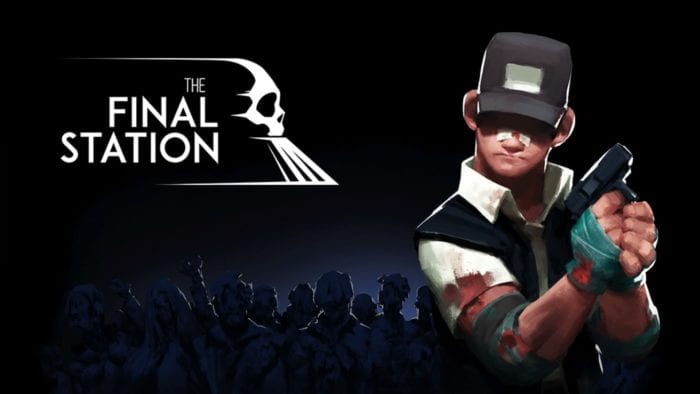 THE FINAL STATION ON PLAYSTATION 4

At first glance, Do My Best Games’ The Final Station looks like just another pixel art sidescroller with a shooting mechanic and its story of survival in a post-apocalyptic world. Certainly familiar, but there is much more to it than meets the eye.

Taking on the role of a train conductor, you are instructed by military officials to transport important goods, using the last remaining train, to a specific and far away location. As you travel, stopping off to collect supplies and save survivors on the way, you must ensure the train keeps moving and the passengers are healthy.

However, The Final Station is not a kind of ‘Train Simulator: Apocalypse Edition’, as you spend the majority of your time away from your transport, searching outposts for a four digit code that allows you to move on and killing the white-eyed zombies that have taken over. Here is where the survival horror elements of the game become prominent. The contents of each room are only revealed when you enter, and as the door menacingly creaks open, you hope it is either someone to save or a room full of supplies rather than a horde of zombies for you to take out with one of your weapons, which are controlled awkwardly by the right stick. The control scheme can feel unintuitive at times on console, with buttons being mapped strangely, but learning the layout does not take long.

The tension comes from having to manage your depleting inventory and ensuring you have enough bullets and med-kits to make it through the next room. Running out of ammo leaves you with no choice but to run as fast as you can or trust that your fists will see you through. Neither of these options are particularly viable, and death is almost an inevitability, especially during the early levels. However, the layout of the rooms never change and death allows you to learn the contents of each room and plan your assault accordingly. Some enemies are easy to take out by hand, whilst armored ones need a swift bullet to the head. A tactical retreat, familiar to anyone who’s played a game like Bloodborne, is often a good option.  Planning your movements well allows you to take out the infestation, collect useful supplies, and pick up survivors without much of a problem.

Once you’ve found the code, you head back to your train and travel to the next area. In these short sections, the gameplay changes completely. Overlooked by a beautiful backdrop of the post-apocalyptic world, you have to manage your time perfectly, moving between the train’s four systems and the passengers. The four systems that keep the train moving are simple mini-games that require nothing more than the press of a button. However, the solutions are never explained, and you’re left to work them out for yourself. You’re left scrambling for an answer whilst the train slows to a halt and your passengers begin to fade away. Working them out allows you to focus on your other tasks: crafting supplies, messaging other characters, and healing your passengers.

Keeping your passengers alive is important. Not only do you receive rewards once you reach the next zombie-free outpost, but they provide some interesting exposition on how the world became what it is now. Each one has a ‘health’ and ‘hunger’ meter that slowly depletes as the train moves. To heal them, all you need to do is give them food or a med-kit that you find on your adventures. There will certainly be a casualty or two before you master the multitasking on board the train but it quickly becomes easy to keep on top of, if not a little repetitive. Luckily, at around 5 hours long, The Final Station isn’t around long enough to feel like a chore.

The tales of survival and hope in a decaying world is what makes the on-train segments of The Final Station worth while. It is the focus on post-apocalyptic survival, rather than the zombies that come with it, that make it stand out. Whilst it is never clear what caused the outbreak, the suspicious nature of the government presence and the plots to overcome adversity are intriguing. The story itself is drip fed to you via notes that are left around the world that explain what it has been like to live after an outbreak on this scale. They also prompt you to question what role the military and government powers have and what they are plotting. I only wish the notes weren’t as small and hard to read as they are, even if that is partly due to the pixel-art style. Although the on-foot sections are predominantly grey in color, each one says something about the world. Whether it be a metro station, or a deserted laboratory, Do My Best have created an extremely interesting world. The disappointing part of the story is the ending, which leaves you guessing about the outbreak and how it is being resolved. Leaving unanswered questions is fine but doing so in such an underwhelming way leaves you disappointed during the final moments.

The Final Station’s pairing of on-foot side-scrolling survival with time and resource management on board a train makes for an consistently fun, if not short experience. The tense moments that leave you questioning whether or not to open the next door and the intriguing story of hope in a post-apocalyptic world keep you engrossed right up until the underwhelming ending. The Final Station is an unexpectedly great experience that offers much more than meets the eye with its mix of survival and platforming mechanics and is certainly a ride worth taking.

The Witcher Series Has Sold Over 50 Million Units