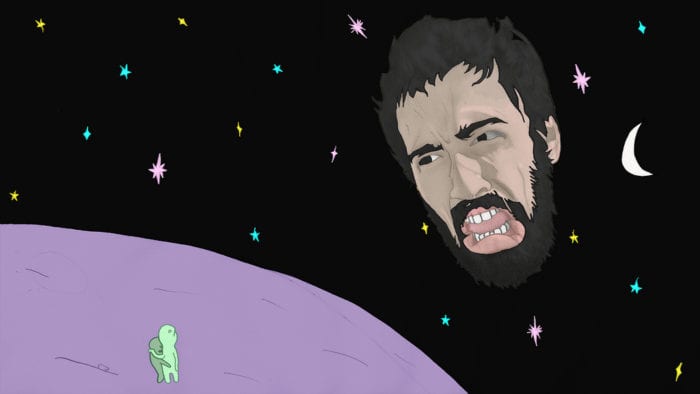 One Way Trip on PS4

One Way Trip is like being trapped in a conversation with someone riding high on whatever drug they could get their hands on. You might know the kind; spouting an endless fountain of useless observations, half-developed theories, and deep life advice that they think is much more enlightening than everyone else in the room. One Way Trip is that person in the form of a visual novel, and a really bad one at that.

That last part is extremely important to know; One Way Trip is a visual novel. Its trailers might seem to depict a conversation-heavy adventure with a game somewhere in there, but we’re here to tell you that’s not at all the case. This is an experience that involves pressing a button to advance text, and periodically choosing what to say (usually with inconsequential results). This isn’t a game, and that’s okay. However, what’s not okay is that it’s not a fun, engaging, or entertaining trip 99% of the time.

One Way Trip is the story of two brothers, Gordon and Barry, the former of which acts as the player’s surrogate for conversation choices. One day, as the two are lounging around their college dorm, the president announces via TV that the entire country’s water supply has been poisoned, and all of those who drank it that day have only six hours to live. Barry and Gordon, being two dumb college dudes who most definitely drank water that day, are thrust into an adventure involving rebel forces, evil plants, killer cyborg animals, and a giant murderous bunny – all in the hopes of finding a cure to the poison in time.

That’s one mess of a setup that doesn’t even scratch the surface of what all happens in the game’s six episodes (divided into “hours”). But, as a visual novel, the story is really all there is to it, so it’s best to leave it at that.

There’s not much we liked about One Way Trip, so we’re gonna get the main positive out there first. Barry, your brother in the story, is an absolute delight. He’s charismatic, optimistic, genuinely funny at times, and is the only character that the developers ever give enough personality to make him feel real.

Every character is portrayed as nothing but a statue with a text box. You’d think that an ensemble featuring names like Persimmon Murder Murder, Wishberry Knifeprincess, Laser Slice, and Boobs Cowboy would be fun to talk to, but alas, that is not the case. With no voice acting or even real animation at all, the writing really has to pick up the slack and make characters feel genuine. Though, instead of this, One Way Trip uses its characters as a delivery device for the only style of writing that the story ever offers; over-analytical, existential drudgery that is heavily reminiscent of Adult Swim.

Plenty of pieces of media have used this unorthodox style of writing to great effect, but One Way Trip abuses the style by not exercising any restraint, doubling back on similar conversations several times, and completely throwing any meaningful pacing out the window.

It’s very common to abruptly transition from one scene to another with zero warning, and with zero sense being made as to why you’re now here. Especially as the story aches on, the horrid pacing goes from annoying to infuriating. As the climax of the story ensues, and you (for once) actually wanna know what happens, suddenly you’re somewhere else, having a completely different conversation; maybe about time travel, maybe about the value of life. It feels like the story was scrambled together, and scenes that could have gleefully been cut were instead shoved in-between important parts of the story.

The whole conceit of the story is that the poison Gordon is being affected by causes hallucinations, or drug-like “trips.” You can tell that this bit of context is supposed to explain why things happen so sporadically, and why the screen will sometimes cut to a piece of random artwork that has nothing to do with anything, but it’s a horrible excuse for what is clearly a poorly portrayed story.

Even if you strip away the nonsensical pacing, garden variety stoner dialogue, and the badly-handled character exposition, the mainline story itself is not worth the time investment. We get the sense that there are multiple ways it can all go down, but if our ending is any indication, it’ll probably feel as meaningful as the rest of the experience (which is to say, not very).

One Way Trip was an extremely hard story to find any fun in. Its biggest asset, the strikingly accurately-written “California bro” dialogue, is offensively overused to the point of exhaustion. These mind-numbing conversations actively interrupt actual mainline story moments, and make the player want nothing more than to accelerate through the text until any semblance of a story is back on track. One Way Trip is a story that abuses its players by trapping you in a conversation with “that guy who’s always high,” and no amount of sweet sweet Barry can save it from itself.