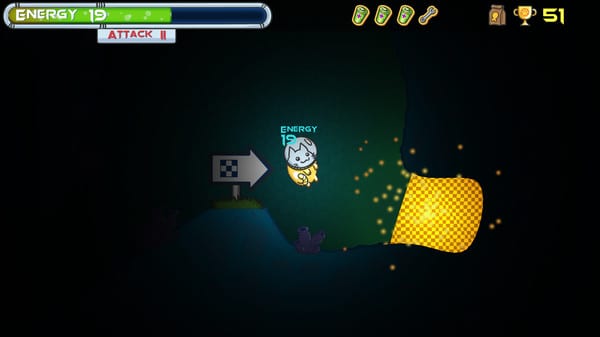 I always find that games taking a minimal approach is a bit of a gamble, walking a fine line between simplicity and simple lack of content. Miaou Moon, a physics-heavy puzzler following the misadventures of a spacefaring cat, seems to straddle this line. At times, it’s an approachable and cute game with bright animations and colors. The simplified controls, though, often lead to challenging moments when trying to accomplish even the most basic tasks.

Miaou Moon puts players in control of Captain Miaou, a spacesuit-clad feline who’s trying to get home with his cargo of high-energy food. Of course, a meteorite-related incident leaves our intrepid explorer without a ship, and floating haphazardly through the dangers of deep space. Thorny plants, spike-skinned puffer fish, and more await our hero on his quest, and players will have to use a very limited control scheme to guide our feline friend to victory.

With due recognizance that space is not exactly a cat’s natural habitat, Miaou Moon forces players to rely on a simple mechanic for navigating the stars. By releasing gas from his suit, Captain Miaou can propel himself either left or right. Movement relies on the use of energy, which is replenished by collecting the cat food scattered throughout each level. Of course, colliding with enemies and obstacles will also use up your precious energy, so moderation is key.

In addition to movement, Miaou Moon offers only one other control to be concerned about. Captain Miaou’s claws provide the means for attacking foes or clearing out certain things that block your path. Since his attacks are stronger if you’ve got more energy stored in the suit, there’s yet another reason to try and keep levels at their peak. It’s important to be careful, however, as too much food will cause the suit to burst, ending your expedition in a messy way. 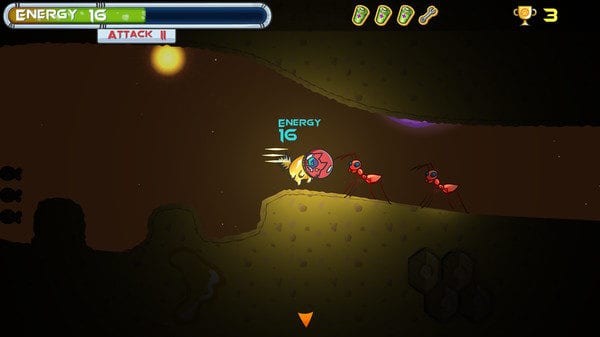 Miaou Moon’s bright, cartoonish look and upbeat soundtrack may give the appearance of an easy, casual sort of play, but don’t be fooled. The energy system, as well as the loose feeling of any real control, keep the game challenging from the very onset. From an artistic slant, it could be said that Miaou Moon’s true genius is as a tale of the illusion of control, as players are likely to spend a considerable amount of time fighting against the game’s sometimes-frustrating physics.

Despite the wide gap between the title’s appearances and the actual difficulty, Miaou Moon is still largely enjoyable. Moments of frustration are the punctuation within a story of exploration and survival, and its carefree aesthetic keeps things light. Where many puzzle games rely on speed and precision, Miaou Moon is one where the player’s lack of these things is integral to making the whole affair come together.

All in all, Miaou Moon is a unique and challenging game that has a surprisingly complex approach. Much of the play can feel haphazard, yet you’re still able to interact and guide the chaos towards an eventual goal. Hidden items, secret exits, and plenty more await those who take the time to really dive into this deep-space adventure. Miaou Moon is available now on Steam for $9.99.