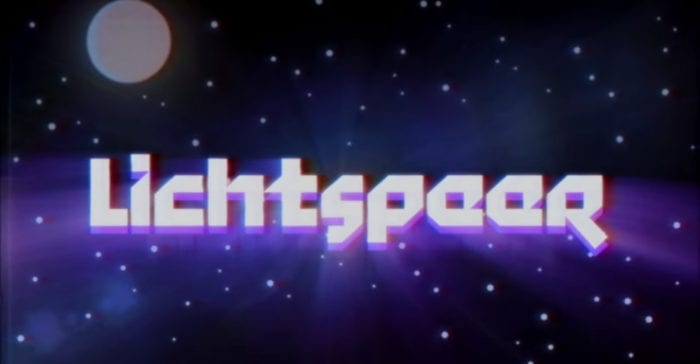 I’ve often said that I enjoy games with a simple interface. Lichtspeer, an action-packed adventure game, keeps things very straightforward. Players will use the spear given to their champion by a being called the Lichtgod to slay countless waves of enemies and create a legend worthy of the Lichtgod’s approval. An easy-to-use mouse and keyboard control scheme keeps things simple enough to get into, but don’t be fooled into thinking that means the task ahead is an easy one.

Lichtspeer is a furiously fast game, with enemies coming at you at various speeds and from all angles on the screen. Throwing your spear is as simple as holding the mouse button, aiming your arc, and releasing. Special powers can be unlocked and equipped to the A, S, and D keys for special attacks and defensive measures, which can be purchased and upgraded using the game’s currency, Licht Standard Denomination, or LSD.

On top of its incredibly fast-paced play, Lichtspeer features a stylish and colorful aesthetic that keeps pace with the game’s action. Players will have to be constantly readying the next spear, throwing faster and faster as the threats pile up. While most enemies simply march toward the player in a line, others follow vertical patterns along the way, and some may even simply take up firing positions at different points on each of the game’s levels.

Of course, the Lichtgod isn’t content just to watch you slay hordes of your foes. Lichtspeer boasts a three-challenge system for each level, with each challenge requiring something different. As an example, you may be tasked simply with achieving a streak of deadly headshots, striking an incoming harpoon out of the air, or defeating your foes in a certain way to appease your insane deity’s wishes. While these aren’t required to progress, they add some variety to play as you go.

Lichtspeer offers two game modes for players. Aside from normal mode, those who really want to challenge their reflexes can tackle the ramped-up Ragequit Mode, which takes the already frantic pace and turns it up to eleven. Don’t be fooled, though; the game will give you plenty of ragequit-worthy moments in normal mode, as well, particularly if you’re set on taking on the challenges within each level.

The simple control scheme and flashy look of Lichtspeer create an insane yet enjoyable combination. With such a basic approach to gameplay, the game pushes the challenge by adding in more difficult enemies and, of course, simply increasing their number. A thumping electronic soundtrack and pervasive humor keep things moving as you go, and there are plentiful levels to take on, including a good number of fights against huge, potent bosses.

If you’re looking for something that’s easy to pick up but will present a challenging experience, Lichtspeer may just be what you need. The game’s light tones and brutal gameplay mesh together surprisingly well, and though you’re likely to watch your hero die dozens of times during any given attempt, there aren’t many times where you feel truly cheated out of a chance to succeed. This balance is difficult, but important to creating something that’s tough but still enjoyable.

Describing its world as an “ancient German future,” Lichtspeer is filled with amusing overtones, and the enemies themselves are often ridiculous and fun. Whether it’s viking penguins aboard longships or blue-skinned giants in sunglasses, there’s a comical feel to the whole thing that helps keep it entertaining. If you’re interested in the latest high-octane challenge, you can pick up Lichtspeer on Steam for a fair $9.99, or 10% off through October 4th.