Hue on Xbox One

With the abundance of puzzle platforming titles being released left and right, some truly admirable endeavors get dragged down by the stream and sadly slip by unnoticed. Almost every game has you jumping about, collecting coins, and beating high scores to force some feeling of nostalgia upon the player, yet every once in a while, a curious little title like Hue comes along.

This is a game that brings something unique and genuinely interesting to an already well-established genre, making it stand out from the bland crowd by not merely striving to mirror the success of the titles that came before, but by creating something that will leave an impression on you. In the end, you will come to realize Hue earns a place next to some unexpected successes like Limbo or Ori and the Blind Forest, making you all warm and fuzzy inside at the thought of this memorable adventure.

Hue relies on a very basic yet captivating concept, namely color. You play as a young boy looking for his lost mother who studied colors, as she now finds herself seemingly trapped inside a world that lies beyond our visible spectrum. Before we delve into Hue’s general gameplay, I feel as though we should first applaud its phenomenal writing and voice acting, which lend this experience a lot of heart. You come across letters written by your mother through which she explains her research or how this feeling of isolation is affecting her, and the soft British tone in which the female actress speaks makes you feel comforted and guided, just like a mother’s voice should. There is a deeply poetic message scattered throughout Hue that will often leave you thinking about its meanings in between its mind breaking puzzling sections, once again bringing that feeling of motherly tranquility and emotion to the player’s attention. 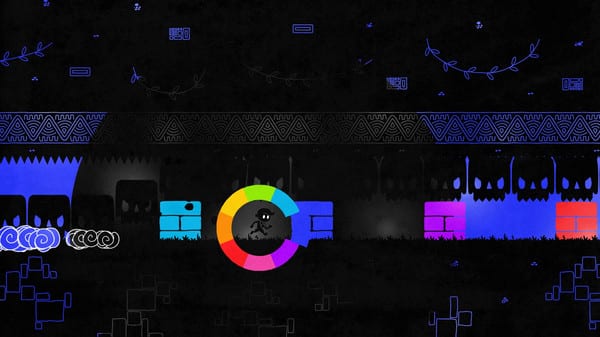 When things calm down, they do so without ever getting boring, and the rather simplistic art style complements that serenity in a compelling manner. The almost cartoonish vibe shifts your focus towards the colors on screen and the spoken words in the background rather than distracting you with beautiful vistas or breathtaking visual feats. Its visuals are surprisingly fitting, and while it may not necessarily win any prizes for its graphical fidelity, the general style more or less serves as a vessel that makes its elements work in perfect harmony without one ever overpowering another. Nothing is ever too loud, too dull, or too obvious, even though there may be one slight discomfort some may experience which I will touch upon later.

So, playing around with all these colors, how does the aptly named Hue handle that exactly? Well, in a very creative yet efficient manner. Objects and obstacles on screen come in a variety of different colors, meaning they can be hidden when switching the color of the background to that corresponding color. If a purple box is blocking your way, for example, merely selecting purple from the selection wheel with a flick of the right joystick will render that box invisible until a different color is selected, like orange or blue. Hue starts of rather simple, having you switching between one or two colors to make your way across an otherwise deadly surface or towards a seemingly unreachable point, yet when more colors are obtained and dyes are thrown into the mix, the possible obstacles ahead will prove far more difficult. It felt as if the game truly wants the player to get a hang of things before increasing its difficulty, yet without certain hindrances ever becoming too easy or repetitive.

After a while, you will learn where certain colors are found within the selection wheel. It quickly becomes second nature to select blue for instance, which makes its gameplay as smooth and as fluid as you want it to be. Yet when there are tons of colors on screen, one could become a tad confused when it comes to distinguishing which color is which since there are two or three colors that arguably look very much alike. It may be your screen’s settings or the way your television is positioned or just your general eyesight that could make red seem more like pink, often leading to failure that rarely leans towards frustration. Luckily, when in the selection wheel, time slows down quite a bit, allowing you to rethink your initial decision if needed and match the color of the obstacle with the color in your wheel. 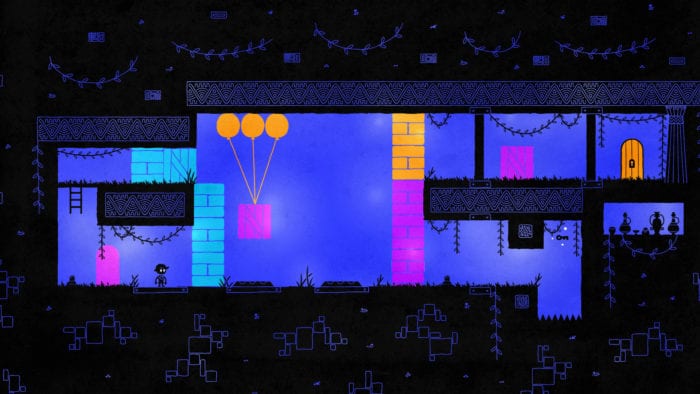 Even when everything is optimally tweaked, however, staring at this color palette for too long may cause some players to switch up the colors automatically. I personally mistook light blue for dark blue on multiple occasions when selecting, simply because I had been working with one shade of blue for so long that I forgot there were two of them in the game. A friend of mine gladly volunteered to give it a go on my console as well, only to run into the same issue with yellow and orange after a longer session. One could argue that Hue could do with a more distinct color variety, but that is purely personal preference. It didn’t exactly bother me and there’s still the option to select color blind mode, yet I could see how its similar palette could frustrate some.

In the end, Hue is easily one of the best additions to the genre in a very long time. Whereas many games struggle to bring their own personality to the platforming puzzle genre, Hue effortlessly succeeds with an interesting concept complemented by a fitting and lovely art style, asking deep philosophical questions through incredibly well-written and superbly voiced narration that brings about some motherly traits. Its puzzles gradually grow more challenging as you progress, which may make it difficult for some to properly distinguish the various colors unlocked throughout the game, but catch a break every half hour to refresh your own perception of color and Hue truly is one of the most creative games you will currently come across.