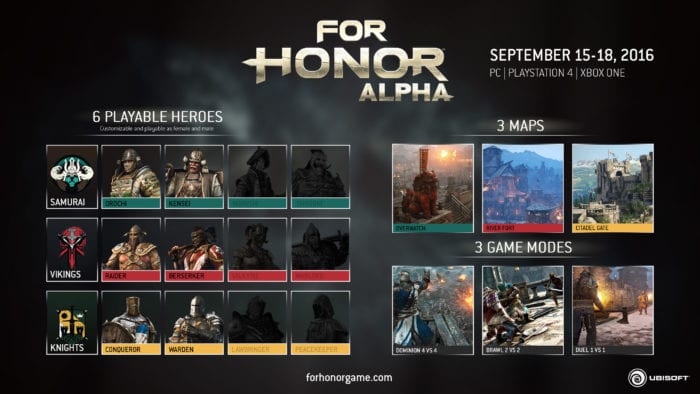 Hot off the heels of the closed alpha for For Honor last weekend, Ubisoft has revealed some insightful statistics about the four day event, in which invited players could test out the multiplayer portion of the company’s brand new, hack-and-slash IP.

In a press release, Ubisoft stated that this was its “largest closed alpha for any title to date”, with hundreds of thousands of players checking into the game for an average playtime of 4 hours and 38 minutes, more than a third of whom played for at least three of the four days that the servers were live.

Additionally, For Honor was in the top ten most watched titles on Twitch for all four days of the alpha, and at one point was even at 2nd in the list, beating World of Warcraft and Dota 2 to the cut.

If you didn’t manage to get into the closed alpha, don’t worry, as the team plan to hold an open beta sometime before the full game releases in February of next year.

In fact, according to Ubisoft, demand to participate in the upcoming beta is now apparently 40% higher than any of their previous titles.

For more For Honor news, stick around with Twinfinite.