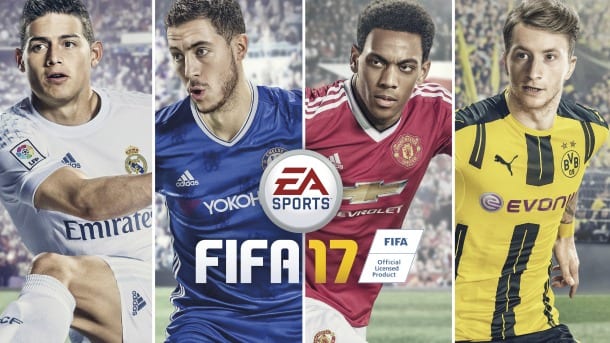 The FIFA series has been under some pressure over the last couple of years. With only incremental changes being made each year and frustrating inconsistencies in terms of gameplay and online stability, alongside the return to form of the Pro Evolution Soccer franchise, FIFA was beginning to feel stale. This year, FIFA 17 has made some huge changes, including a shift to EA’s Frostbite engine and an all-new single-player mode called The Journey, and as a result, the overall quality has mostly improved.

Being the first FIFA game to run on the familiar Frostbite engine is the biggest change we’ve seen for the franchise in years. The graphical possibilities have been made clear by titles such as the latest Battlefield games and Dragon Age: Inquisition. For FIFA 17, the graphical upgrade sees player likenesses improve – they no longer look like zombie versions of the real-life player – and small elements such as the way the pitch breaks up as the game progresses make the matches feel much more authentic.

I was worried that the engine change would see the gameplay alter significantly but thankfully it feels much like the FIFA gameplay we have become so used to. Offline gameplay is slightly faster, feeling more like the arcade-like Ultimate Team mode, whilst the new attacking intelligence system gives you more options in attack. The shooting also feels sharper. The ability to shoot on the ground, which was strangely absent from recent games, allows you to finish like a real player would, rather than opting for the way the game makes easiest. Passing can still feel slow and are often misplaced but it prompts quick movement and intricate through balls, even if that isn’t always made easy. Gameplay also feels more aggressive and although defenders are still prone to the not so odd mistake, they seem stronger in the tackle and more likely to come away with the ball. If you are able to get close to a quick player, which isn’t always the case, he isn’t as likely to skip past you as in last year’s entry.

Away from the pitch FIFA 17 is still unrivaled. From the menu layout, to the match day commentary, everything is perfect. The way EA has combined the visual atmosphere created by the crowd with the roaring cheers and perfect voice performance by Martin Tyler mimics the excitement of a big game. The camera captures every celebration as the TV camera would and players perform just as they do in real life. Alongside the use of official licensing, this is where FIFA most outshines PES. The menus are well organized and shift your favorite, or recently played modes to the front, making getting to the matches quick and easy. This is often overlooked, but when compared to the stale presentation in its rival game, it cannot be ignored.

After the engine change, the biggest change this year is the addition of a story mode called The Journey. The Journey puts you in the shoes of Alex Hunter, looking suspiciously similar like a Manchester United forward, as he makes his way from the muddy fields of youth football to the top of the Premier League. Alternating between training sessions, match days, and short cutscenes, you improve Alex’s stats and ensure he has a chance at breaking into the first team. Like the similar modes in games like NBA2K, the dialogue can be cheesy but all the characters are detailed and performances are good. It is surprising that so much thought has gone into the mode with real world players adding to the authenticity and the match-day atmosphere following over from the rest of the game.

Football fans are emotional beings and The Journey provokes many of the same feelings as real world support. Alex is taunted on social media, he loves the idea of winning the FA Cup, and his career, always scored fantastically by Atticus Ross, constantly seems to be on a knife edge. Everything that happens to your version of Alex Hunter will want you to achieve the grandest of goals. Although the way he acts at times feels out of place, and that the story portrays a friendly version of the footballing world, growing Alex Hunter as a person, as well as a footballer, is simple but great fun, especially as he begins to follow his dream of playing for one of the best teams in Europe.

When it comes to tried and tested modes, FIFA Ultimate Team is still the standout. Its compelling team building mechanic, eBay style trading system, and choice of league and tournaments will see you sink countless hours and possibly quite a lot of money to keep you at the top. The new additions also flesh out the mode even more – FUT Champions gives the top players a chance to show off their skills for the biggest rewards, and Squad Building Challenges make those seemingly useless players the final piece of a puzzle you’ve been working on. The only problem this early in the game is that even low rated players are worth more than they will be in a few months time, making discarding them as part of a Squad Building Challenge a loss that isn’t always matched by the reward. Draft mode is the standout, though. Becoming more and more complex over the weeks, as Team of the Week players are released, you rely on luck and formation choice to create the best team. The rewards, if you do well, also far outweigh the price of admission.

The other returning modes have stayed the same for the most part. Career mode has been given a new lick of paint and a few new goals to meet, matching the business considerations of a modern football club. Seasons remains the same simple yet fun race to the top of Division One and Pro Clubs has received an overhaul of how player ratings are calculated, ensuring players consider team play rather than focusing on themselves. The returning modes are excellent options for when Ultimate Team and The Journey become stale because they offer something different and new goals to reach. They might not be new but they are still around for a reason.

However, online play is where the problems with FIFA 17 begin to manifest. The faster pace of online matches make the gameplay issues stand out. Goalkeepers will often make horrendous mistakes, the physics engine will cause goals never seen in real life, and defenders often seem clueless positionally and tactically. Defenders aren’t able to react as quickly as attackers, resulting in unforced mistakes and some truly undeserved defeats. Also, just like every FIFA in the past few years, the servers can be very unreliable. My first online match saw me booted from the servers after 40 in-game minutes, returned to the main menu, and told I had lost connection, only to be let back in immediately. The real kicker is that, as soon as you get back in, you are punished for ‘quitting’ the match. In Ultimate Team, you lose the match, the potential coins, and make fewer coins in future matches. It can seemingly happen at any given time and it is extremely frustrating. How this problem still persists, especially at off-peak times, is unbelievable.

As always, FIFA 17 dramatically outshines its rival off the pitch with its re-creation of the match-day atmosphere. On the pitch, the transition to Frostbite has improved the look and feel of the game but a few gameplay inconsistencies frustrate and the returning server issues are just as prevalent as always. However, FIFA 17’s Journey mode offers something so surprisingly detailed and thoughtful that it takes the whole game head and shoulders above recent games in the series. Ultimately, FIFA 17 may be familiar in good and bad ways but it offers more than enough new content and slightly improved gameplay to make it worth picking up over its rival.