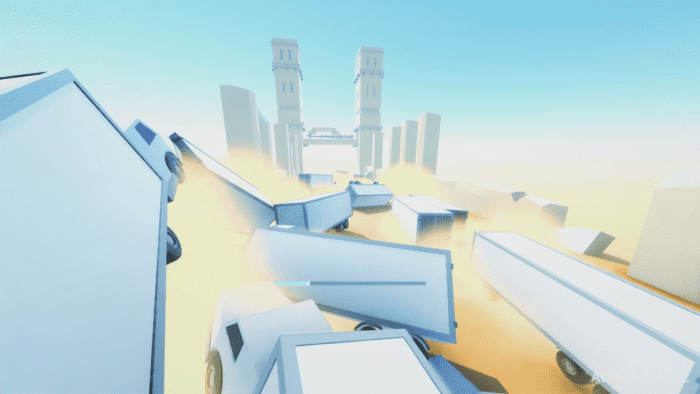 Your first experience of Clustertruck may well have been on YouTube. Popularized by commentators and Let’s Players, this game’s alpha has been around for a long time. Finally this strange yet novel idea has been turned into a fully fledged game, and you can put your truck jumping skills to the test.

Clustertruck is developed by Landfall Studios, the Swedish team behind Air Brawl. That game was built on grass-roots popularity through Reddit, which has spurred them on to explore new ideas, including a platforming game in which you jump between trucks on a dangerous highway. This is the heart of the game teased in the alpha, and they haven’t strayed too far from it. The game feels like a complete experience founded on this unique idea which, although incredibly simple, works very well.

The gameplay of Clustertruck is the same in every one of the 90 missions on display at launch. You are an unknown entity on the back of a truck. There’s a goal in the distance, and you have to go through hell and high water to get there. The only controls are WASD and the Space Bar, and you have to make it through the onslaught of vehicles without falling to your death. Think childhood favorite “The Floor Is Lava” but with higher stakes, and the furniture is moving unpredictably. 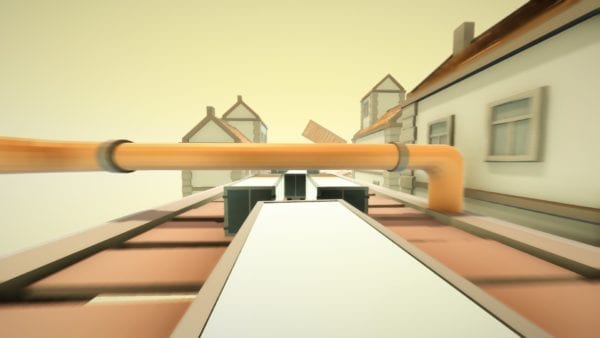 To help you out on your truck-jumping mission you’ll be able to use some abilities, which you can unlock with your style points for completing missions at high speed, or with excellent flair. Once you have enough you can choose from a myriad of abilities. On the left side of the skill tree you have the likes of an air-dash, double jump and a teleport, and on the right you have the ability to slow time or fire a placeholder truck to get you out of a tight spot. I opted for the double-jump and truck shooter and that saw me through most of the game, though when I finished I spent a lot of time messing with the abilities and had a ton of fun making ridiculous combinations. The abilities are controlled by mouse clicks which don’t feel intrusive due to the already simple yet effective control scheme.

This leads me on to my next point, which is replayability. Clustertruck has it. About halfway through the game, you may realize that the leaderboards in Clustertruck are looking for speed. Once I realized this, every level became, as well as an effort to complete, a mad dash to the finish line, combining my abilities to try and pip my rivals to the post. You can also race against the ghosts of the best players in the world to hone your skills. This is an insane amount of fun, and hard to capture with words. The thrill of teetering off a truck, making the leap of faith whilst your metal comrades fall to their doom is very satisfying at high speed, and something I think would only be improved by VR. It does seem like this game is made for it. 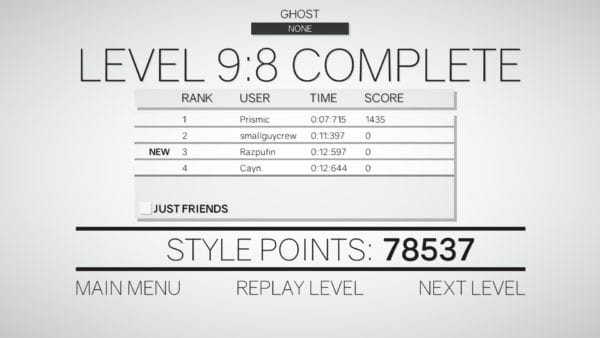 Every 10 levels of Clustertruck is contained in a world, which ranges from winter to steampunk to lasers to hell. These environments are all unique and bring new challenges to the table. The ancient level brings Greek pillars and structures ready to parse your trucks into non-existence, whereas the Steampunk missions throw up obstructing pipes and cogs to throw you off. The difficulty grows as you progress, culminating in a very Super Meat Boy-esque difficulty spike in the final hours.

This needs to be said, because although I sailed through the game at pace, I hit level 8-9 and the game threw mw straight into the deep end of the pool. The trucks become scarce and the game becomes brutal. The weird part is that this steep spike subsides for part of World 9 and then returns at the final level, which I won’t spoil, but will make it clear that it took me two days of off and on playtime to beat it, after finishing everything else in around five hours. It’s akin to first-person Super Meat Boy levels of difficulty. It’s controller-smashing frustration, but so eternally gratifying when you get through this game’s few rough patches. Each level, although on the same track, does not have the same drivers, so the A.I. is very unpredictable. This adds flair to the game, and means each run is different, so you could smash the top speed if you figure out a level’s kinks. 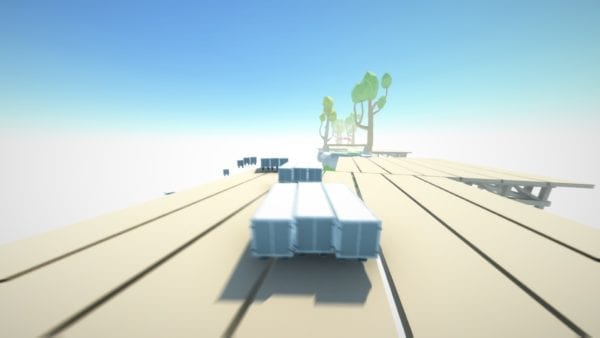 In regards to sound and visuals, the game is a low-poly delight. The agoraphobia-laden landscapes are limited, but shaded well enough to make it aesthetically pleasing. It reminds me of SUPERHOT, another game that used low-poly visuals in a fresh, endearing way. The sound design also works well. Much like Mirror’s Edge, when you are falling to your death, or another truck (but accruing a TON of air time style points) you can hear the wind rush past you, which is even more terrifying with headphones on. The soundtrack is also brilliant – a Kirkhope-esque  dynamic flowing track that changes slightly between worlds but keeps the BPM high enough to make your heart race. It can get slightly annoying when you’re retrying a level over 300 times (I’m looking at you, 9-10) but not to the point where you could complain. I loved it.

The game also features a cool map editor and Steam workshop integration, meaning if you get bored of the game’s levels at launch, the world is your oyster. There are already some very interesting creations up there that I’m not through with yet.

If anything, Clustertruck is a simple, novel idea fleshed out and turned into a viable game. At its current price, it’s also worth every penny, and I can see myself using this for study breaks, a filler game for listening to podcasts, and that’s not counting my current strive to get to the top of the leaderboards. If you like a bit of rough and tumble in your games tied with adrenaline-pumping action, this is a game for you.