Traditional 2D anime fighters have seen a large rise in popularity in the last couple years with the powerful surge of new games in the genre. And it doesn’t get much more traditional than Studio Saizensen’s new fighter, Blade Arcus from Shining. Blade Arcus is a crossover fighter that features characters from the Shining series of games which, like Blade Arcus, were also published by SEGA.

With beautifully drawn artwork and stylization, the game’s look is actually quite stunning. Each stage is wonderfully designed while being put together in a way that allows the characters to standout and remain the focus of each fight, which meshes together to create a fantastic visual experience. It is unfortunate however, that a game with such an interesting appearance would have characters that are anything but. It’s easy to see how a player coming into Blade Arcus having prior favorable experience with the cast of the Shining series would enjoy seeing their favorites in a whole new light. However having no previous knowledge of the characters before playing Blade Arcus, they all came off incredibly bland and far too stereotypical of general anime characters.

The only thing more cookie-cutter than the characters themselves is the story scenario they are placed in. Eight all-powerful sacred orbs have been scattered across the land and given to eight warriors. It is your job to defeat each fighter, collect all eight orbs, and be rewarded with a single wish of your choosing. There really isn’t much else to the story than this. Each of the 16 playable characters have their own storylines and character interactions, but the majority just boil down to unimaginative motivations such as “I need to save my friend” or “I want to be strong,” which ends up feeling like a sorely missed chance to give each fighter some semblance of a unique identity. 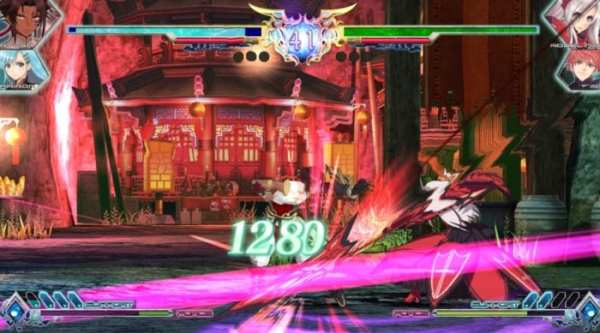 Where Blade Arcus fails with its characters and story, it certainly makes up for it with very solid gameplay. 2D anime fighters can be some of the toughest fighting games to learn, but Blade Arcus simplifies much of the combat while still keeping it fast-paced and highly enjoyable. Each character has three normal attacks: light, medium, and heavy. All three attacks differ in range and the speed at which they come out as well as altering each character’s special moves. Special moves are a place that the simplification very much stands out as with standard fighters a character can come equip with six or more special attacks. However in Blade Arcus, each character has access to only two. Special moves will change depending on which normal is used to activate it, with effects ranging from faster speeds with a light or a wall bounce with a heavy.

Special moves can also be activated as EX using meter which will further augment each ability in various ways, such as increasing damage or providing super armor on the move. Meter can also be used to cancel out of a normal attack with Offensive Force, which allows for much longer combos and some really big damage. Defensive Force will also allow the player to escape from a risky situation by having the character jump backwards after blocking an enemy attack. There is also an AP Gauge for each player that provides the Reversal Strike, a powerful blow-back attack with super armor, and Rejection Block, a move which pushes back your opponent after a block, abilities.

One of the best attributes Blade Arcus has is the support character feature. When choosing in character selection, you will have to choose two characters. Your primary character is the fighter you will be using in the match and the secondary is the support character. A support character can be called upon in battle to perform certain maneuvers depending who the character is (though it’s mostly attacking the opponent). Depending on when you call your support they will hit the enemy with varying attacks, either knocking them down, providing an in, or extending your combo. You’ll also be able to all four units of the Support Link Gauge unleash powerful Super Moves with both characters at once, decimating the opponent. The most interesting feature of the support system is that you’ll have the ability to switch your primary and secondary characters in-between each individual round. This keeps the gameplay fresh and allows you to change up your gameplay style on the fly if what you’ve been doing hasn’t been working. 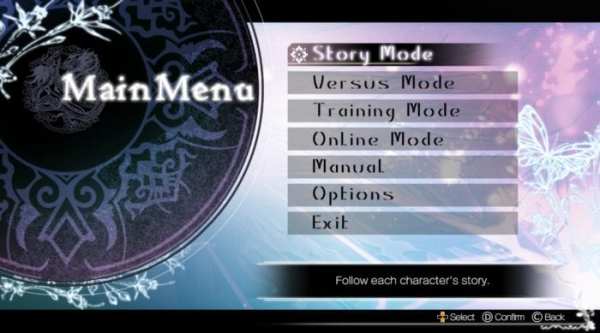 With such fantastic combat, it’s a true shame that the game itself feels like a skeleton when it comes to gameplay modes. There are four playable modes in the game: Story Mode, Versus Mode, Training Mode, and Online Mode. Story Mode is very short and definitely won’t entertain many for long. Versus Mode and Training Mode are about exactly what they sound like, a means to play with friends and to get better at the game. My experience with Online Mode was nonexistent, as every time I searched for a game there was either no one online playing or the servers just said there wasn’t. That being said, if you don’t have anyone to play Blade Arcus with, chances are you won’t be sticking with it very long.

Blade Arcus from Shining is one of the best games to pick up if your interested in learning or teaching someone how to play a traditional 2D anime fighter. The simple mechanics and beautiful visuals are enough to keep someone enticed long enough to feel adequately comfortable to move onto more popular and complex fighters. But the bare-bones content and uninteresting story/characters certainly won’t keep most around very long outside that.