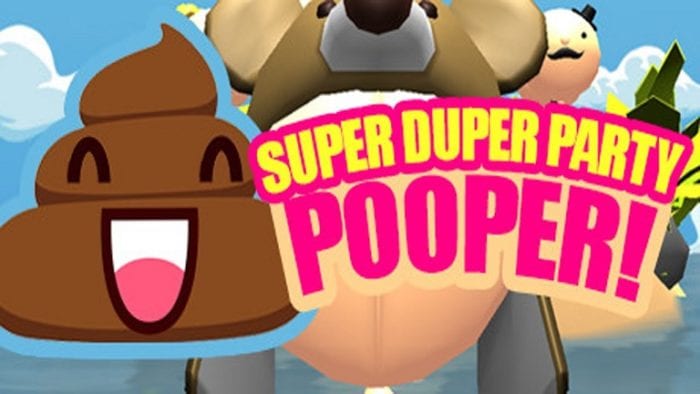 When it comes to certain games, it’s easy to dismiss them simply based on the premise and overall look. Super Duper Party Pooper, a rhythm game about eating food to build up your “ammunition” before raining fecal justice upon the partygoers behind you would make it extremely easy to do this. However, in the case of this remarkably immature and underdeveloped game, I think there’s a much better list of reasons to cast it aside and move on.

As I mentioned, Super Duper Party Pooper is, primarily, a rhythm game. Players must press the Q, E, W, A, and D keys to consume food presented on trays in different areas of the screen, presumably to the beat of music playing along with the “action”. The game’s first failing is here, where the rhythm of the game itself seems to be off of its own beat. In a game where timing is supposed to be crucial for the high scores needed to move on, this is a serious issue.

The next part of Super Duper Party Pooper is, of course, the pooping. Behind our food-crazed protagonist, you see, is a dance floor full of people trying to enjoy themselves and get down to the tinny, off-beat music. Once you’ve filled your gut with snacks, it’s time to launch poop at these hapless fools, and ruin their evenings by splattering them with your post-digestion projectiles using a poorly-implemented aiming system that’s tough to get the hang of.

So, with poor beat tracking and a badly-designed aiming system, what does Super Duper Party Pooper have as a positive? The answer may be nothing at all. Sure, there’s Steam Workshop integration of some kind, and the game presumably lets you load your own music as long as you know the beats per minute, but I couldn’t get this feature to work, so I was stuck with the game’s lifeless, poorly-used soundtrack.

So, to recap, Super Duper Party Pooper is a rhythm game with no real rhythm, with a bolted-on shooting game with poor aiming mechanics. Throw this all in with its lifeless graphics, inane premise, and poor soundtrack and this is, quite frankly, possibly the worst game I’ve ever played. I struggle to think of any redeeming qualities, and that’s setting aside the game’s awful premise. Perhaps the game’s only saving grace is its $0.99 price on Steam, but that’s still a dollar more than I’d recommend paying.