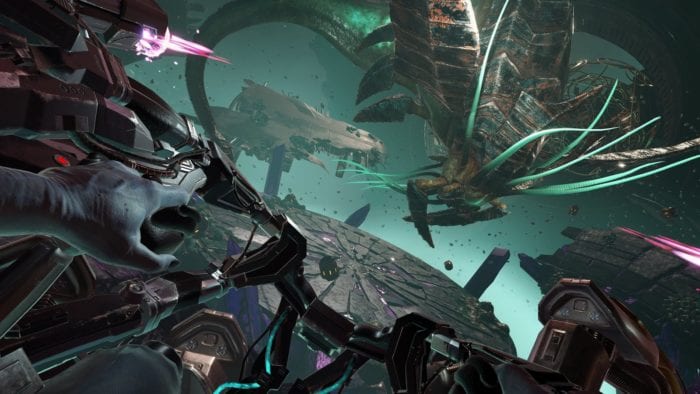 If someone picks up a PS VR this fall it’s likely one of the first games they will play is the compilation title PlayStation VR Worlds. Taking five tech demos used to show off Sony’s virtual reality hardware as far back as when it was first announced as Project Morpheus, PlayStation VR Worlds might seem light on content at first glance. However, Lead Designer Simon Hermitage promises that is anything but the case.

Speaking to the game as a whole, “We know you will want to play it again and again, and show it off to your friends and family, so we added a load of features you might not yet be aware of to keep you coming back for more,” he writes on the PlayStation Blog.

First off, four of the five experiences will have multiple game modes, meant to either allow different types or players to pick up the game or to add replayability. The London Heist, a first-person shooter experience, now includes an optional mode adding laser sights to the guns and reducing enemy damage. “With this mode enabled, you can experience The London Heist as more of an interactive story and still get to the dramatic finale.” Likewise, the undersea experience, Ocean Descent, now features three different versions of the dive, including a less intense version for “VR newcomers.”

When it comes to adding meat for players to sink their teeth into in the long-run, The London Heist will have four shooting ranges, complete with leaderboards for each. Meanwhile, Dangerball, essentially 3D pong, will feature a score attack mode, Tournaments, and Quick Play. And then VR Luge will include time trials, leaderboards for all four of the experience’s tracks, and the “fiendishly difficult” VR Luge Tour. The Tour is essentially a time trial, but for all four tracks together.

Though not featuring leaderboards or multiple modes, Hermitage thinks the fifth experience in PlayStation VR Worlds can hold up just as well. Called Scavengers Odyssey, the experience sees you take control of a salvage vehicle exploring derelict space hulks. Hermitage says to expect “an intriguing backstory to discover as you quest through bug-infested wreckage.” You can “explore and discover the scattered Blackbox recordings and unearth details of what happened to these giant space wrecks.”

On top of all of this, trophy hunters can rejoice as PlayStation VR Worlds includes a Platinum Trophy. Challenges, and their corresponding trophies, will involve “tricky gameplay targets to achieve, special actions to perform, and new places to visit” across all the titles.

PlayStation VR Worlds in a launch title for PS VR when it releases Oct. 13.