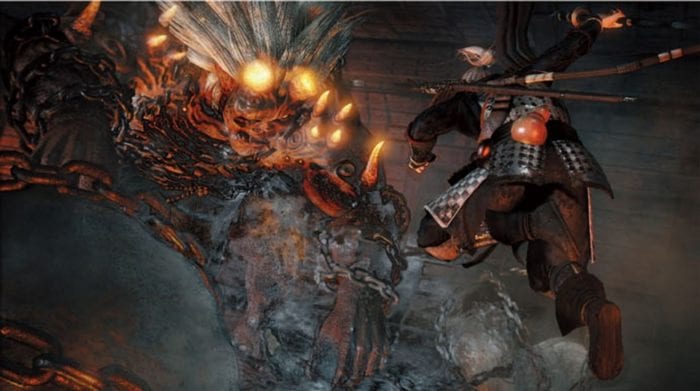 Onryoki is the first major yokai boss you’ll face in the Nioh beta demo. Don’t let his intimidating appearance shake you. He hits very hard, but his patterns are also extremely easy to follow. First off, I recommend using a fast weapon like the katana or even the dual katanas, if you have them. Axes and spears will do better damage, but they’re also a lot slower, and being speedy is much more advantageous overall in this game. If you do choose to go with an axe or a spear, considering taking on this boss with either mid or low stance – you’ll take a hit in damage output, but you’ll also have more stamina left over for dodging after each combo.

In his first phase, Onryoki will swing two giant metal chain balls at you. One of his most dangerous attacks is an overhead swing with him smashing the two balls right in front of him. You can read this move pretty easily by looking out for him raising both of his arms. Once he does this, either move as far back as you can, or dodge to his side if you don’t have the space. It’s an easy move to read, but it can take out more than half of your life bar if it does hit you.

Onryoki’s other moves really just involve him hitting one ball on the ground at a time, or swinging them around. Each time he slams one ball into the ground, stay just out of range and watch to see what he does next. If he brings down the other ball into the ground, rush in immediately for a few quick attacks. If he chooses to swing the second ball, wait for the ball to swing around his body twice before going in for the attack. If you hit his head enough, or drain his stamina, you can stun him for a few seconds and get even more hits in. However, don’t get greedy, as he’ll quickly recover with a counter swipe.

Keep at it until you bring him down to half health, and the second phase will start.

In this phase, Onryoki will do away with the balls and start coming at you with his claws. The demon aura will start spreading around the arena as well, so make sure not to waste your Ki by spamming the dodge button. Every now and then, Onryoki will walk over to the unchained balls and throw them at you. The balls are pretty easy to dodge too; just dodge to either the left or right the moment the ball leaves his hand. When he’s not walking over to the balls, he’ll be coming after you.

Occasionally he’ll try to do a grab attack, and you can read this move by looking out for a slow windup where he brings his arm up and comes in for a relatively slow swipe. Avoid this at all costs; the grab attack can be lethal, especially if you don’t have enough elixirs for this phase. There are two attacks with long recovery times that you can use to go in for more strikes. The first is when he claps his hands together and brings his fists down onto the ground. When he does that, I recommend going in for two strikes before backing away.

He’ll also perform very wild and fast short swipes before toppling face first into the ground. These swipes are easy to dodge as long as you stay out of range, and once he hits the ground, that’s when you attack. I’ve found that three strikes are pretty safe during this recovery period, and it’s best not to get greedy for more than that. If you have your guardian spirit power charged up (I used the wolf Kato for fire damage), this is a good time to use it too.

I advise using the spirit power only when he’s near death to finish him off. If you’ve been attempting this boss for a while now, it’s best to save the spirit power for a really good attempt when you’ve almost got his health to zero. The power can take quite a bit to charge, especially if you’re just rushing straight to the boss after each death. Onryoki really isn’t that hard of a boss fight in a technical sense, but it’s easy to die to mistakes because of the sheer damage he can do to you, and the small number of elixirs you have available. Just keep at it, learn his patterns, and you’ll have him beaten in no time.