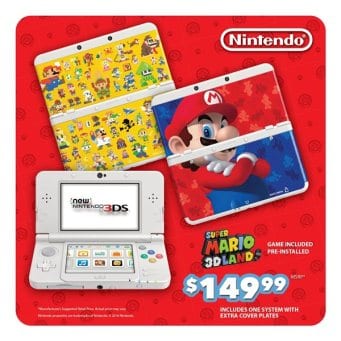 Starting on the 26th, Nintendo will be hosting a back-to-school sale for games sold on the Nintendo 3DS and Wii U eShop. Games that will be on sale include:

Each game will be sold at $19.99. Nintendo’s game store can be found here as well.

Select stores will also be selling a Mario-themed New 3DS that comes with a digital version of Super Mario 3D Land. In addition, Nintendo will be holding a $50 discount on the New 3DS.

Lastly, Nintendo will release an assortment of amiibo bundles beginning on September 9th. The bundles include two Yoshi’s Woolly World bundles, each packing a blue or pink Yoshi. There will also be two Mario Party 10 bundles, including either a Peach or Bowser amiibo. Finally, there will be a Captain Toad: Treasure Tracker bundle that will include the game’s titular character.

Amiibos aside, there are some great games in this sale, including Animal Crossing: New Leaf, which is often believed to be the best game in the series. Additionally, the sale would seem to be the best time to buy the New 3DS, so anyone who was on the fence about upgrading may now have a reason to do so. For those who have already upgraded or are content with their standard 3DS, these gems are worth checking out.