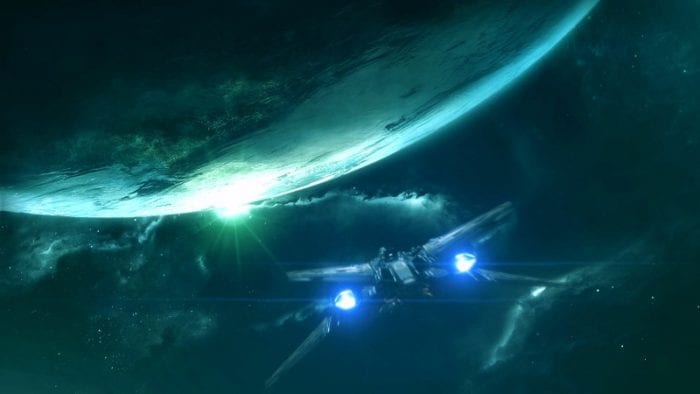 The RTS genre has lost much of its popularity over the years, but fortunately, that hasn’t stopped developers from occasionally still making titles that fall into this category. One such game goes by the name of Meridian: Squad 22 and was released on Steam earlier this month by Elder Games, the same company that also brought us Meridian: New World back in 2014.

Unlike its predecessor, Meridian: Squad 22 is a single-player only experience that offers a pretty decent bang for the buck thanks to its three game modes, the most interesting of which has to be the campaign. While not without its problems, the fully-voiced campaign mode is pretty enjoyable for the most part and does a good job at gradually introducing players to the game’s mechanics while also presenting a storyline that’s very easy to follow.

Unfortunately, the story itself is only marginally interesting and the main characters aren’t that much better either. The main problem with the campaign is that you don’t really feel like you’re doing anything important even though the game would suggest that the very future of the human race depends on your actions. Instead, Meridian: Squad 22 feels more like a classic case of ‘collect this to build that and then defeat some generic enemies in order to clear the map and move on to the next one.’ Rinse and repeat. That said, the game does have some redeemable qualities that make the campaign worthy of playing in spite of its flaws.

First and foremost, the music is great and very reminiscent of the original StarCraft at times. It’s a shame that the whole soundtrack clocks in at only one hour because the music is definitely one of Squad 22’s strong points as it always manages to keep you engaged and ready for action. Speaking of redeemable qualities, the game’s research system is another nice addition that does a really great job at spicing things up during missions. The research system not only provides players with increasingly better bonuses and units as the game progresses, but it also gives them reasons to push forward with the campaign and see what else can be unlocked in the next mission.

Unlocking various upgrades is done by collecting a certain number of combat, defense, or economy canisters, all of which can be found in random places all across the various maps and are always worth going after. Having said all that, the research system also tends to work against the game because once you gain access to a stronger unit there’s really no point in training any of the previous ones that come from the same building. Technically, some units are indeed more effective against certain enemy types like infantry or vehicles. However, the enemy’s strategy always involves attacking en mass with its best units once the population cap is reached, which means that the player has to do the same in order to successfully defend and eventually win.

Consequently, Meridian: Squad 22 is more about attrition than actual strategy as the only way to win is usually by amassing more units than the opponent because trying to outsmart the AI like you would in most strategy games is not really an option. Common RTS strategies like harassment or rushing quickly get shut down by the enemy and lead to a swift and often decisive counterattack. Although an interesting addition to Squad 22, the new naval units are only useful when it comes to gathering resources, and have little effect on the outcome of a mission. Air units are a bit more useful in certain situations thanks to their speed, but ultimately most battles will revolve around ground-based mech vs mech battles.

While the gameplay itself could have been a bit more interesting, the lack of variety is what really drags this game down. In addition to only having one playable faction, Meridian: Squad 22 also only has one enemy faction that seems to produce the same units in the same order all throughout the game. Unfortunately, the two factions are one and the same and the only thing that sets them apart is the color, with blue being assigned to the player and red to the enemies. This isn’t necessarily a major problem at first. However, as players progress through the game, the lack of additional factions and units becomes increasingly noticeable, making the gameplay feel more and more repetitive.

Elder Games attempts to fix this problem by cranking up the difficulty to the point where the AI feels like it’s cheating most of the time. Strangely enough, this actually works in the game’s favor thanks to the hero units and research system, which balances things out once enough perks have been unlocked. The hero units from the campaign aren’t nearly as fleshed out as something you would find in Warcraft III or Dawn of War II for example, but their damage and large health pools do make them a valuable asset against an enemy that almost always outmatches the player in terms of tech.

Combat aside, it’s worth talking a bit about the graphics because Meridian: Squad 22 is quite a pretty game and features some very nice cutscenes. What’s even more impressive is that this indie project was developed by a single person who managed to create a good-looking RTS pretty much all by himself. From lighting to particle effects and all the way to the little blades of grass moving with the wind, it’s clear that developer Ede Tarsoly put a lot of work into the visuals and it really shows.

Meridian: Squad 22 is a worthy effort by Elder Games and a good choice for anyone who is new to the genre and wants to experience a real-time strategy game for the first time without having to burn a hole in their pocket. For $15 players get to experience a fully voiced 10-hour long campaign accompanied by great music and visuals, along with two additional game modes that can add several more hours of play time. At the end of the day, however, Meridian: Squad 22 is still a one-man project and there’s not much here that might appeal to RTS veterans who are accustomed to the complex mechanics. intricate stories, and large scale battles found in big budget strategy games.