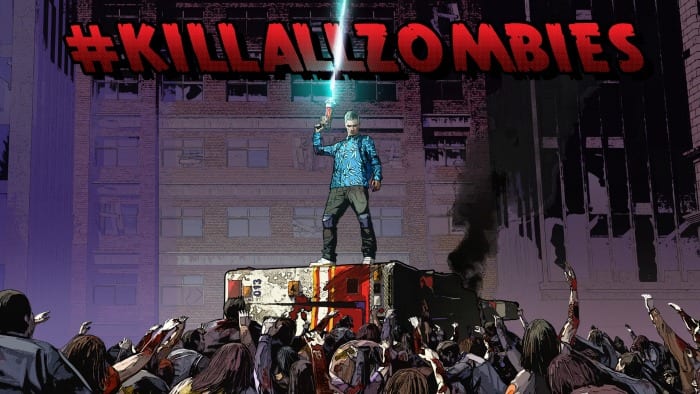 #KillAllZombies is one of those games that is perfect for someone that wants to be able to sit down and game for 20 or 30 minutes but doesn’t have a ton of time to invest otherwise. The game isn’t one where you need to spend 15 minutes in cut scenes, as the story unfolds, so the player knows what they’re supposed to do once they take control.

In Beatshapers’ newest title, the controls for this dual stick shooter aren’t terribly complicated (one stick controls where the player moves and the other controls where they shoot) and there really isn’t a story to learn about so players can just jump right into the action.

That’s the big positive of #KillAllZombies, a video game that appears to have been named by someone who understands what social media is but doesn’t realize you need a little subtlety before it can be used correctly.I’m sure it was supposed to have something to do with how the action is supposed to be unfolding, but the developers seemed to have forgotten exactly why once they started making the game. The official description of #KillAllZombies is laid out on the Xbox One Store as taking place in a distant future where zombies were at one time a real problem, but now seem to have been relegated to an entertainment device. The game is supposed to take place on the set of a television show where viewers vote on how many zombies, and what types of these rotting monsters, are released onto the “set” to harass, chase, and try to kill the nameless main character.

While that all sounds pretty cool, all that information is given in the official explanation of the game, but none of it is even remotely alluded to during the action. It’s more than a little weird that the developers came up with such an interesting backstory, and then completely ignored it or failed to come up with a way to convey it in the actual gameplay. It’s rather obvious that the zombies are coming from somewhere, and the way the map is setup certainly makes it plausible that they are being released into the area, there is no indication, however, that a television audience is out there watching the action unfold.

There is also no sign, unless it’s easily missed, that anyone is out there voting about how many zombies or what kind are unleashed into the pen. The game’s map is indeed in a pen and that is the only map players will ever get to see in #KillAllZombies. This is one of the biggest drawbacks of the game, and while the developers added some features they likely hoped would keep the map fresh, it cuts down dramatically on the desire to play this game for long periods of time.

There are times this hexagonal floor will rise up a bit, or an entire section will go up a few levels and encircle the players or the zombies. Sometimes the floor will aid in the player’s escape and other times it will trap our main character into a smaller area with the zombies where death is certain. The entire point of #KillAllZombies is that the player’s death is certain. What the player has control over is just how long they survive before death eventually comes.

In order to avoid death, there are a couple of weapons players can choose before each round. As you prepare to dash about, shooting hither and yon, you can choose between a machine gun, a few different models of pistol, or a shotgun. As the round unfolds players are able to change their selection as another gun appears on a kind of platform the player can then run to. Where the game stands out from some of the other dual-stick, zombie-based shooters already on the market is that when the character advances a level, players are able to choose from four perks that will kill even more zombies than they could by simply shooting them.

The trick here is the four perks are not always the same, and those perks are not always that effective. Choices that allow players to get kung fu type skills is neat, but isn’t really going to help when dozens of zombies are rushing towards you. Other choices, like being able to turn yourself into a massive zombie yourself that can kill with one touch will keep you alive a bit longer. In #KillAllZombies, the length of time where a player stays alive is measured in a matter of seconds, as the perks wear off after a short period of time and the player has to find a way to go back to killing with the more traditional guns until they are able to advance another level and get a new set of perks offered up.

The one map issue becomes even more of a problem considering #KillAllZombies has three different modes all taking place on that same familiar landscape. Survival mode is the base game, where players are just trying to stay alive as long as possible. Vault Defense is a kind of tower defense mode that allows players to place turrets and other methods of execution while also running around shooting zombies themselves in order to keep them away from a fence surrounding a vault. Should the hordes of undead get in, the player dies.

The third game mode is a couch co-op mode much like the survival mode, though your teammate has the ability to revive you if they can stand still long enough without being killed themselves to do it. There isn’t an online multiplayer mode which seems especially odd considering the developers talked about interactivity in the title’s description. There is a leaderboard that will allow you to check your total survival scores against your friends and anyone else online, but the game misses out not allowing a true online multiplayer mode.

When looking at #KillAllZombies as nothing but a time waster, the game stands up as “ok.” If you have 10 or 15 minutes to spare and want to play a video game but don’t have time to really become immersed into a game’s world, there are worse choices out there. The problem is, the complete lack of story and lack of maps makes this title feel pretty shallow.