Imagine tossing bits of checkers, Super Smash Bros. and Pac-Man into a blender and flicking the power switch. You’d think the result would be a foul concoction of ingredients that violently clash, but in truth you’re presented with a deliciously refreshing smoothie in the form of Inversus.

Inversus is built upon a very sleek and simple idea. You play as a black square that can freely move across the white tiles whereas other black tiles serve as a wall, with the opposite being the case when you’re player two in an online Versus game. To destroy the tiles blocking your movement, you can shoot in all four directions to create a path. You have a chamber with up to five ‘bullets’ that automatically reload over time, yet you can charge shots to shoot three rows wide in a certain direction as well as collect red ammunition power-ups that will instantly reload a bullet and shoot one off at a much higher speed.

Both in the online Versus matches and the singleplayer or co-op Arcade mode, this premise makes for an incredibly fun and addictive experience, mostly because the controls are so simple and smooth on the surface with a lot of tactical depth to it when you grow familiar to the way it all works in practice. Since Inversus is definitely meant to be played with friends, we’ll first discuss the Versus mode that has you playing against others in 1v1 or 2v2 matches. This is where most of the game’s tactical elements come into play and where most of the fun will be had if you have a competitive buddy to play against. 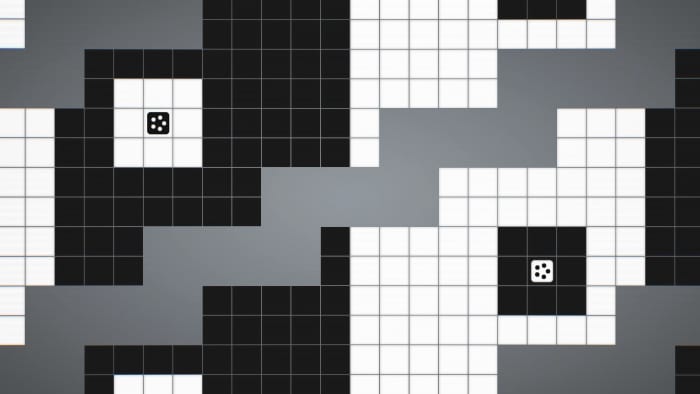 The goal is simple: you have to hit the opposing player with your bullet a total of three times in order to win the match. Since you can only move across surfaces of the opposite color as your cube, it’s easy to create paths for yourself whilst blocking the way for the other party. While that may sound fairly straightforward on the regular maps, it gets infinitely more complex when the maps become borderless.

When you reach the bottom of some maps, you’ll reappear at the top of the screen and vice versa, sort of like with Pac-Man. If the opposing party is charging a downward shot and you feel cornered, simply moving down only to reappear behind them grants you a tactical advantage, especially since charged shots can’t be cancelled. However, the same map rules apply to bullets, which can at times get stuck in an infinite loop until the opposing player is either hit or blocks off its trajectory.

It’s a mechanic that can truly mess with your mind and one that’s pretty difficult to fully explain on paper, but once you get the hang of it, the depth becomes unparalleled. Will you close your rival in and finish him off when you have him cornered in a chunk of the map, or will you force your opponent to waste all his bullets and charge in on him while he’s waiting to reload? Maybe you’ll make the enemy feel as if he’s won, only to block his shot and finish him off by surprise.

Versus matches can be over in under a minute, yet they can also last up to five minutes depending on how good both players are. The borderless maps truly messed with my mind, giving my friend the greatest advantage – a disoriented opponent – yet simpler playing fields allowed me to time after time force him into a corner and finish him off while he panicked to create himself another surface to traverse. When maps reached a balance between strategies, however, one single round could last around four hectic minutes of highly competitive playtime. 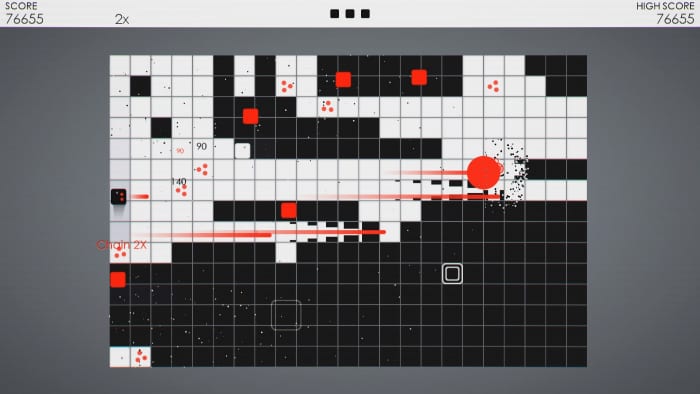 Behind me! Above me! OH LORD I’M SURROUNDED!

If online multiplayer isn’t an option for you or you simply wish to enjoy Inversus on your own, you can play the singleplayer Arcade mode, which can also be enjoyed with a friend instead of against them. The same general premise applies, yet here there are hostile red cubes closing in on your position that will make you lose a life upon touching you.

This gamemode can get so hectic that you may lose track of what’s going on from time to time, yet once you get the hang of it, you’ll find yourself saying “Just one more!” even after your sixth attempt. As time progresses, the red cubes move faster, become greater in number, and obtain power-ups like shields, which can also be found in multiplayer matches. White cubes will eventually join the on-screen chaos and will aim for you, potentially hitting you or closing you in if you’re not careful.

Hitting these opposing cubes causes them to explode, taking surrounding red cubes with them as well as leaving a small blast radius you can traverse. Time everything just right, from your location on the board to the ammo you still have in the chamber, and you can string together a combo of enemy explosions. When you’re cornered and there’s a dozen or so red cubes closing in on you, hitting the right one at the right time may set of a chain reaction that can turn the tide of battle in your favor, granting you an equal sense of victory and relief.

In truth, there’s simply not much bad to say about Inversus. It’s one of the most fun and frantic local multiplayer experiences in recent memory, although some may argue its $15 price tag is a bit heavy for the two gamemodes you ultimately get. Whatever the case, Inversus is ideal in short spurts and bound to leave you glued to your screen, especially when you have the option to enjoy this game with friends, either online or locally.