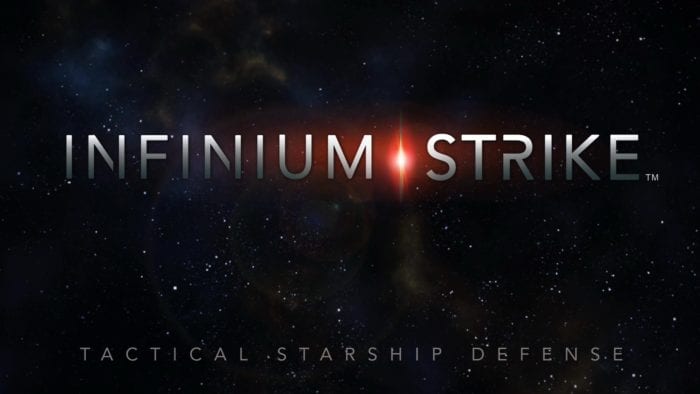 Many of us yearn to sit in the captain’s chair of our very own spaceship, traveling through galaxies doing battle with an alien menace while exploring unknown boundaries of the universe. Infinium Strike is a tower defense game developed by Codex Worlds that seeks to scratch this itch by giving the player access to humanity’s most powerful tool of destruction in an effort to survive against the seemingly infinite armadas of malicious alien attackers.

Infinium Strike takes place in the year 2170 after the human colonies have been destroyed by an alien species composed of living metal known as the Wrog. Naturally, you are the captain of mankind’s last hope for survival, the TSF Freedom Strike. This titanic death machine of a spaceship isn’t built from your standard space-age metals, but instead from a precious resource dubbed Infinium, which allows the ship to alter its shape in order to build and change its defenses for whatever situation you might run into. 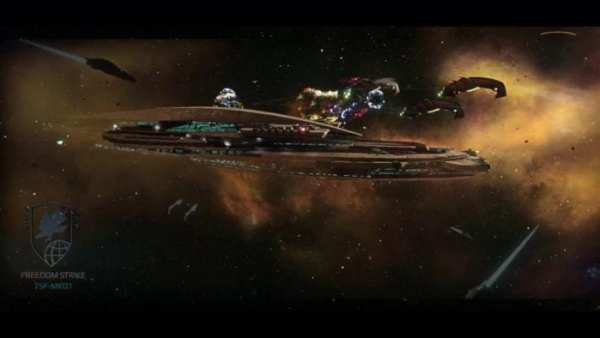 What little else there is of the game’s story and setting is told through a paragraph of dialogue before each mission and while slightly informative, it doesn’t really serve much of a purpose as the Wrog are about as faceless of an overarching foe as you can get. The Wrog’s motivation for attacking mankind isn’t ever really clear, which makes blowing them up them feel less like something vital to humanity’s survival and more like yelling at someone because they choose a different Pokemon GO team. Though I suppose both of those things can feel just as rewarding in their own way.

The visuals of Infinium Strike, while gorgeous at first, tend to taper off once you realize each mission takes place in the same abyssal plane of space and pits you against Wrog ships identical to the ones you’ve already fought. There are 3 difficulty modes for each of the 10 missions in Infinium Strike, essentially adding up to a total of 30 missions to complete. By about the fifth one, you’ve seen everything.

There isn’t a whole lot of progression in Infinium Strike, which tends to work both for and against it. Because you have access to just about everything early on, the game doesn’t slog through boring tutorials and is able to get directly into the action, however this also eliminates a feeling of being rewarded for completing missions outside of the ability to move onto the next. There are various aesthetic augmentations for your ship to unlock, but they aren’t obtainable until you’ve cleared a good chunk of the game already, degrading a lot of their value. 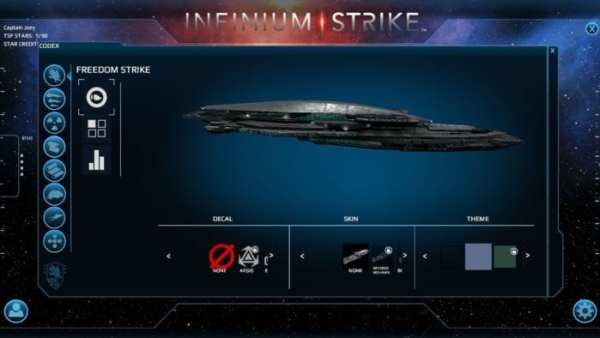 Infinium Strike’s tower defense gameplay is where it truly shines. In each mission, the Freedom Strike serves as the point you need to defend. Each of the four sides of the ship can be outfitted with various turrets designed to either destroy or subdue the attacking ships. Destroying the Wrog will give the player Infinium used to either build and upgrade turrets or to upgrade your entire ship, increasing your maximum turret capacity and restoring both shields and armor. Specific turrets are designed to attack specific Wrog ships, and since you have a limited turret capacity, what and when you build becomes incredibly important.

The game begins to stand on its own with the addition of the Freedom Strike’s Drone Fleet and SuperTech abilities. The Drone Fleet allows the player to create powerful spaceships using a secondary resource, fleet points, which accumulate over time. These ships will seek out and attack enemy ships, but only last for a designated amount of time. SuperTech is a series of abilities that become available the higher the level of the Freedom Strike. They include strong benefits such as double Infinium gain, completely restoring shields, and creating a decoy satellite to draw enemy attacks. Each ability has its own individual 90 second cooldown, so knowing when to use each is imperative to completing advanced missions. 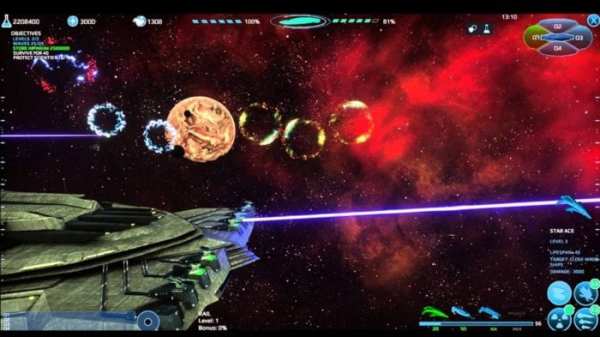 Missions in Infinium Strike go from zero to sixty very quickly and require the player to make some speedy decisions as there isn’t any way to pause the game. The game actually benefits from the inability to pause, because in a lot of ways much of what makes it fun is how close it can feel to a full real-time strategy game. Even though multiple resources to control, four different areas to defend, and a slew of turrets and abilities to use can feel pretty overwhelming at first, understanding the need for each one and making an on-the-fly strategy that leads to victory can feel pretty fantastic.

At its core, Infinium Strike is a game of learning, devising, and applying. And while the story is pretty laughable and 30 missions feels a bit too short, the gameplay definitely feels crisp and well thought out. If you do manage to burn through every mission, the game also comes with an endless arcade mode which can put up a challenge for even the most veteran strategy players. Innovative mechanics aren’t something the tower defense genre sees very often, so for Infinium Strike to add a bit of depth to a generally shallow style is certainly refreshing. Plus, Infinium is a less ridiculous word than Unobtainium, so there’s that.