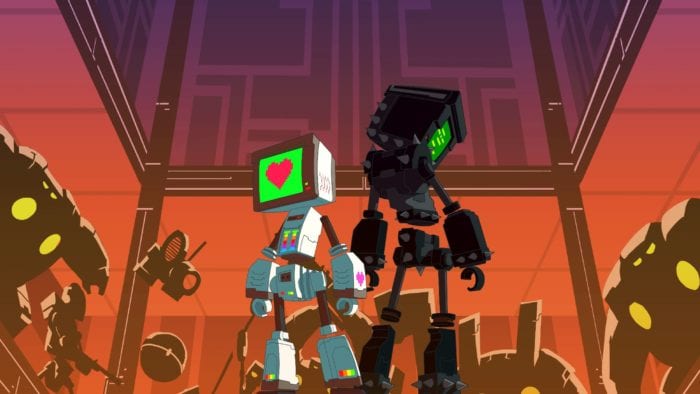 As someone who’s a sucker for titles like Devil May Cry and Enter the Gungeon, my heart skipped a beat when I first read about Heart&Slash, a retro-themed indie title that aims to combine hack-and-slash gameplay with punishing roguelike mechanics. While it’s most definitely an enjoyable title, the two aforementioned genres seem to clash more often than they work in conjunction, limiting the potential of what could have been a truly remarkable indie title.

Heart&Slash is set 100 years after robots wiped out the human race during an event called the Robolution and has you playing as the cutesy little robot called Heart, who’s goal is to escape the grasp of the Quality Assurance System AI (simply called QuAsSy in short) and find a way out of this evil robot factory. In all honesty, the story is quite forgettable, but the amount of personality Heart&Slash reflects with its retro visual style, killer soundtrack and varied character design more than makes up for that. In fact, throughout my playthrough, I kept coming back for the sense of nostalgia the game instilled in me rather than the actual story told.

He’s right behind me, isn’t he?

Most of your time playing will be spent fighting enemies across different levels, each split up into multiple rooms in which you can find a variety of offensive and defensive items, as well as some abilities. As with most roguelikes, this keeps Heart&Slash fresh on every playthrough, yet I found its hack-and-smash combat to be the most enjoyable part of the game compared to its roguelike elements. Just like in 2013’s Devil May Cry, you can toggle the weapon you’re using by holding down one of the bumpers. Considering how the game starts you off with a different combination of weapons each time you play, there are countless opportunities in terms of its combat. You can deal fast and swift strikes with a blade to finish off an enemy with a fiery downward thump, or you can deal massive damage by pummeling a robot up into the sky and beating him to scrap with a baseball bat. The possible combos are near endless, which make the lesser parts of Heart&Slash all the more surprising and disappointing.

There were multiple occasions where I entered a room, only to find myself stuck in an endless cycle of being pushed off the catwalk into the abyss below by flying, rocket-launching robots until I died, and when you die, you have to restart the entire floor. This goes to show how the difficulty of its procedural generation is largely based off of unfairness, which even had me turning off Heart&Slash altogether on multiple occasions. If you’re lucky, you pick up some sweet weaponry to relentlessly obliterate enemy robots, but if you’re not, you can find yourself in a less than favorable situation that will have you frowning and shaking your head in frustration. A higher difficulty curve is expected when playing a roguelike title, but when that difficulty comes forth from imbalance, it does take a large chunk of fun out of the experience.

You have the ability to upgrade weapons with scrap you’ve collected from fallen foes, but these upgrades feel useless for most of the items you come across in the game. Why would I upgrade a weak weapon when there’s the chance of finding a better one in another room? I often found myself spending scrap on regenerating my health rather than spending it on improving my character, and in a hack-and-slash game, there’s a certain sense of stability and progress the user wants to see. Not just progress based off of luck, but also progress regarding your own skill level, which is an itch Heart&Slash far too rarely scratches.

Stop picking on the little kids!

These flaws are what keep Heart&Slash from reaching its full potential. You’ll find yourself having a blast figuring out different combos on certain types of enemies depending on the weapons you have at your disposal, but when that isn’t the case, the fun you had makes way for frustration and reminds you that this game has its fair share of issues.

Heart&Slash is a bittersweet title where the amount of fun you’ll have with it depends on what you expect from it going in. If you crave a wide variety of enemies and weaponry spanning across randomly generated levels, then by all means, this title will grant you at least a few hours of fun. If you desire fun hack-and-slash combat that has you beating enemies to the ground with your sick set of moves, then Heart&Slash is still a viable game.

If, however, you expect the ideal balance between the roguelike and hack-and-slash genres, this game may leave you severely disappointed. You’ll often find yourself asking when it will reach its peak, when in truth, it never really will. This is most definitely a charming endeavor that can be improved and built upon in the form of sequels or similar projects, however. There’s plenty of good here that’s sadly held back by a variety of issues that don’t necessarily lie with its developers, but most likely within finding the ideal balance between the genres it embraces.