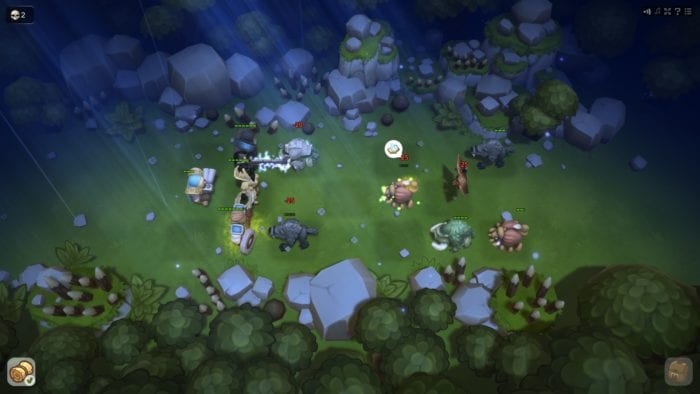 There’s something nice about a game that’s simple, straightforward, and easy to understand. Guards, a turn-based strategy title from indie dev Battlecruiser Games, absolutely nails this. With a minimal approach to most every aspect, this quick-to-play adventure is a unique twist on traditional turn-based RPG battle mechanics that makes players act, react, and plan out strategies in an all-new way.

Gameplay in Guards is, perhaps, almost too simplified for strategy fans. Players start each new run by choosing four heroes to make up their party from the selection of eight unique classes. At the onset, players will have access to only the first half of these: Peasant, Healer, Archer, and Witcher. Additional classes and upgrades must be purchased with the in-game currency, Mithrill. Once you’ve selected your party, it’s time to get to battling.

Guards’ battles are turn-based, with the player’s only direct action being to switch the position of any two heroes. The party forms a T-shape, with a three-unit front line and single rear unit. During play, all units in the front line are available to attack, while the party member in the back will rest to regain health. Moving any character from the rear to the front activates their power attack; for instance, the Healer’s healing spell, or the Archer’s rain of arrows that strike every foe.

Each stage of play in Guards is, essentially, a battle of attrition. Achieving victory is as simple as defeating enough enemies to clear the level, while a single hero’s death is enough to end your attempt. Perhaps the game’s weakest point is exposed here, because every new attempt follows the same path as the one before it. With no variation, the grinding aspect of trying to get and upgrade each hero ends up being repetitive, though mixing up your party can keep things interesting.

Guards’ second big problem is one of simple survivability. Since you’ve got four heroes on your roster at any given time, and only one option that’s actually capable of any meaningful healing powers, latter stages of the game become more about which hero you need to swap with your Healer than anything else. This limits the strategic aspect the deeper into each run you get. Battlecruiser attempts to address this with in-game items, but the results are mixed at best.

This isn’t to say that there’s no variance to the way Guards plays, of course. In addition to the selection of classes, upgrades can be purchased between levels, though the effects of these last only as long as the current journey. Still, the opportunity to beef up your party as they progress does offer a bit more variety, and becomes as much an important part of the overall strategic approach as any given level you encounter or action you take.

Ultimately, Guards embraces a design so simplistic that it feels as though it’s falling short of itself. The gameplay can be fun and challenging, but it also falls into a rut pretty quickly. Unlocking and upgrading all of the available heroes takes a considerable amount of time, with most of your time spent retreading the same roads over and over. It doesn’t feel like it’s got quite enough to rise to its $9.99 price on Steam, but drop that by $2-3 and you’ve got yourself a pretty solid deal.