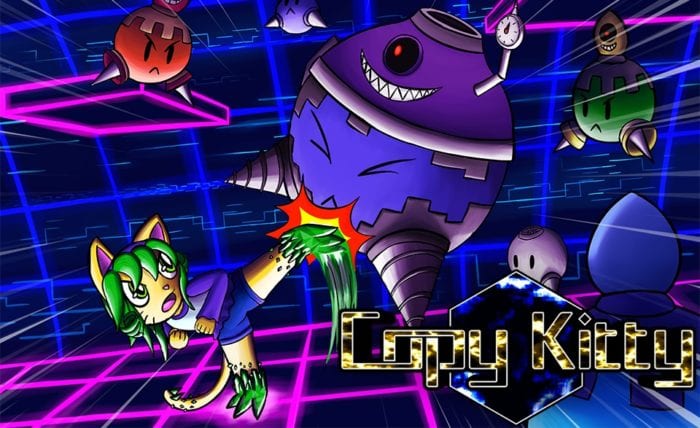 I do my best to try not to judge a book by its cover, or a game by its name. Still, when I first picked up Copy Kitty for this preview, I was expecting a cute, cat-themed puzzle game. Instead, what I found was a high-energy platforming adventure set in an intense simulation. The heroine of our story, Boki, is an anthropomorphic cat with a weapon-copying power and plenty of energy to battle against the game’s hordes of robotic baddies.

Copy Kitty diverts a bit from the standard “play the hero” path. Though Boki’s special power is certainly suited for combat, her self-doubt that stems from its reliance on others’ powers is at the front of her mind. To address that, her scientifically-minded uncle creates an intense training simulation that puts her powers to the test. Boki will have to take on scores of enemies in a number of dangerous environments in order to proceed.

The unique piece of Copy Kitty’s mechanics is, of course, Boki’s power. Her ability to collect and copy the attacks of her foes may sound an awful lot like classic gaming icons Mega Man or Kirby, but there’s more to it than this. Boki can hold up to three weapons at any given time, and the game allows players to switch via menu at any time. In addition, most weapons can be used in a combined “power shot” that combines the effects of some or all of her current arsenal.

Copy Kitty’s gameplay is a frantic, high-paced shooter with a ton of style. The variety of weapons included is pretty extensive, and many of them have flashy effects or unique uses. The short-range Whip is a great choice for high damage against larger enemies, while Explosion or Quick weapons can unleash devastating effects. Huge portions of each stage can be destroyed, too, so Boki’s quick movements, dodging, and double-jumping have plenty of use along the way.

It is worth mentioning that Copy Kitty, as an early access game, still has a few issues to be ironed out. I experienced quite a bit of in-game slowdown when using certain weapons, for instance, though it was much more common when combining powers. Those with more visual effects were, of course, the worst offenders, and it led to some difficulty going into some of the game’s busier areas. Even so, the controls still felt responsive and the game’s overall play was smooth.

As an action-first run-and-gun style game, Copy Kitty’s weakest point overall is probably the story. Brief scenes between stages fill in the simulated mission that Boki seeks to complete, and often include words of encouragement or advice from her uncle. The writing isn’t especially good, but it’s far from the worst I’ve seen from the indie games scene. Fortunately, the story isn’t the focus, and players are soon back to the action and ready to take down the next challenge.

With such little story to support it, Copy Kitty really does put the emphasis in all the right areas. Most stages have a decent amount of space to explore, and the game provides plenty of on-screen help to keep the player going in the right direction. Most stages are cleared by defeating certain “target” foes that Boki will need to track down. These target creatures are clearly marked on the screen, and light puzzle-style obstacles are common as players make their way through.

All told, Copy Kitty is a high-energy, fast-moving title with a unique and interesting twist. Boki’s powers certainly take some getting used to, and I do wish that there was a way to swap weapons on the fly without relying on a menu, but this is a relatively minor gripe. The game is fun, chaotic, and easy to pick up despite its surprising intricacy. Fans of old-school platformers like Mega Man and Contra will certainly find something worthwhile, and I look forward to the final release. For now, the game’s Early Access price of $9.99 on Steam is a solid buy-in that is easily worthwhile.