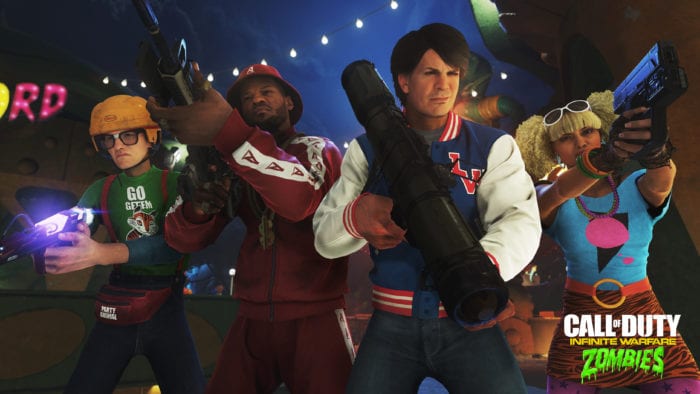 Last week, Infinity Ward unveiled their Zombie mode for the upcoming Call of Duty title, Infinite Warfare. Whereas previous games have used the mode as a grisly alternate universe telling of World War II (or, in Advanced Warfare’s case, put undead in super suits and called it a day), the new mode will take place inside a theme park as a film director places four 80s movie archetypes in a version of his upcoming movie titled “Zombies in Spaceland.” It has everything that one could want from such a concept: four very funny people (Seth Green, Ike Barinholtz, Sasheer Zamata, and Jay Pharaoh), two 80s icons (Pee-Wee Herman and David Hasselhoff), and more importantly, zombies with rocket legs.

Call of Duty and the undead have had a relationship since 2010, when Treyarch’s first Black Ops title rolled onto the scene with the unexpected mode. Players were put in the shoes of four characters in an alternate reality where the Nazis learned how to raise an undead horde and had to fight against them. To say it was well-received would be an understatement; many consider it to be the selling point for that game, and it was met with wide acclaim. Since then, the mode has been in every Treyarch developed CoD game, and while Infinity Ward previously tried to match that with the Extinction mode in 2013’s Ghosts, it just lacked the fun that Zombies did. The mode eventually became a part of the complete franchise with 2014’s Advanced Warfare. (They also had a pair of spinoff Zombie games for mobile systems, but neither were all that good and aren’t worth talking about.)

Now that all three sub-series of the overall Call of Duty brand have Zombie modes (it’s very doubtful that Advanced Warfare 2 isn’t in development, and whatever’s next for Treyarch will certainly include it), it’s time for a fourth sub-series completely devoted to them. Each version of the mode has been greatly received, even when the game it was packaged with didn’t receive the same reception, and it would help differentiate it from the other three franchises. By now, the complete CoD brands have all converged onto the “dark future,” just with their own different spin on it–Infinite Warfare has the entire cosmos, Advanced has super suits, and Black Ops had Detective Stabler. They tell “serious stories,” and you have to balance that out with some levity.

Enter: the zombies. With the exception of the Walking Dead, you can’t really make them anything but comical these days, so it’s best to just roll with it and go all out, as the upcoming Spaceland adventure is showing. Give us more zombies like the ones with the rocket legs; get a little crazy with it like Sunset Overdrive with its giant monster that spits out other monsters. The four leads, plus including famous 80s goofball David Hasselhoff, pretty much guarantees that Spaceland isn’t going to be a serious affair. Plus, given the four 80s archetypes that we’re working with here–athlete, nerd, valley girl, and rapper–it would be impossible to make a concept like this not funny.

If plot is that much of a big deal, well, Spaceland pretty much has the best plot imaginable for something like this. Make Pee-Wee Herman’s Willard Wyler the universe equivalent of Loki, luring people into his movies with promises of fame, only to pull the rug out from under them and unleash the undead. If there needs to be some sort of link between the WWII, 1980s, and aliens stories spread across Infinite, Advanced, and Black Ops, they could still use Herman’s character as a guy who dips his hand into other film genres. The 2010 Aliens vs. Predator game dabbled with the idea of three separate, but linked story campaigns, which this hypothetical game could roll with.

Call of Duty is known for its larger than life set pieces that defy all sorts of logic, and a full blown game about zombies would certainly elevate things to a new level. Having a nuke go off in your face and zero-gravity combat would be small potatoes when compared to something like riding down a roller coaster and gunning down hordes of the undead or using your future suit to blast zombies that also have future suits. The series has been around forever and needs to shake things up if it wants to avoid stagnation. At this point, blasting away the living dead has gotten to the point where they more than deserve the spotlight of their own.