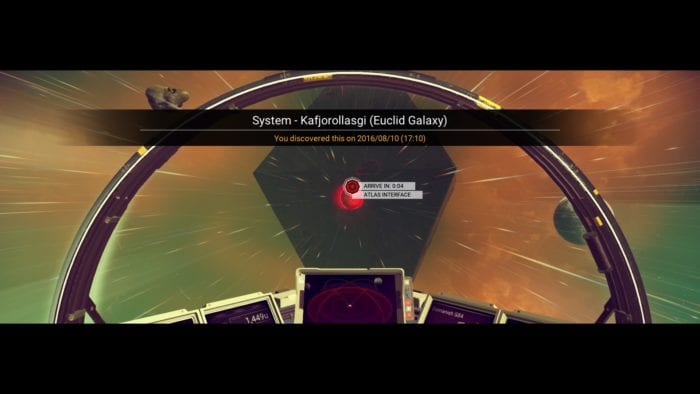 You know the Atlas? Apparently, they might be god-like entities that live in space. You recognize that diamond-shaped monolith thing on the box art of No Man’s Sky? That’s their symbol, and their space stations look like that.

At the beginning of the game, I was given a choice: either track down two other space explorers, or follow the Atlas. Intrigued by the idea of space gods/alien overlords, and the possible promise of knowledge and riches, of course I chose the Atlas. As I progressed through the game, I managed to come across a couple of smaller diamond-shaped monoliths and knowledge stones. These, I was told, were relics left behind by these strange beings.

Soon, I received a curious message that popped up at the bottom of my screen: Hear us. Find us. These beings wanted me to come to them. Oh boy.

I charge up my ship’s hyper drive and looked for the Atlas interface on my galactic map. It would take a few warp jumps, but I figured it’d be worth it. And once I made the journey, I was finally able to get a proper glimpse of these Atlas dudes and get an idea of what they’re all about.

Are they evil? Could they be space gods trying to take over humanity and the universe?

I’m only about 10 hours into the game, and I don’t have a lot of information on the Atlas yet, but I’m determined to follow them to the end. Also, I’ve been getting Atlas Stones, which are huge for helping me realize my dreams of becoming a space billionaire. Still, just from the Atlas stations, I’ve been getting some serious Mass Effect Reaper vibes from them, and it makes me uneasy.

Here’s a theory: maybe there’s a god in the center of the universe, and maybe the Atlas are trying to keep me away from the center and from discovering some sort of ‘truth’ by luring me over with their shiny stones and an ominous red orb that speaks words which sound an awful lot like brainwashing. No Man’s Sky is creepy enough with its desolate planets and f’ed up wildlife, but these beings have just added a whole new layer of terror to the game at this point.