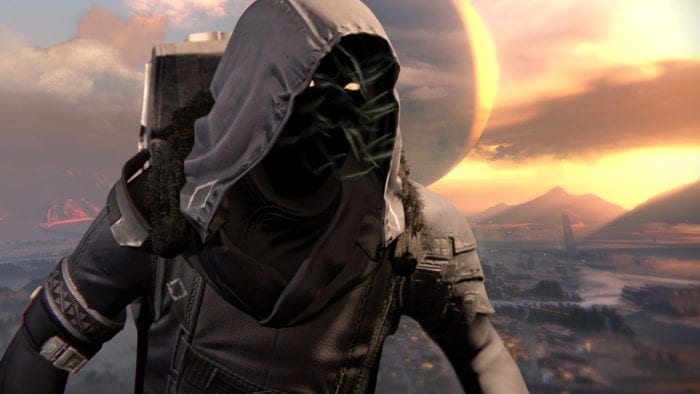 Xur is one of the few figures in Destiny that has been completely shrouded in mystery, as little is known about him or even those he serves. His presence to most players is known as “that guy who sell exotics,” which is a shame since it’s clear that there’s more going on behind the curtain. With Destiny 2 still some time away, one has to wonder what changes can be made to Xur, both mechanically and on a wider scale to help flesh this character out more. It’s clear that Bungie has no problem focusing on the lesser known characters since Rise of Iron is almost exclusively set around Lord Saladin.

The question is what could this mean for Xur in the next game? Certainly one of the stories that needs to be explored should revolve around this hooded figure, especially since the other vendors have received ample time in the spotlight. While they don’t have full expansions devoted to them, many of Destiny’s core vendors have some side missions built around fleshing out both their background and motivations. Yet Xur has always remained sidelined in this regard, but it’s understandable for the original game.

Xur is a cryptic character and lends Destiny’s world some interesting mythos and lore that could easily be built upon. However, if he is ignored in the next title this will be far more blatant than it is now. As a principle character to the Destiny community, going two whole games with only a set of tiny entries via the online Grimoire will not cut it. His world is one that deserves to be opened up to some capacity, even if it’s just a Nightfall or Strike.

While a full raid based around Xur could possibly be interesting, one has to wonder what that could even look like. It’s really never been touched upon if the various alien factions even know of Xur’s existence let alone who he serves. Outside of The Fallen just wanting to raid his vault of exotic items, Bungie would need to spend sufficient time building this character up for the players. We know that he is an “Agent of the IX,” but this is a concept that has never been fully explored. Yet, this isn’t the only thing that should change about him as some of his in game mechanics need slight adjustments.

We’re not going to sugarcoat this, Xur absolutely needs to sell Exotic Shards in the next game. Xur’s function in Destiny is to offer players a chance to purchase exotic items they might not have had any luck obtaining via end game activities. There’s a reason he appears every week with a new assortment of items and has one for each class, plus an actual engram if you feel the need to roll the dice. Yet, based on that purpose, Xurs lack of Exotic Shards is an alarming problem.

Exotic Shards are needed to level up an exotic class item via the infusing system, however, you can only obtain these rare items by dismantling exotics. This creates a scenario where you either have to dismantle exotics you currently own and may not want to for shards, or purchase exotics for the purpose of dismantling. Yes, the latter is technically just buying shards from him, but it seems like a needless endeavor. Especially since the prices for said exotic items would be much higher than shards, since you are purchasing equipment and not just raw materials. Though this is under the assumption that Bungie doesn’t drastically alter their loot system and change the consistency for how exotics drop.

In terms of actual exotics he brings, what would be interesting is if Bungie offered a fan voting system on their main website or in the game itself. Each week the community could vote for one of three items to join his weekly line-up. Though what gets voted on would need to be rotated, because if a certain item is defining the online meta, it certainly would be voted in every week.

Though all in all, Xur is a fairly balanced character and vendor in Destiny that mechanically only needs minor tweaks. His story leaves much to be desired, but we can only hope he is explored with more depth in the future. Especially if Bungie plans on keeping him around for the next game in this franchise.