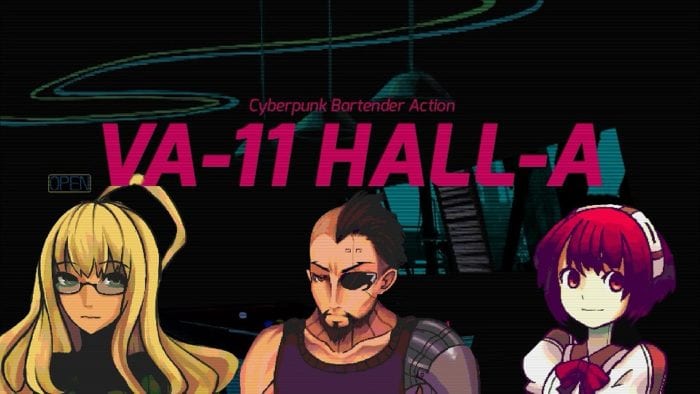 I always try to avoid judging a book by its cover, or a game by its title. That said, when I come across a name like VA-11 Hall-A: Cyberpunk Bartender Action, it’s tough not to at least pass a momentary judgment. Unsure of what I’d find in this bizarrely-named game, I considered doing some research before diving in for this review. I tend to find, though, that it’s best to let the game speak for itself, so I passed on the opportunity and went headlong into this interesting tale.

VA-11 Hall-A is a curious game. The intro lays out a pretty typical cyberpunk setting, complete with a neon-lit city ruled over by corrupt mega-corporations, augmented humans, and even fully-autonomous artificial intelligence. Unlike most games using this setting, though, VA-11 Hall-A isn’t about exploration or even taking down “the man”. Instead, players take on the role of Jill, a bartender at a seedy joint called VA-11 Hall-A, or Valhalla for short.

What stands out most about VA-11 Hall-A is that, really, the player has little control over the action. The game plays out more like a visual novel than anything else as the various clientele of Valhalla come and go, making conversation with Jill while they order and imbibe their drinks of choice. You won’t be presented dialogue options to change the course of the story, though your ability to mix and serve up the right booze plays a part in how things will unfold and how well your customers will tip.

At its core, VA-11 Hall-A is a game about a young woman struggling to make rent in an oppressive police-state. Each day begins with Jill spending some time on her cell phone before work, and once you’ve made it through your first night serving up beverages, this period also gives you a chance to spend some of your hard-earned cash on various trinkets that help keep Jill happy and focused on the task at hand.

The real meat of VA-11 Hall-A’s mechanics is, of course, mixing drinks. When a customer places an order, Jill’s trusty recipe book pops up. Players can browse recipes by name, type, or flavor in order to whip up the perfect concoction. Some clients are direct, while others leave some of the decision up to your trusty bartending instincts. Toss together the right amount of the five ingredients, toggle ice or age, and mix them up to keep the booze flowing and the customers happy!

Of course, VA-11 Hall-A wouldn’t do to simply have players mixing drinks without anything else to look forward to. The game’s story is actually pretty compelling, though somewhat abstract in its telling. Since Jill only catches what comes across on her smartphone’s news apps and what Valhalla’s customers share, the plot comes through in fragments and rumors, with each night adding more to the overall story and feeding the player’s curiosity about the hacker called Alice_Rabbit.

VA-11 Hall-A isn’t a game for everyone, and that’s fine. The simple mechanics, pixel-heavy look, and not-so-interactive story aren’t supposed to cater to every audience. If you’re a fan of story-first games with a minimal challenge and simple gameplay, it’s a great experience. Sukeban Games has done a wonderful job of creating a cast of interesting characters, each with their own perspectives and motivations. For those of you in search of a rewarding story experience that’s unlike anything you’ve played, VA-11 Hall-A may just be exactly what you’re looking for.