Back in the late 2000s, Capcom tried to bring their 2D series Bionic Commando back into the spotlight with two games. Along with the sidescroller Rearmed, there was also the gritty reboot that turned the series into an action title, and protagonist Nathan “RAD” Spencer into a prisoner for the government. After Ascension City is bombed, he’s given his arm back and thrown into the ruins so he can redeem his name and stop the invading BioReign terrorists, in exchange for information on his missing wife.

That’s when it gets weird. See, turns out that his wife never actually left–she’s a part of Nathan’s arm. It’s some whole thing about how bionics need to sync with their hosts on a physical and emotional level, and she was perfect for that. Basically, you know the whole Drift Compatible thing in Pacific Rim? It’s like that, if it was completely batshit.

Video games have a very weird relationship with sex. If you’ve ever seen sex scenes in a video game, it’s like watching two Barbie dolls being awkwardly smashed together, which is weird enough. The Witcher 3 takes that to a whole new level by letting you bone on top of a stuffed unicorn. (Glitter does not come with the unicorn.)

In a flashback, Geralt of Rivia and his love Yennefer of Vengerberg are having a night of passion…which also includes a stuffed unicorn that she has for reasons that aren’t explained and was crazy expensive. In any case, she and Geralt have sex on top of it, because YOLO. Hopefully they cleaned that thing extensively.

The Diablo games have had some weird stuff in them; Diablo 2 had a secret level full of cows that you could fight. It stands to reason that the sequel would follow the same format, only Diablo 3 kicks that up a notch with a level full of ponies and teddy bears.

It’s a crazy bright level (like Lisa Frank threw up on Castlevania concept art), but before you get there, you have to find rare parts to make a certain staff. Plus, you have to find a ghost of a cow king. Seriously. Nothing quite like murdering bad guys on looseleaf paper and getting blood splatters all over it, right? Plus, magical cheeseburgers! 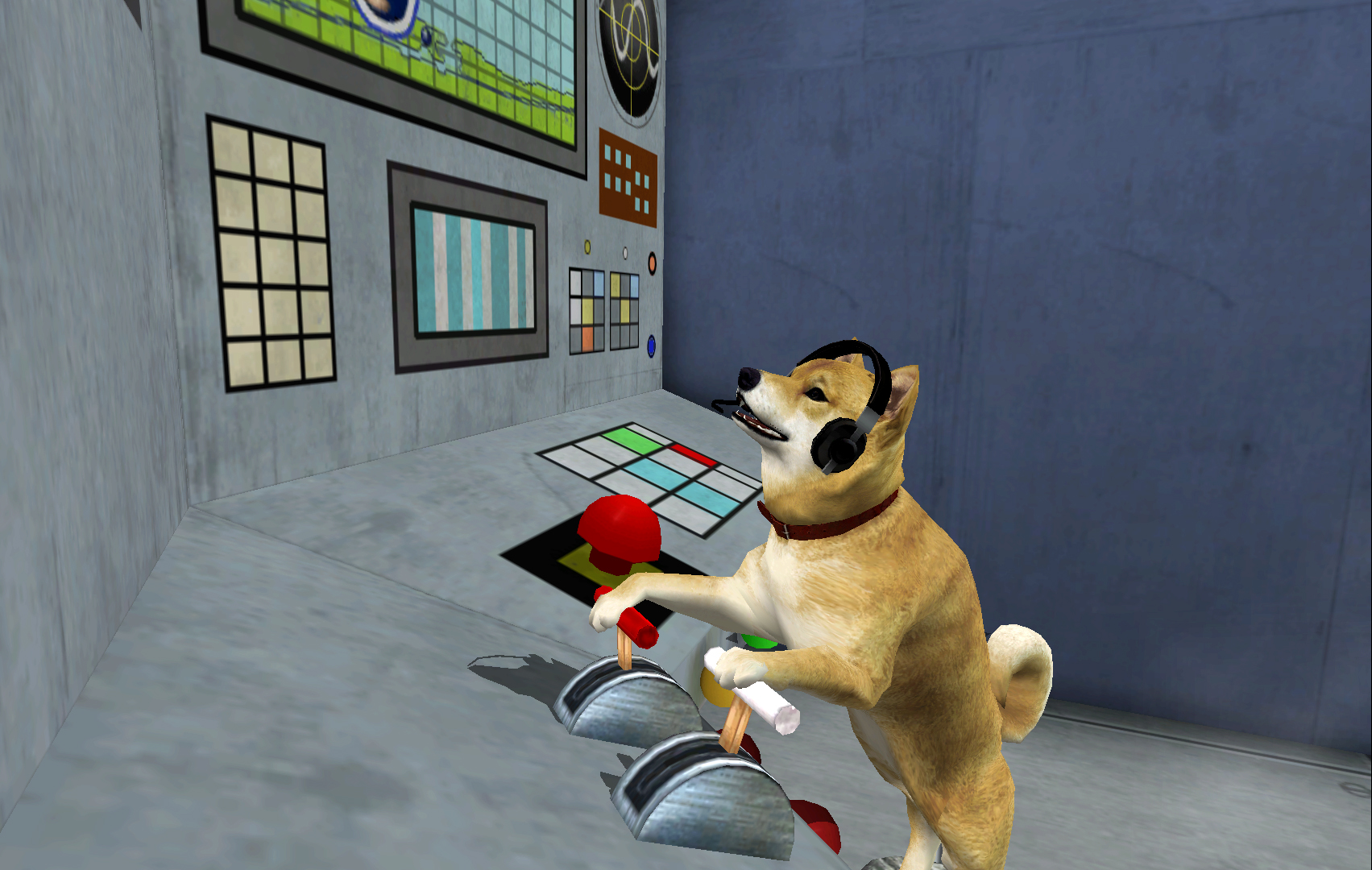 Silent Hill 2 is one of the best video games of all time, and possibly the scariest game of all time. It’s an incredibly serious title, but sometimes, you need a little comedy in your horror. To wit, there are six ending for the game, and while Konami has gone on record as saying that all six are equally canon, two of them can only be considered canon if you were being silly.

At the end of the game, protagonist James Sunderland can discover that everything he went through in the game was at the hands of a dog. A cute, furry little dog! And to make things worse, the furry bastard just comes over and licks your face. Diabolical!

The most recent Devil May Cry title may have been knocked by hardcore fans, but there’s no denying that the game has some great visual design. Nowhere is that more apparent than during the last act of the game, where you travel to a nightclub that’s a front for Mundus’ mistress, Lilith. After some dance based combat, you finally go up against the mother to be.

You may be thinking that it would be unfair for you to beat up a pregnant woman, but it turns out that her little spawn isn’t quite so little. In fact, it towers mightily over you and can crush you with its giant fingers, all while mommy dearest is hanging around in its belly button. And you have to yank her out using your angel grappling hook. Yeah…it’s pretty creepy, especially when you have to watch it push her back in its stomach. Ugh, can the mind vomit? 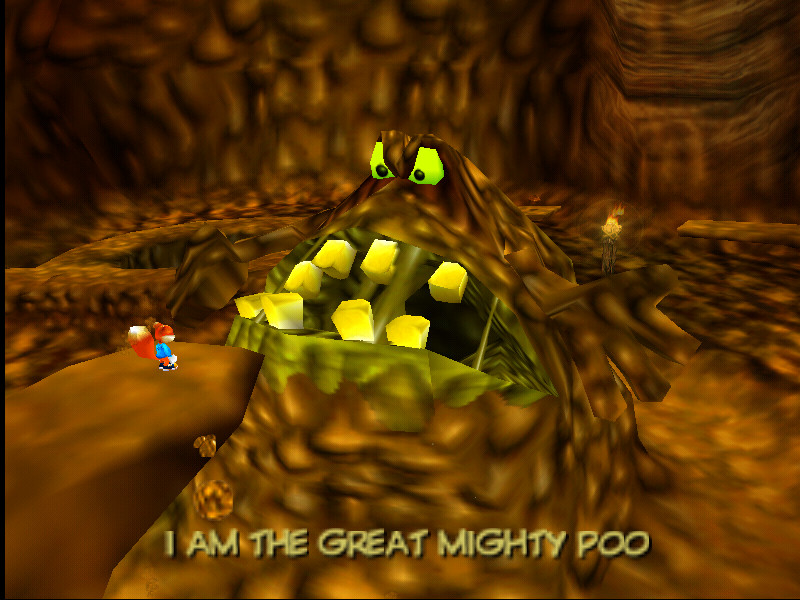 There are many moments in gaming where you have to go to someone, “Can you believe this shit?” In the case of Conker, that’s got two meanings. For Bad Fur Day, the lovely folks at Rare decided that what we really needed was a squirrel going up against a giant poo monster.

Dubbed the “Great, Mighty Poo,” our titular hero fights this opera-singing, sweet corn-loving freak of nature in the Sloprano chapter. True to his (its?) nature, the one weakness is toilet paper, which you have to throw into his mouth. It’s all completely mental, from the singing right down to the way the music is implemented into the boss battle. There are a lot of things that stick with you, and this will certainly be one of them. It’s one thing to see a living turd like on South Park, but it’s another thing to fight a living turd that has the pipes of Luciano Pavarotti.

In the second mission of the extra content, the President and Kenzie head the S&M club to find the evil villain. While your resident genius is dressed in her superhero attire, you show up in a gimp suit (mask and nipple spikes included) in order to blend in. Kinzie doesn’t dress up because people know her, apparently. You go to speak to her sub named Dom, who sits on a throne made of…marital aids, and he wants you to use your telekinesis to round up his furries. There’s also gimp murdering (dildo bat is optional, but c’mon, you kinda have to in this scenario) and rickshaw races. Yeah…this is some really weird DLC.

There doesn’t need to be a thesis statement for this; someone at Square Enix decided that for Final Fantasy 7, hero Cloud Strife needed to dress like a stripper while finding a dastardly villain partial to sex workers. To catch this villain, he had to dress sexily, using some “sexy cologne”, a diamond tiara, and a wig to complete the ensemble. He didn’t have time for his hair because you have to book appointments for that shit months in advance.

It’s incredibly weird, made even weirder by the fact that it’s so obviously him under that getup. Sure, he kinda makes it work with the heels, but it’s not like he’s being subtle about his mission there, and he’s not very convincing as someone on the job. Maybe that’ll change if that scene returns for the PS4 remaster, otherwise, he should definitely stick to his day job.

The Metal Gear series is no stranger to weird stuff, because Hideo Kojima is a weird dude. While Metal Gear Rising doesn’t have anything to do with him, that doesn’t stop it from being immune to his touch of weird. Sure, Raiden is a cool cyborg ninja capable of some bomb ass break dancing, but he also takes time to fight the guy who wants to be Commander in Chief.

See, Senator Armstrong has connections to various mercenary companies in the world and hates the war economy. His big plan was to kill the president, become the president, and end the war economy while also having a survival of the fittest society. People would fight and die for what they believed in instead of being forced to. But that’s not where it gets weird; the true crazy comes from when he augments himself with nanomachines and you have to kill his super jacked form. Is it crazy? Yes. But it’s also really freaking awesome.

Look, there’s just no getting around this: Sonic 2006 is a bad game, possibly the start of the trend of bad Sonic games, and really bad in general. It’s also really weird, both in terms of its existence and mechanics and most notably in its story. The typical Chaos Emerald stuff is in there, but then there’s also time travel, harnessing god power, and clones.

The weirdest of all of that stuff is the romance between princess Elise and our titular character. Not only is it just plain badly written and incredibly weird, it’s just freaking creepy. There’s been a lot of weird nonsense in the Sonic games, but nothing quite as ridiculous as true love equating to Elise kissing Sonic and unlocking his Super Saiyan form. If you thought the whole thing between Master Chief and Cortana was disturbing, this brings it to a new level.