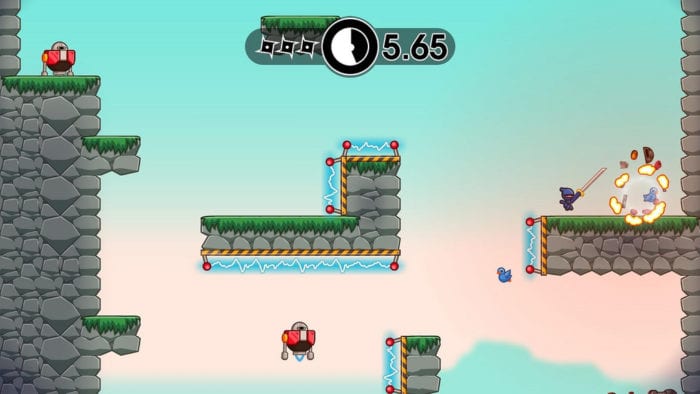 10 Second Ninja X is a speedrunner’s paradise. It’s a game that respects the player’s time while constantly challenging them to do better. There’s nothing incredibly new or exciting here, but some great level design and pixel-perfect controls make it an exciting exercise in patience and precision.

10 Second Ninja X’s title really says it all. You’re a ninja who has to destroy every robot in the level, and has 10 seconds to do so. The game does sport a simple story intermittently told between level unlocks, but it’s mostly a brief distraction from the meat of the game.

Nowadays, it’s rare that a platformer feels better with the d-pad than analog sticks, but 10 Second Ninja X is the kind of game that begs that extra degree of precision. Each of  the game’s 100 levels feels significantly different than the last. It can be hard to see it at first, since your objective never really changes throughout, but the real game is in the pursuit of the coveted three-star rank.

Instant restarting and a constant reminder of your speed means that you’ll find yourself playing a level upwards of 50 times to cut down fractions of a second. Even though beating a stage in only 10 seconds or less can be enough of a challenge at times, each stage has established times that net you one, two, or three stars. A score of two stars is immediately followed by a reminder of how much time you need to shave off to get to three.

But getting three stars never feels inherently required. 10 Second Ninja X follows the progression model of “X number of stars unlocks the next world of levels.” Often I would only be halfway through one world before I had enough stars to unlock the next. The games straddles a fine line between encouraging skillful play and keeping it fun for more casual players.

There is plenty of fun to be had for those not worrying about time perfection, but the real magic is in a blend of the two. Every world introduces a new wrinkle to the formula that requires additional calculation and planning to pull off. These new obstacles come in the form of robots that can only be shurikened or slashed, switches that open new pathways, or lasers that deflect shurikens backwards. This leads to a lot of time spent panning the camera up and down the stage in careful study of the layout, especially in later worlds, where the game throws out levels that incorporate all of these twists in one.

In the end, you want to find the very best route for a stage. Jump here, shuriken there to take out three enemies, flip the switch that propels you forward, slash slash and done. It’s all worth it when three triumphant stars emblazon the screen. And that’s a big deal, because it’s only then that you really feel like you’ve mastered the stage; you’ve done it as fast as possible with the 10 seconds you’re given, and it’s supremely satisfying. The competition can become even more granular if you pay mind to the game’s leaderboards, which measure top times down to the hundredths of a second.

But sometimes, a level is just too much of a head scratcher to figure out the fastest path, so the game’s hint system is pretty handy. You can cash in a hint token during any level to see a ghost ninja run the fastest path. What’s important is that the ghost tells you where and when to go, but the execution is still up to the player, and that can be just as tough as the brainstorming. 10 Second Ninja X demands some serious platforming skill, especially when timing shuriken throws. You can earn additional hint tokens by playing a short mini game outside out of levels, which is a nice little detail that doesn’t punish the players for using hints or ask for additional money to do so.

10 Second Ninja X is best described as a fantastic podcast game. That is to say, it’s the perfect game to play while you might be doing other things, like watching a show or listening to music. It can be plenty of fun to burn through a few levels casually, but the real joy (and tears) comes from shaving those seconds down to an oh-so-fine three star perfection. If tight controls, some clever level design, and a level count well worth the game’s asking price sound like a good time, then this is easy to recommend.