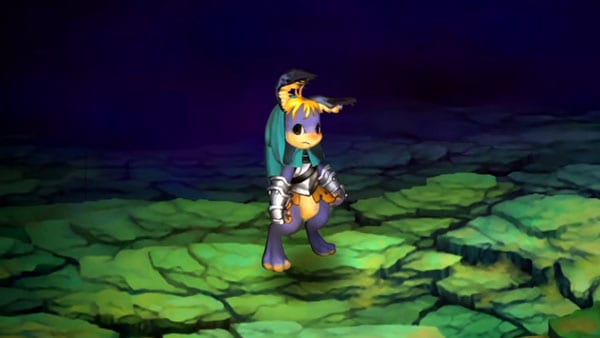 Cornelius is the second character you’ll get to play as in Odin Sphere Leifthrasir. He’s the prince of Titania and he also happens to be in love with Velvet, the princess of the fallen kingdom of Valentine. However, he soon gets turned into a Pooka and embarks on a journey to revert to his original self.

Cornelius wields a bright blue Psypher sword, and he’s also the swiftest character in the game. He can slide past his enemies very easily, backstabbing them, and execute quick strikes with the sword.

The first skill you’ll unlock for Cornelius is Spiral Claw. This allows him to perform a forward spin dash with the sword extended, and you can move up or down while using it. Spiral Claw will work well on groups of enemies, as you can quickly charge through them while dealing damage. This also allows you to get past them, dealing back damage. You can also use this skill against large bosses. Spiral Claw won’t allow you to get past bosses, but you can continuously deal damage to them by moving up or down while performing this skill. The continuous damage should let you stagger most bosses.

Whirling Blade is another great skill that Cornelius can use for crowd control. While it doesn’t work that well on bosses, it will let you clear out groups of enemies surrounding you. Cornelius can trap enemies in his whirlwind, and even move left and right to hit anyone who might be out of his reach.

If you’d prefer to use Cornelius’ magical skills, I recommend investing points into Spark Bolt and Plasma Circle. Spark Bolt is great for stunning regular enemies with an electric shot, and Plasma Circle will zone your foes by surrounding your body with multiple shots. Later on in the game, you’ll also unlock Mega Spark, which allows Cornelius to release a powerful, charged electric shot. I didn’t find his lightning magic to be very useful against bosses, but it is extremely handy when dealing with mobs.

As with all your characters in Odin Sphere Leifthrasir, make sure to get Recovery Up, Charge Up, and Power Supply to keep you POW and HP up. Infiltrate is also a good ability to have when Cornelius is low on HP. This lets him slip past all foes while dodging when your HP is 30% or lower – perfect for getting straight to a Rest Area, or healing up when you need to.

Ground Force and Backstab are also very useful abilities for Cornelius. Ground Force increases your ground damage by 10%, and Backstab increases your damage dealt by 20% when attacking from behind. Since Cornelius is a character that specializes in slipping past foes and getting by them, Backstab will be invaluable for him. It’s also worth investing into the Parry ability if you enjoy blocking enemy attacks. With this ability, simply press forward after guarding an attack, and Cornelius will perform a good counterattack.