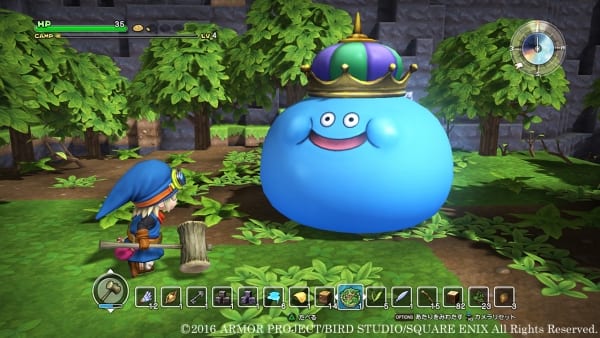 Dragon Quest Builders is essentially the perfect game for introducing new fans to the world of Dragon Quest, its enemies, and the lore. The game starts you off as a nameless character who doesn’t know or remember what he’s doing in this world. A disembodied voice tells him that it’s his job to bring hope back to this world. However, your character isn’t having any of that, and is more interested in building up a home for himself.

In terms of gameplay, Dragon Quest is basically the Japanese version of Minecraft. You craft healing items for yourself, you hit the earth with a sword to get dirt cubes, and you can use the cubes to create new paths and structures for yourself. In the demo I checked out, the opening level was very reminiscent of Minecraft because of the grassy lands, water, and the overall nature in general. It’s populated with familiar Dragon Quest enemies, including the series’ iconic blue slime. Obviously, combat isn’t the focus here, but swinging your sword at enemies can feel a tad imprecise, and it can be a little tough to judge the distance between yourself and your foes.

The demo guided me through a series of objectives where I had to craft basic amenities for my new home. Dragon Quest Builders also introduces companions that can join you in your base and give you tasks as well. I had a female companion run up to my base and she tasked me to build a couple of beds and a torch. All the while, the game’s disembodied voice continued to tell my character about how it was his destiny to rebuild this broken land and to restore it by creating furniture and new structures.

Dragon Quest Builders is open world, and you’re free to travel anywhere you want and fight whatever enemies you see. However, it’s also worth noting that the game is broken up into multiple chapters. The demo didn’t let me get far enough into the game to see what I needed to do to progress in the story, but I suspect you’ll have to complete certain tasks or build items requested by the disembodied voice.

A Square Enix rep told me that while you can travel around the world building your houses and hunting down rare materials, Dragon Quest Builders will place a large focus on its story too. Think of it as a Minecraft JRPG where you can let your building imagination run free while trying to save the world on the side. The third-person camera works wonderfully too; it’s great to be able to see all around you and know exactly how your structures look like before placing your blocks.

While it certainly won’t allow the same degree of creativity and freedom as Minecraft does, Dragon Quest Builders has its charms, and it’ll be interesting to see how the game incorporates a story with this style of gameplay.