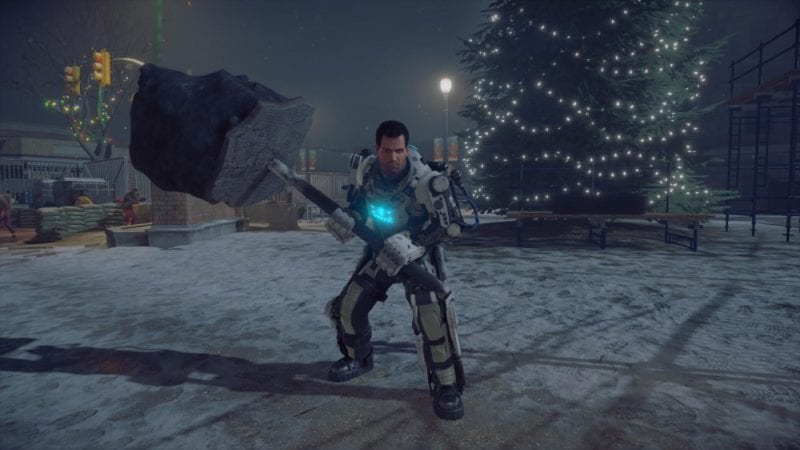 The Dead Rising series has always been about throwing you into ridiculously huge crowds of zombies and letting you loose with a huge arsenal of weaponry. After getting hands-on with the game today, I can safely say that Dead Rising 4 only takes this mechanic and runs with it further than any other game in the series.

Little has been said about Dead Rising 4’s story, other than we’ll be getting one pretty big trip down memory lane. During my hands-on time with Dead Rising 4, I was back in Willamette, Colorado with Frank West at the heart of the action. It turns out that regardless of the 16 years that have passed since the first game, Willamette’s zombie problem doesn’t seem to have improved much at all.

As the demo loaded, I was placed in the middle of a road that could not be seen. Instead, a sea of zombies filled the street, just waiting to be completely obliterated with whatever weapon I could get my hands on. An open sandbox for zombie destruction was essentially what this demo was. There was no mission I had to complete, just a butt load of zombies baying for my blood. In order to combat the zombie hordes, I was given three different weapon types that were easy to switch between- melee, long-range, and throwable.

Unlike in previous games where you would only have one weapon at your disposal at any time, here I was able to quickly switch between a bunch of weapons quickly with the press of a corresponding button. It may not seem like such a big deal, but when I was after a bit of explosive firepower that my axe wasn’t offering me and 200 zombies stood in my way, it was a godsend. Unfortunately, switching between weapons and using them was still a pretty clunky affair, and when under pressure from huge waves of zombies, both actions didn’t offer the speedy switch that was necessary to avoid taking damage.

Regardless, Dead Rising 4 is definitely fun, and as I navigated my way through the giant horde of zombies to the purple marker pinpointing the location of a mech suit, my combo meter filled. There I was, surrounded by zombies and with the press of a quick Y + B button combo, Frank raised his axe into the air and fried the enemies in his nearby vicinity using his handheld weapon as a conductor for lightning. Another combo saw me rip a zombie’s head clean off its body, a little less effective, but just as satisfying.

Equipping the mech suit not only granted me with additional attack power that allowed me to turn zombies into indistinguishable red pulp, but also the power to wield huge miniguns and rip parking meters out of the ground. Ultimately, my imagination and the amount of time I had with the game were the limitations to just what I could do with the environment around me. Fans of Dead Rising should be excited for this upcoming entry as it offers more of the same insane, off-the-wall zombie-killing that is commonly associated with the series. Frank is back.