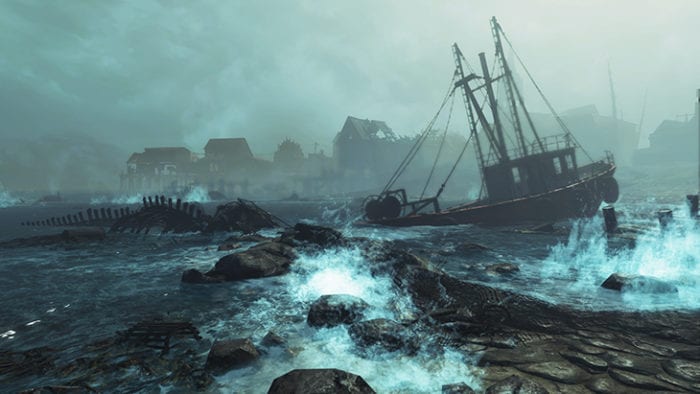 When Bethesda said that Fallout 4’s new expansion, Far Harbor, was going to be big, they weren’t joking. The new island is absolutely massive. But sometimes seeing the size just doesn’t make things clear enough. So, to give you a better understanding of just how large Far Harbor truly is, we decided to cross the new land mass and see how long it took us. As it turns out, much longer than expected.

We crossed the coastal island twice. Once going East to West, and second time going from North to South. Just to get a feel for our trip, I wore a suit of Power Armor to bypass threats, and only sprinted when I was taken off course. Other than that, my journey was just moving forward with the analog stick, a light jog by movement standards.

The first trip took my character from Far Harbor (the first town you hit), to the western edge pictured below:

It was a sort of diagonal path, and there were a lot of obstacles, but going from East to West took roughly 30 minutes. This included a bit of sprinting when to regroup after getting pushed off the path. Still, that’s a long time to get from point A to point B without stopping.

The second trip was slightly shorter. The most direct path took me from Dalton Farm on the northern-most tip of the island, down to Brooke’s Head Lighthouse on the southern tip. Due to the smaller amount of water obstacles in this direction, it took me under 25 minutes to make the trip.

What the developers accomplished is impressive. My journeys were filled with beautiful sights, and horrifying creatures (curse those Fog Crawlers). But, most importantly, they sure kept their word in providing a true expansion to Fallout 4.