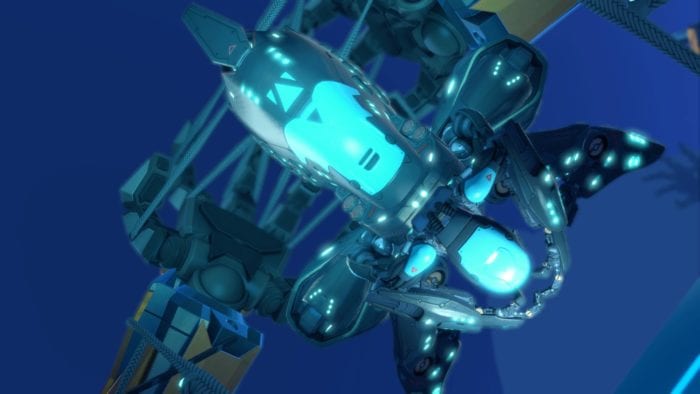 One of the first big bosses you’ll face in Battelborn shows his face in the middle of Episode 1: The Algorithm. He’s a bit peculiar, as he believes he’s a living spider, and would like for you to fight him as one. While he may bring a few laughs, though, you’re here to see how to kill the bumbling idiot.

He’s a bit of a wild card, but you should be fine solo regardless of who you use. What’s most important is paying attention to the battlefield at all times, as Geoff likes to scatter traps, weapons, and minions. He himself is really slow, so running around shouldn’t be a big deal, but that doesn’t mean he’s a pushover.

For Gear, you’ll want something that helps with armor recharging. At times there is a lot going on during the boss fight, so making sure you’re not at death’s door is only going to help you in the long run.

The last thing to keep in mind before we get into the details of the fight is to keep close. It may seem counter-intuitive but, as we’ve stated already, Geoff is pretty slow. Staying close by for the most part keeps you from falling into his line of sight.

As mentioned before, Geoff is considerably slow, but that doesn’t mean he doesn’t pose a threat. He relies on his jumps and powerful ranged attacks to take you down throughout the fight. For this reason, it’s best to hug one of his sides, to turn with him and keep your attack going. Be aware that once in a while he will turn the ground beneath him red. When this happens, run. Geoff will do massive damage and stun you, and nobody wants that.

As you do damage, the boss will add one new attack to his repertoire. A bunch of red webs will dot the map, and if you stand on one, you’re trapped for about five seconds. That may not sound like much, but it’s more than enough time for you to be killed in battle, especially when the explosive bots come into play. After taking off 25% of his health during this phase, Geoff will run inside.

This next phase is a repeated one, so we’ll give you the gist once so you can repeat it throughout the fight. Inside of the building he runs into (a different one every time), there are switches. You must activate all of the switches to release the pesticides that will force him out of hiding. Leave the switch closest to the exit for last so you have ample time to get out of the poison gas. Geoff will try to shoot you, use his lack of speed to your advantage and start behind him to get him to face away from the switches.

When back outside continue the fight as normal, sticking close and getting away when the ground turns red. When the boss is at about 30% health, he will start to summon powerful turrets, make sure to take these out. While the minions aren’t much of a headache, these turrets will end you with no problem.

Rinse and repeat until victory is achieved.

For more guides, tip, tricks, and information on Battleborn, be sure to check out our wiki.