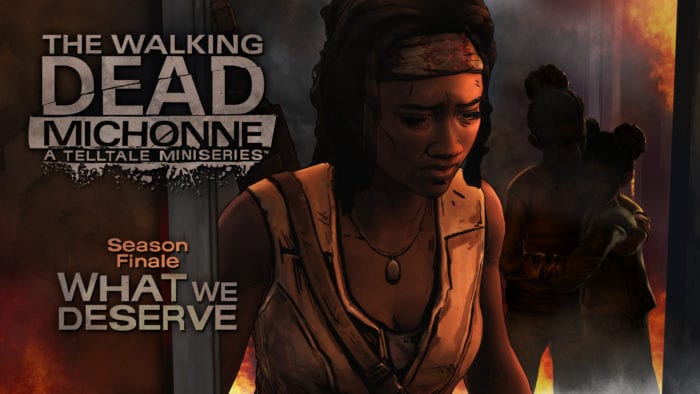 Though the road has been anything but easy for our sword-wielding heroine, one way or another The Walking Dead: Michonne is coming to a close next week, April 26.

As Michonne continues to struggle with all of the choices she’s made in her life, the consequences will finally come back to haunt her. Titled ‘What We Deserve,’ the third and final episode of the Telltale mini-series will revolve around the inevitable confrontation between Michonne and the Monroe group. Desperately trying to protect the family she came across in the previous episode, all of Michonne’s decisions have led to this.

Curious how the averages fell for episode 2, or just need a quick refresher? Check out the Episode 2 Your Choices trailer below.

Telltale also released a number of screenshots for the next episode. Needless to say, it looks like chaos and a fair bit of violence are on the horizon. The Walking Dead Michonne Episode 3 will release for PC/Mac, PS4, PS3, Xbox One, Xbox 360, and mobile April 26.

Are you excited for episode 3, What We Deserve? Or are you still a little scarred by the ending of episode 2. Either way, sound off in the comments.