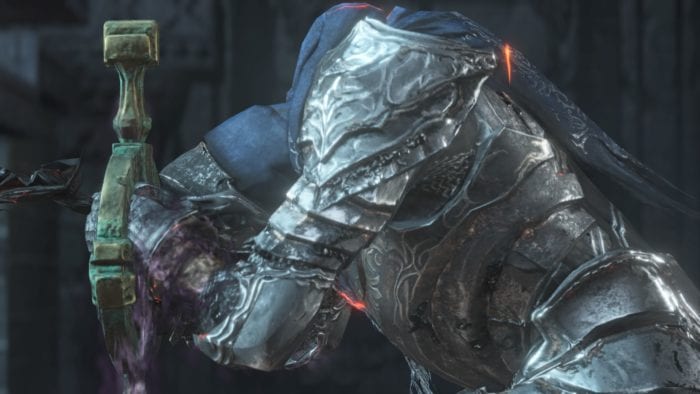 This article will contain very major spoilers for an NPC’s questline in Dark Souls III. Avert your eyes if you don’t want to be spoiled. Read our review instead.

Depending on the gender of your character, Anri of Astora in Dark Souls III will be either male or female. My main encounters with Anri occurred with a male character, so for the purposes of this article, I’ll be referring to Anri as a female. She reminded me quite a bit of Solaire when I first encountered her on my blind run – they were both from Astora, and both friendly enough to offer their sword in jolly co-operation. I messed up her questline rather egregiously during my first run, but when I started New Game +, I decided that I wanted to see her story through to the end.

When you first meet Anri, you see her resting near the bonfire at the Road of Sacrifices with her traveling companion, Horace. He isn’t very talkative, but Anri reassures you that he’s a standup guy. He’s such a stalwart dude that she thinks she would’ve given up on her journey long ago had he not been by her side. Both you and Anri are after the same thing: to defeat the Lords of Cinder and rekindle the flame. To that end, you’ll run into her and Horace a few more times during your journey.

Dark Souls fans are no strangers to NPCs with tragic backstories and outcomes. Laurentius from the first game comes to mind. All he wants is to become a great pyromancer, and he’s so sincere when teaching you his pyromancies. Unfortunately though, he ultimately goes insane and hollow after being unable to locate Quelana in Blighttown. Quelana herself is a pretty tragic NPC too, and so is her sister, the Fair Lady. So what is it about Anri of Astora that makes her stand out?

Well, for starters, you can marry her. After finding out from the community that your character could actually get married in Dark Souls III, I’ll admit I was a little put off by the idea. The world of Dark Souls is notoriously bleak, and a happy marriage in a game like that would feel too out of place. Surely the game would try to mess with the player by forcing you to marry some monstrous abomination or something like that. But no, you can actually marry Anri. I had become quite attached to Anri as a character by this point, so naturally I was elated.

Before you can marry Anri, first you have to acquire the Dark Sigil and speak with another NPC named Yuria. She informs you that you’re to become the Lord of Hollows and usurp the flame. But of course, any proper monarch must take a spouse. Yuria then tells you that Anri is the perfect spouse for you because she too is undergoing the hollowing process. After speaking to Anri during key points of the story and keeping Yuria happy, she’ll soon inform you that the marital preparations are done.

“Good tidings,” Yuria tells you. Your betrothed is ready for marriage, and you’ll find that everything has been set up and is waiting for you at Darkmoon Tomb. Ah okay, sounds goo- wait a minute, Darkmoon Tomb? Odd place for a wedding, no? But Yuria shakes off your doubts and tells you reassuringly to go get married. Well, alright. Anri and I are pretty tight at this point. As long as I’m marrying an NPC as virtuous and morally upright as Anri, I’m sure everything will sort itself out eventually.

When you reach Darkmoon Tomb, you find a pilgrim waiting for you just outside. She hands you a ceremonial sword and tells you to go forth. Hmm okay. I’ve never gotten married myself, but I’m pretty sure you need a ring, not a sword. But hey, it’s Dark Souls. Anything goes. So my character heads into Darkmoon Tomb and sees… this.

Anri. Lying there. With a cloth over her face. Dead.

I hit the button prompt and a cutscene plays. My character kneels before Anri’s body, holds up the ceremonial sword, and then plunges it into her face. And that’s it. You’re married. Congratulations.

Honestly, I don’t know what I was expecting from a Dark Souls III marriage, but that whole scene was probably one of the most disturbing things I’d ever seen in a Souls game. The setting and ambiance of Darkmoon Tomb, the unfeeling coldness of my character as he stabbed the sword into Anri’s face, and the unsettling cheeriness of Yuria and the pilgrim as they urged me to get married – it was all a bit horrific.

Perhaps the saddest part about this whole ordeal is that there’s really no happy ending for Anri. If you tell her of Horace’s location after they get separated in the Catacombs, she goes down to find him, only to be slain by her most trusted companion. If you kill the assassin that kidnaps Anri in preparation for the marriage, she’ll survive long enough to make it to Anor Londo and you’ll be able to help her defeat Aldrich in her own world. However, she’ll eventually turn hollow and insane, and you’ll find her dead in the Catacombs.

What makes Anri the most tragic NPC in Dark Souls III is the fact that she’s probably the most naive and all-around nicest character you’ll find around these parts, but there’s no way to save her from her depressing fate. If you aggro her and Horace at the Road of Sacrifices or Firelink Shrine and you kill Horace first, Anri stops fighting and falls to her knees. She starts muttering that she can’t continue on this journey without Horace, and she’ll just stay on the ground, waiting for you to end her life.

Damn it, From Software. I play Dark Souls III to kill monsters, not to have gross feelings for well-rendered pixels.