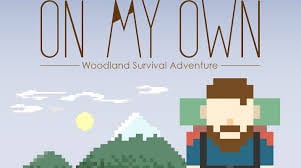 On My Own on PC

Over the last few years, there’s been an emergent trend of simply designed, deceptively difficult survival games. On My Own fits squarely into this growing genre, pitting players against the harsh woodlands and shifting seasons with little but their wits and a small cabin to call home. With a robust crafting system, a variety of biomes to explore, and plentiful forest life to encounter, there’s a lot to explore in your journey to find your place in nature’s world.

On My Own creates an easily-approachable take on the survival genre with its simple user interface. Movement and interaction are relatively simple, and the crafting system fits snugly within the player’s inventory menu to allow on-the-fly creation of your basic needs. Some on-screen prompts guide the early going, helping players get the hang of putting together a campfire and small game traps needed to get a supply of food flowing. Other than this, though, keeping yourself alive in the wilderness is largely up to you.

Unfortunately, this independence is also On My Own’s biggest downfall. With little direction or guidance, navigating the world can be pretty tricky. While the crafting system is well-integrated, the “recipes” themselves aren’t always intuitive. If you’re not quick to pick up some of the basic necessities, you’ll soon find that you’re low on food and struggling to regain your ground. This is especially true in the early game, where resources can be scarce and lacking in variety.

Despite the rough going, On My Own is a much more forgiving kind of wilderness than others in the genre. While survival is still the goal, you’ll find a much less harsh take on the wilds than in the more brutal Don’t Starve and its ilk. In many ways, it feels much more like a camping trip than a man-versus-wild struggle to stay alive, with the game’s simplistic design and soothing soundtrack adding to the more relaxed experience.

This softer approach to the genre makes On My Own a difficult thing to really pin down. Genre fans may find the lesser threats to be a turn-off, though it may make the game appealing to a broader audience. On the other hand, the confusing crafting system and ever-present march towards starvation for those who don’t master it may keep more casual players from finding their fit here. The end result is a game that just doesn’t seem to know where it fits in the market, and it shows.

All that said, On My Own still manages to create an interesting world that’s never quite the same. Seasonal shifts and different map areas add plenty of variety to the woods, and the more relaxed approach to survival affords players plenty of time to explore it all. Asking $7.99 on Steam seems just about right for the content, though the inclusion of some more detailed crafting recipes or guides would go a long way towards making the game really worth it. Still, if you’re curious about the survival genre but find some of the more hardcore entries a bit too harsh, it’s a great way to experience a gentler side of nature’s world.