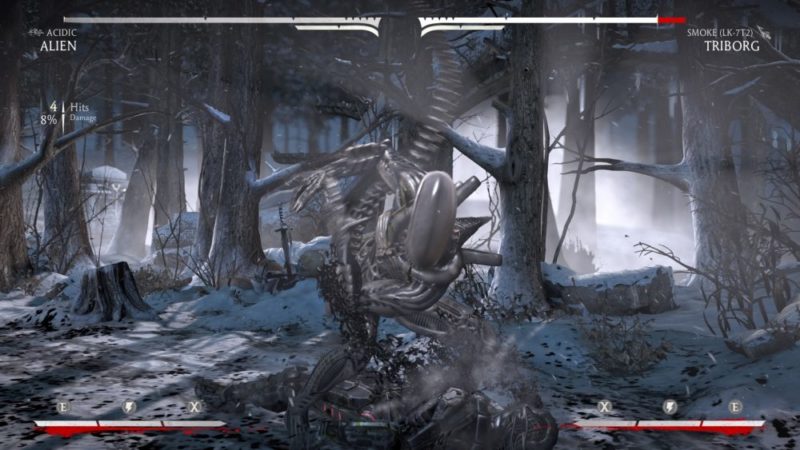 One of the deadliest beings in the entire universe is now available to use in Mortal Kombat X. Alien, you may know it as a Xenomorph, is a quick and cunning fighter that uses it’s incredible range and speed to overpower its target. This new Kombatant has three variations that each have a specific focus for use in battle.

Acidic is the most basic of the three variations, relying on the use of Acid for lingering damage and defense, as well as vicious tail attacks. When using this style of Alien, you want to stay within medium range because its ranged projectiles do not go very far. It will still be difficult for opponents to keep any sort of real distance from you though, as the melee reach on this fighter is unparalleled.

Acidic is perfect for players who feel confident in their abilities and have no need to hang back. It requires quite a bit of aggression, but the fast pace and powerful strikes make up for putting yourself in harms way.

Acidic Specials (commands given for PS4 from a right facing position):

The Konjurer variation relies more on ranged abilities and keeping the opponent at bay. It still benefits from the use of the tail just like Acidic, but there is no acid involved anymore. However, the ability to stun enemies can create many openings for victory as long as you’re patient and use your abilities well.

Konjurer has two special abilities that can be used in close, medium, or long range. These are the Ovomorph and the Drone Drop. The Ovomorph summons an egg from which a Facehugger hatches and attaches to your opponent’s face. If successful, your opponent will be able to do nothing for about 3 three seconds (a long time during a fight).

The Drone Drop calls a second Xenomorph to pounce on your opponent from above. It’s a quick but powerful attack that knocks your opponent to the ground, giving you time to close the distance.

This variation is perfect for those who like to play a close fight but need distractions. Many characters in Mortal Kombat X have serious defensive capabilities, making the up-close approach a bit of a challenge. This allows you to create openings and deliver the pain.

Konjurer Specials (commands given for PS4 from a right facing position):

The Alien’s Tarkatan variation is all about the blade attacks and keeping it close and fierce. There are no distractions or ranged attacks here, just speed and power. Unlike the other two variations, though, Tarkatan can actually close the gap between itself and an opponent thanks to Tarkatan Fury. This rush attack can cover a little more than half the screen, putting you within striking distance. It can also be altered to perform a different attack once in range.

Every other ability relies on speed and juggling as Alien traps opponents in a whirlwind of tail and blade strikes. The lack of acid and range means you’ll have to constantly rush an enemy if you want to win, but each move delivers multiple hits and can lift adversaries off of their feat. That means the closer you are, the safer you are. If you’re a skittish fighter, definitely do not use this variation.

Tarkatan Special Moves (commands given for PS4 from a right facing position):

Survival: Alien’s X-Ray attack can be triggered from close range. The Alien thrust two blades into its opponents mid section before unleashing a barrage of tail strikes. When it’s all said and done, a quick strike to the back of the head with that little mouth thing is delivered to the back of the skull.