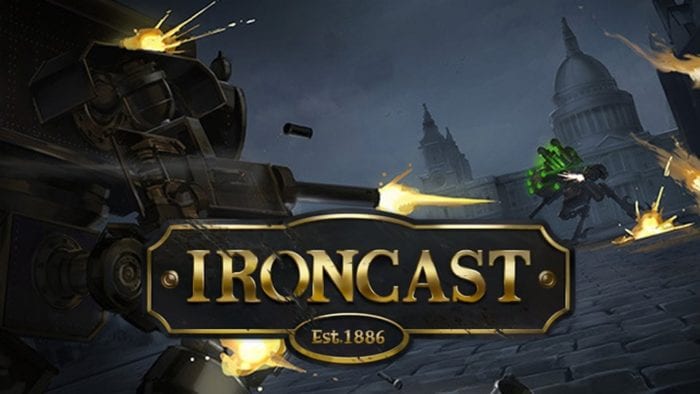 Have you ever thought to yourself that what the gaming world really needs is a steampunk-themed strategic combat game crossed with Bejewelled? If so, I’ve got some great news – Ironcast is here to fill that empty void in your life. If you’re like me, though, you probably never had that thought, but maybe it’s time that we give up on predicting what gaming needs, and taking advantage of the oddities it has to offer.

Ironcast is an alternate-history Victorian-era game set in the midst of a brutal war between England and France over a rare and powerful energy source called Volite. Used to power massive machines of war, this precious substance has transformed the course of human history. Players, in the role of a commander of one of these mech-like creations known as Ironcast, must resist the French invasion of London and push back to defend Queen and Country.

Ironcast’s unique gameplay takes center stage from the moment players set out on the tutorial mission, which introduces the strategic side of things pretty well. While the central area of the player’s screen is dominated by the jewel-matching system that serves as the resource allocation system, the real heart of play is in using those resources wisely to overcome the obstacles in your path. This, as it turns out, is surprisingly deeper than one might initially assume.

Each of the titular Ironcast, whether controlled by the player or enemy, is comprised of four modifiable systems. The first two “slots” represent the machine’s weaponry, and the others the movement and defensive capabilities. Each system can be damaged independently, requiring repairs to function if destroyed. Players may target any of an enemy’s systems during combat, and there are distinct tactical advantages to crippling any of them.

Everything within Ironcast’s missions is turn-based. Each turn consists of three “matches” of various resource nodes, plus whatever other actions the player wishes to use those resources for. The four main resources you’ll collect are ammunition, energy, coolant, and repair. Ammo, of course, fuels weapons. Energy is used for either shields or movement. Coolant is expended when any action is taken to prevent damage-dealing overheating. Repair, of course, is used to restore damaged systems.

In addition to the in-mission resources, Ironcast also includes an experience point system, allowing players to unlock several types of upgrades. These may be upgrades for a single system, general upgrades to your commander or ironcast, or even cooldown abilities that can turn the tide of combat. Scrap, collected by defeating enemies or by matching scrap nodes during play, allows for the purchase of new weapons, shields, or other system improvements, and is also used to repair your hull integrity between missions.

At first glance, Ironcast looks like a bizarre Bejewelled or Candy Crush clone with bolted-on steampunk pieces to add some flair, but it plays very differently. Sure, the matching game is important to your success, but ultimately the strategy and combat are the real focus of progressing and succeeding. The game is largely unforgiving, though the price of a game over is relatively low. In addition, in-game “commendation marks” awarded throughout may be exchanged to purchase new commanders or ironcast to take into the fray on a new run, adding a ton of replay value to the whole experience.

Ultimately, Ironcast stands tall as a much more innovative and deep game than I initially expected. A steep difficulty and solid strategy-first combat system take some getting used to, but intuitive controls and a smooth gameplay experience make it easy to get the hang of on a rudimentary level. Despite some scaling issues with the difficulty that create a rough early going, the randomized rewards system make each new attempt fresh and fun, making the $14.99 price tag on the PlayStation Store and Steam more than fair.

Despite Dead or Alive 6 Crossover, Koei Tecmo Is Still Tiptoeing Around DOA Xtreme’s Existence
To Top