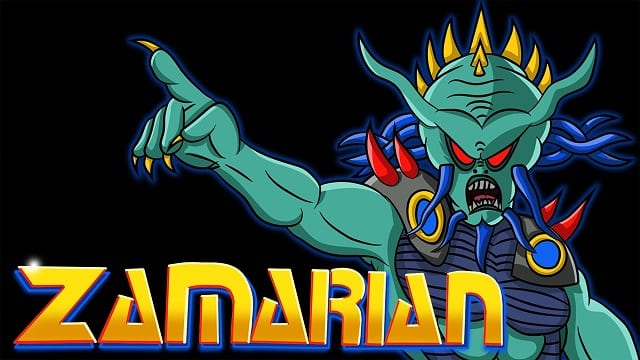 With so many deep, story-focused games hitting the market these days, sometimes it’s fun to pick up something that’s a little more action-oriented. Zamarian certainly fits the bill, feeling in many ways like a classic arcade shooter with some interesting twists. While there’s some rough edges, the gameplay is still fast-paced, fun, and pretty easy to get the hang of.

Zamarian is, in many respects, a pretty typical space shoot-em-up style game. Rather than a standard top-down or side view, though, the player’s perspective is from behind their own ship. Enemies, powerups, and the like emerge from the center of the play area, and players can move both around the circumference of the field as well as some depth control to move inward or outward during play.

With the somewhat unique movement and field of view, Zamarian takes a bit of getting used to. Once players get the hang of the movement, though, dodging enemy fire and collecting powerups becomes mostly easy. The trickier foes can actually exit the play area entirely, looping around off-screen and coming back through from behind the player’s ship. This means that players will have to be mindful not only of emerging threats, but of those who may be on a dangerous return path.

Where Zamarian suffers more than anywhere is the on-screen purchasing system. Displayed as buttons around the edge of the movable field, these allow players to purchase new ships of Light, Medium or Heavy variety, or to buy weapon upgrades to increase their damage. While some keyboard bindings make purchases a little easier, players still have to use the mouse to select the shop “category”, meaning that purchasing anything requires moving your ship to one corner or another.

Another weak point in Zamarian’s gameplay comes from the items themselves. While each of the game’s ships has a clear advantage defensively, the weapons all feel a bit muddled. I was never sure if what I was buying or picking up from a slain enemy was an improvement on what I was already using, or a downgrade. Most of the weapons seem to lay waste to anything short of each level’s boss pretty easily, so maybe it’s a moot point, but some distinction would go a long way to really making the game shine.

In the end, Zamarian does a fine job at being what it sets out to be. The unique perspective and gameplay are just enough to make it worth a look for genre fans, and while there’s some room for improvement with regards to the interface, it’s not the worst design I’ve seen. At a whopping $4.99 on Steam, trying it out isn’t going to put you out much, and while it may not be ground-breaking material, it’s a good ‘pick up and play’ time killer that’s both fun and challenging.